San Miguel Beer coach Leo Austria’s sigh was so pronounced you could hear it even with his face mask and shield on.

After being mangled back-and-blue by an enemy that practically didn’t feel any pressure from the Beermen at all on Sunday night, one would readily understand why Austria was like that.

San Miguel—depleted, exhausted and some say lacking in intensity that very important night—suffered a 90-68 beating at the hands of Meralco, as the Beermen’s half-a-decade reign in the PBA Philippine Cup came to a screeching, unceremonious halt at Angeles University Foundation powered by Smart 5G.

“We’re really disappointed with the outcome,” Austria told reporters here in Filipino. “It was unpleasant from start to finish.”

“We were really expecting it (KO game) to be a close fight, but we were simply overwhelmed by the intensity of Meralco,” he added.

Already playing without cornerstone June Mar Fajardo, the Beermen struggled to match the Bolts’ zest and got buried in holes as deep as 28 points, quite uncharacteristic for a team with so much talent—shorthanded or otherwise—and with a proud tradition to uphold.

Austria blamed the lack of preparation and one too many injuries which spelled doom for the team that clung to the Philippine Cup trophy like a family heirloom for the last five seasons. He also took a shot at his relievers for failing to deliver while hinting at rebuilding to infuse younger blood to the nucleus.

“Imagine, I am relying [so much] on our starters. A strong lineup. But they’re not a hundred percent,” he said.

In fact, even Mo Tautuaa, San Miguel’s deadliest scorer in this extraordinary tournament, was playing through a mild sprain and recurring tendinitis.

Alex Cabagnot, who sat out the first match against the Bolts, hasn’t fully recovered from a hamstring injury. Chris Ross, the team’s defensive ace, played with an injured hand.

Austria also did not make it a secret that he has one of the oldest—if not the oldest team in the tournament. And that playing back-to-back game took its toll on his charges’ battle-weary legs.

San Miguel was already dealt with a bad hand after missing Fajardo to rehabilitation of his right leg and Matt Ganuelas-Rosser to family chores. But things took a turn for the worse when Terrence Romeo, easily the Beermen’s best shot-creator, suffered a season-ending shoulder injury just three games into the team’s record-extending title bid.

“I wish we never lost the other players. June Mar’s case was a given. But Terrence and Matt? They have big roles in this team. We have a scorer and a defender in those two guys,” Austria said.

If Austria had his way, he wouldn’t want to extend the usage of his stars. But he didn’t get the mileage he needed from players coming off the bench.

“We needed substitutions. The problem is, whenever we made substitutions, we gained nothing [from the reserves],” he said. 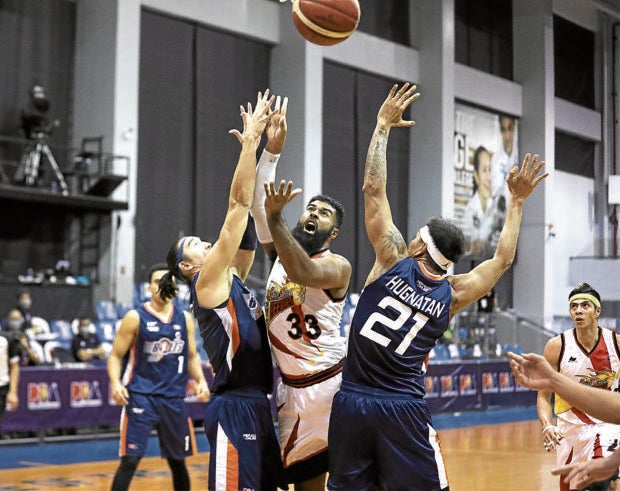 The Meralco defense made life hard for Mo Tautuaa (center) and the Beermen. —PHOTOS COURTESY OF PBA IMAGES

On Sunday, San Miguel’s bench was only able to account for five points as opposed to Meralco’s 32.

“We were able to catch up—up to 8 points, I think. But we could not sustain it. It was like a race. Our tank was at 50 liters. Meralco had 70,” Austria said. “We want to win. But the problem is, how can we with the kind of [manpower] situation [we’re in]?”

And as Austria looked at the rearview mirror revisiting what went wrong, he was also confronted with what lies beyond.

“We’re not getting any younger,” he admitted. “So probably, we’ll talk to management regarding the composition of our lineup.”

“There’s been a lot of clamor from the fans, from the basketball experts. I think we’re the oldest team in the league, and our starters are averaging 34 years old. Our opponents, meanwhile, are 27, 28—all in their prime,” he said.

Fajardo, for his part, is turning 31 later this month.

“If this was a regular season, we could [easily] adjust. But playing every other day, playing back-to-back games? It’s hard for our players,” Austria said.

“We cannot survive teams that are getting better and better and are gaining more experience. They’ll be able to catch up with the [edge in] talent that we have,” he added.

And as Austria made his way to the team bus the morning after, he couldn’t help but ponder on the what ifs.

“Imagine if we were complete and healthy. I really think we could have put up a better fight.” INQ