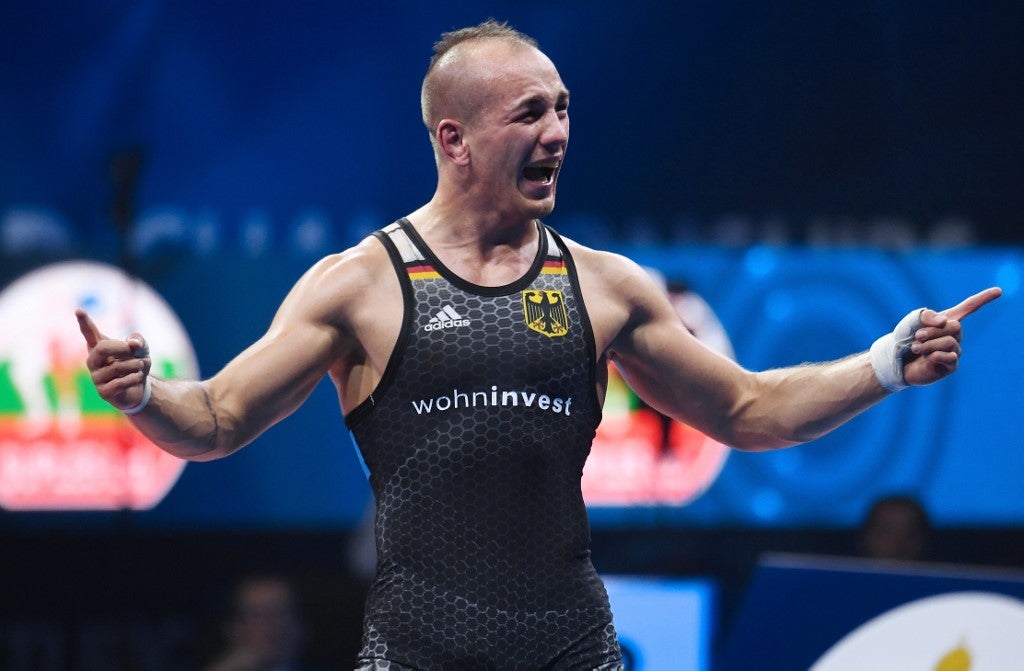 Germany’s Frank Staebler celebrates his victory over Hungary’s Balint Korpasi (not pictured) after the final of the men’s Greco-Roman style -72kg category at the World Wrestling Championships in Budapest, Hungary on October 26, 2018. (Photo by ATTILA KISBENEDEK / AFP)

Germany’s three-time wrestling world champion Frank Staebler says he is struggling to recover from a lung problem caused by the coronavirus, which has forced him out of next month’s planned World Cup in Belgrade.

Staebler won the third gold of his career in the 72kg category when the 2018 world championships were held in Budapest.

After a season disrupted by the COVID-19 pandemic, Staebler had hoped to compete at the World Cup, scheduled for December 12-20, until he contracted the virus.

“I’m having a hard time with it. I want to fight, I’m in the final spurt of my career,” Staebler, who is based near Stuttgart, told AFP subsidiary SID.

The 31-year-old caught the illness in October.

However, after a two-week quarantine, he noticed something was wrong when he returned to light training.

Staebler estimates his lung capacity is 20 percent down compared to before he fell ill.

“I had mild symptoms, like a slight cold. I couldn’t taste or smell anything,” he said.

However, when he returned to training “during a stress test, I had a real slump, my pump (heart) was burning like hell”.

A diagnostic test revealed his lungs were affected, which he treats with a spray.

Competing in Belgrade was not an option.

“I had so hoped to go,” he said, “it was intended as an interim goal on the way to the (2021) Olympics in Tokyo. I need the competitions.”

Having failed to win medals at London 2012 and Rio de Janeiro 2016, Staebler wants one more chance at an Olympic medal if the summer Games go ahead as planned in Japan next July.

Staebler hopes to compete at the European Championships next February in Poland, when he should have fully recovered from COVID-19 and a persistent shoulder injury.

He issued a warning to anyone dismissive of the virus.

“I can only say to young people who feel as unassailable as I did… even for non-risk groups there can be severe consequences,” he told Frankfurt-based newspaper FAZ.

“I want to serve as a warning, which is why I have made my illness public.”