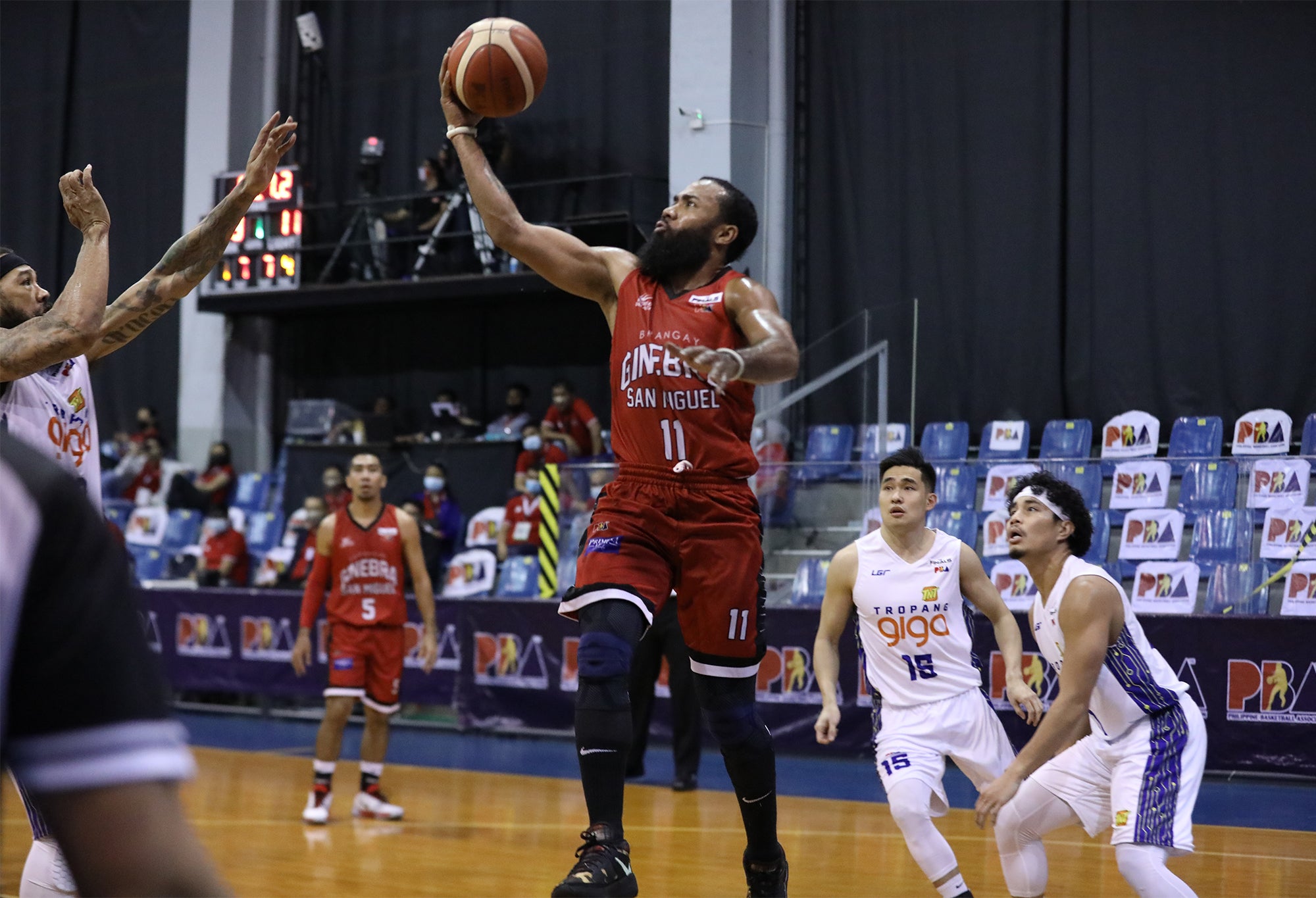 After putting out third quarter fires, Aljon Mariano made it clear Barangay Ginebra hadn’t accomplished much yet on Wednesday night.

“We haven’t won anything,” he said in Filipino. “We’re up but it’s still the same; it’s a race-to-four series and the team that wins four games wins the championship.”

But it’s a pretty comfortable cushion to be sitting on when you’re halfway through that goal and the opponent still has to win a game. That’s where the Gin Kings currently are after a 92-90 victory over TNT gave them a commanding 2-0 lead in the PBA Philippine Cup Finals.

And to think they almost let this one slip away.

Ginebra trailed by 15 in the third period before Mariano reeled off 10 points in that quarter to keep the Kings withing striking distance. His last basket capped a 27-12 exchange that tied the count at 68 before Poy Erram gave TNT some breathing room—and a two-point lead—with a basket before the buzzer.

“Aljon’s contribution was just exceptional,” Ginebra coach Tim Cone said. “AJ doesn’t back down from anybody that’s why we love him so much.”

“He’s our tough guy. He really comes out to play all the time. That’s a guy that often times we lack in this team. He’s that valuable,” Cone added.

TNT restored its control of the match in the fourth, claiming a seven-point lead with 4:15 remaining in the game after RR Pogoy’s triple pushed Ginebra down a 77-84 hole.

Mariano made two free throws and the Ginebra defense forced TNT to six missed field goals and two turnovers the rest of the way, allowing Ginebra’s usual guns to hit the dagger shots. Stanley Pringle nailed a three-pointer and two free throws to tie the game at 84, before Scottie Thompson nailed a triple—his only field goal for the game—that erased Jayson Castro’s tie-breaking split and gave the Kings the lead for good, 87-85, 30 seconds remaining.

LA Tenorio then made the cushion free throws that helped Ginebra keep TNT at bay.

“Having LA and Scottie down there [in the stretch] means a lot,” Cone said.

TNT, meanwhile, had five players in double figures as the Tropang Giga tried to make up for the absence of top gun Ray parks Jr., who missed Game 2 due to a strained calf. Pogoy led the assault with 38 points on just 22 shots from the field. He made five out of nine triple attempts for the night. One of those missed triple could have knotted the count late in the game.

Parks is expected to return for Game 3 of the best-of-seven affair on Friday, a virtual do-or-die outing for the Tropang Giga.

Cone, like Mariano, isn’t resting too much on that two-game cushion.

“Two-zero lead means nothing against TNT,” Cone said. “The game was only separated with a couple of shots. How can we be comfortable at this point knowing they were able to dominate us in this game?”

The Tropang Giga were indeed dominating early on. Led by Pogoy and Castro, TNT kept finding holes in Ginebra’s defense, with Pogoy scoring 10 points out of the halftime break that put TNT up by 15, 56-41, seven minutes to play in the third. But Mariano and the Kings slowly chipped at that lead to set the stage for the thrilling endgame.

“When they started to stretch the lead out we didn’t panic,” Cone said.

And in keeping their poise, the Kings have put the pressure on the Tropang Giga going into Friday’s Game 3. And it’s TNT’s turn to have a hand hovering above the panic button.