Wolff on Russell: A star is born and sky's the limit | Inquirer Sports

Wolff on Russell: A star is born and sky’s the limit 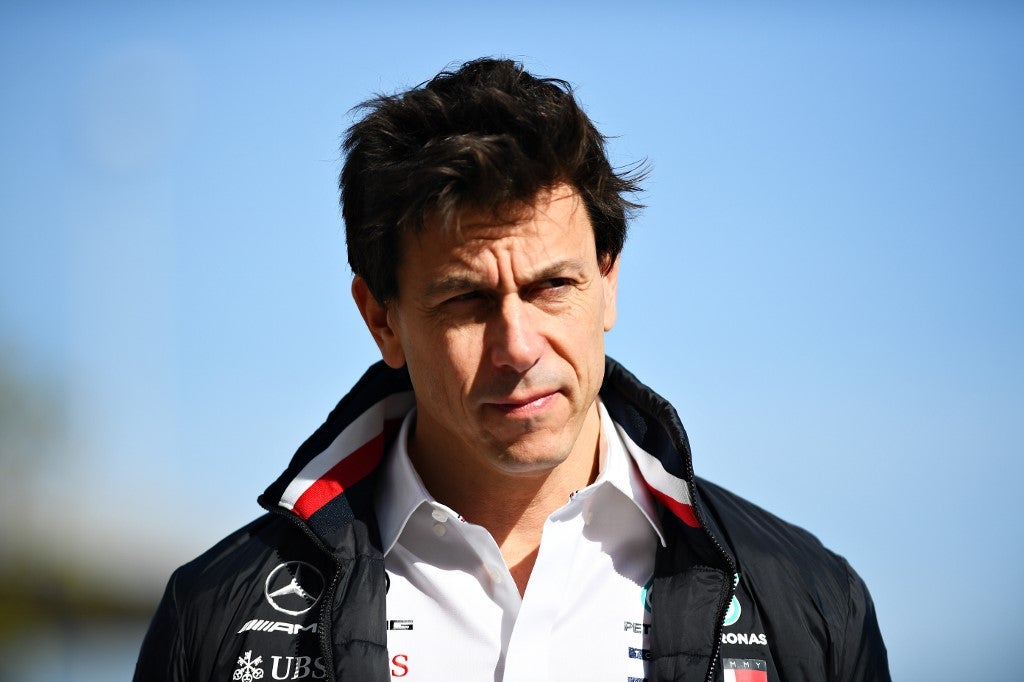 AUSTIN, TEXAS – NOVEMBER 02: Mercedes GP Executive Director Toto Wolff walks in the Paddock before final practice for the F1 Grand Prix of USA at Circuit of The Americas on November 02, 2019 in Austin, Texas. Clive Mason/Getty Images/AFP

The sky’s the limit for George Russell after the British youngster’s stellar performance as Lewis Hamilton’s stand-in at the Sakhir Grand Prix, according to Mercedes Formula One team boss Toto Wolff.

The 22-year-old seized his opportunity to shine in Sunday’s race in Bahrain and cemented his status as a full-time Mercedes driver in waiting, even if hopes of a stunning victory were cruelly dashed.

“It’s not going to be his last attempt to win a race, it’s just the beginning of a fairytale that didn’t work out today,” Wolff told Sky Sports after congratulating and commiserating in equal measure. “I would say that a new star is born.

“Lewis is the absolute benchmark, that is what his record says and nobody is anywhere near him. But today we have seen that there is a new generation coming up that can be really strong,” added the Austrian.

“They are very young, in their early 20s. The sky is the limit.”

Esteban Ocon, the 24-year-old Frenchman who was a Mercedes young driver before moving to Renault, finished second in Sunday’s race with 22-year-old Canadian Lance Stroll third for Racing Point.

Racing Point’s Sergio Perez was a first-time winner at 30 but the grid is full of young talent — Red Bull’s Max Verstappen and Ferrari’s Charles Leclerc already multiple race winners and still only 23.

McLaren’s Lando Norris is 21 — the same age as Michael Schumacher’s son Mick, crowned F2 champion on Sunday and debuting with Haas next year.

AlphaTauri’s Pierre Gasly, another first-time winner this season, is 24.

Russell may be back in a tail-end Williams for next Sunday’s Abu Dhabi season-ender, depending on seven times world champion Hamilton’s recovery from COVID-19, but the stand-in made sure he stood out.

Mercedes regular Valtteri Bottas, confirmed for next season, could be on borrowed time.

Russell led both Friday practice sessions, qualified on the front row within milliseconds of polesitting Bottas, seized the lead at the start, comfortably had the measure of the Finn and set the fastest lap.

Only a Mercedes tire mix-up, an extra pitstop and then a late puncture after a charge back to second denied him a first victory. He ended up ninth.

It was still, as Wolff recognized, a ‘monumental’ performance.

“I gave it everything I had. I was managing the race at the start, I felt confident and comfortable in the opening laps, just managing the gap to Valtteri,” said Russell.

Three points were scant reward, even if the first in Formula One for the 2018 Formula Two champion after nearly two barren years with Mercedes-powered Williams.

When he stepped out of the car, the hurt was real — not just because he was wearing shoes a size too small to fit into the cockpit more easily — but so too was the sense of achievement.

“Hopefully I’ve given Toto some problems to sort out for the future. I’m happy. I’m proud,” he said.