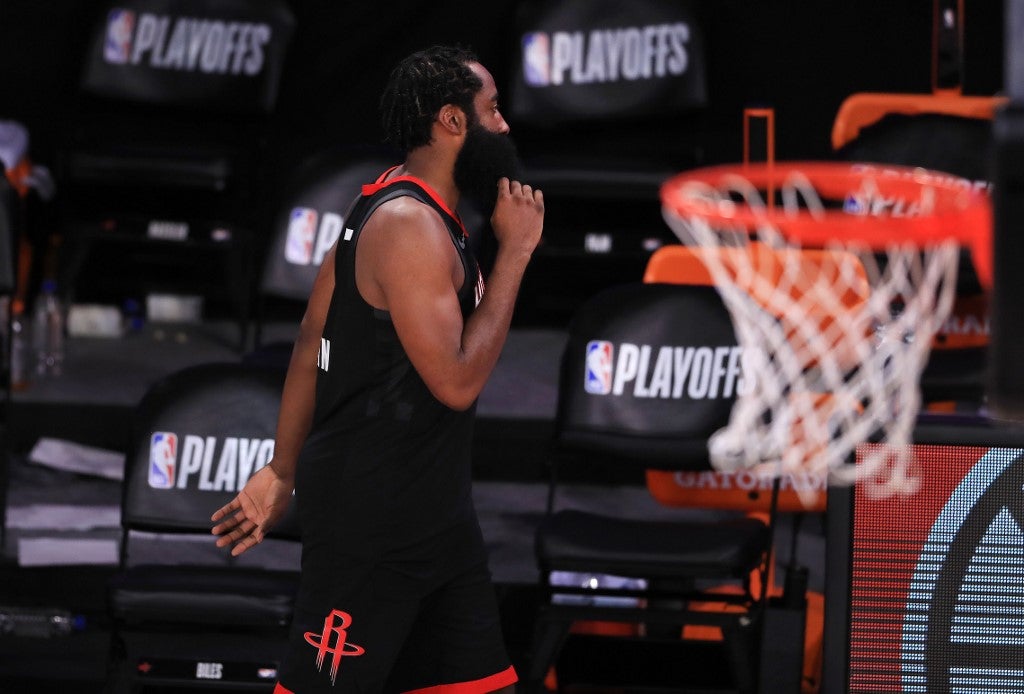 FILE — James Harden #of the Houston Rockets exits the court after their loss to Los Angeles Lakers in Game Five of the Western Conference Second Round during the 2020 NBA Playoffs on September 12, 2020 in Lake Buena Vista, Florida. Michael Reaves/Getty Images/AFP

James Harden added optional paths to his exit strategy out of Houston.

The Athletic reported Thursday that Harden officially made a trade demand and the Rockets’ All-Star included the Milwaukee Bucks and Miami Heat on a new list of destinations he’d prefer.

Harden previously informed the Rockets through his agent that he was willing to accept a trade to the Brooklyn Nets or Philadelphia 76ers.

The Rockets, under new management with team president Daryl Morey and head coach Mike D’Antoni gone, are expecting a major haul in return for the eight-time All-Star, The Athletic reported.

Harden became uncertain of his future with the Rockets after another playoff exit was followed by D’Antoni stepping down and Morey leaving for the same post in Philadelphia.

But Harden, 31, reportedly said he doesn’t see Houston as a contender for an NBA title.

The Bucks made multiple moves in the offseason and parted with significant draft capital to land point guard Jrue Holiday. The team faces a Dec. 21 deadline to sign Giannis Antetokounmpo to a five-year supermax deal or risk the 26-year-old entering free agency next summer.

Antetokounmpo said recently he’d welcome the arrival of another star player, and Harden would feasibly qualify as a former MVP and three-time scoring champion.

The Heat surprised last season as Eastern Conference champions, and with Pat Riley at the controls, making a run at star players is always a consideration.

Miami could offer a blend of young players and draft picks to entice the Rockets, but the Heat are also thought to be holding their cash and assets for a chance to land Antetokounmpo. Harden unquestionably could fill a role as a volume scorer with either team. His style of play isn’t a precise fit for Miami, which has a swing offense predicated on ball movement and thrives on defense.