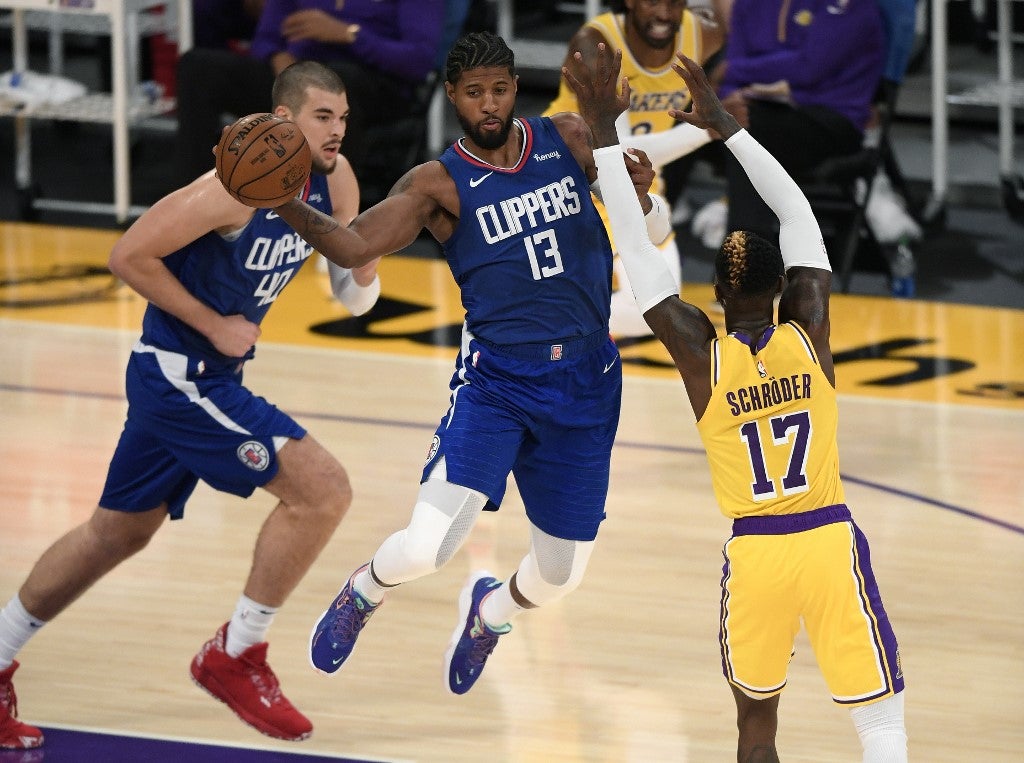 Paul George #13 of the LA Clippers passes around Dennis Schroder #17 of the Los Angeles Lakers during the season opening game at Staples Center on December 22, 2020 in Los Angeles, California. Harry How/Getty Images/AFP

Paul George scored 26 of his 33 points in the second half, and the Los Angeles Clippers defeated the host Los Angeles Lakers 116-109 on Tuesday in the season opener for both teams.

Before the game, the Lakers handed out rings celebrating their 2019-20 NBA championship.

George converted 13 of 18 shots from the floor, including 5 of 8 from 3-point range. Kawhi Leonard scored 26 points, Serge Ibaka added 15 Ivica Zubac and Lou Williams contributed 11 each and Patrick Beverley chipped in with 10.

The Lakers never led. Two free throws by Markieff Morris three minutes into the fourth quarter allowed them to close within 96-90 with 9:01 left, but the Clippers answered with a 13-4 run for a 15-point lead after a bucket by Leonard with 4:51 remaining.

After Schroder scored on a layup to tie the score at 75 with 5:04 left in the third quarter, George sparked a 14-3 surge by scoring 10 straight Clippers points for an 89-78 edge heading into the fourth. George’s 15 points in the third helped the Clippers outscore the Lakers 33-24 in the period.

The Clippers bolted out to an early advantage, leading by as much as 22 points in the first quarter. The Clippers owned a 39-19 lead after one period.

An 11-2 run by the Lakers cut the gap to 41-30 after a 3-pointer by Kentavious Caldwell-Pope midway through the second quarter. The Lakers sliced the deficit to 53-50 on a dunk by James with 1:39 remaining in the second.

James’ three-point play with about a minute left in the quarter capped the first-half scoring, helping the Lakers pull within 56-54 at the break. The Lakers outscored the Clippers 35-17 in the second quarter.