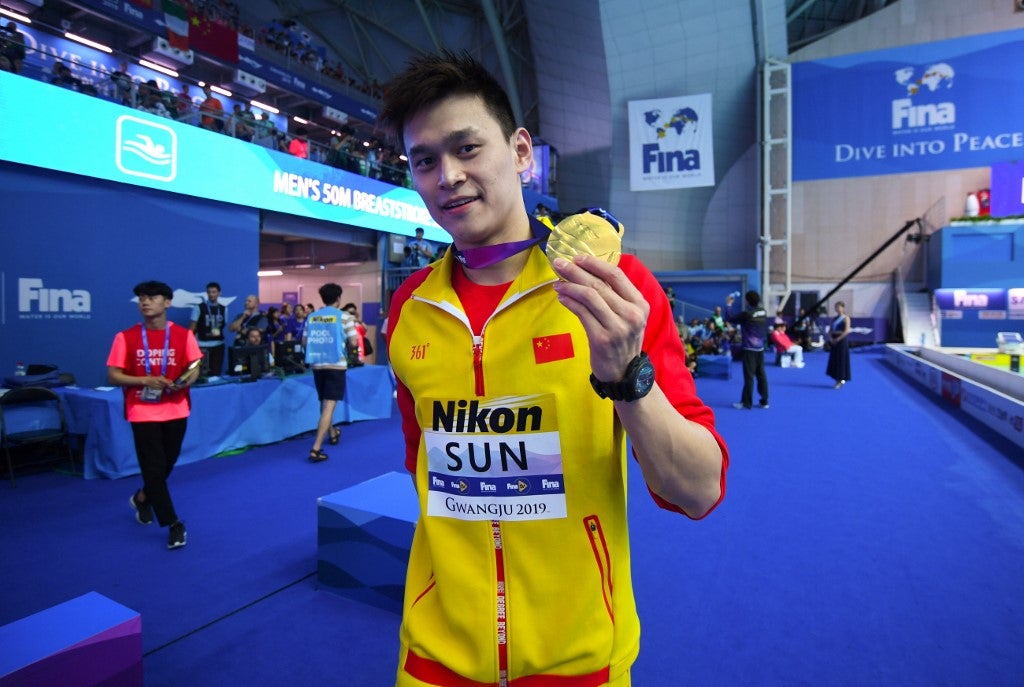 (FILES) In this file photo taken on July 23, 2019 China’s Sun Yang poses with his gold medal after the final of the men’s 200m freestyle event during the swimming competition at the 2019 World Championships at Nambu University Municipal Aquatics Center in Gwangju, South Korea. – Switzerland’s top court on December 24, 2020 has overturned an eight-year doping ban on Chinese swimmer Sun Yang imposed by the Court of Arbitration of Sport in February. The decision comes seven months before the Tokyo Olympics and is welcome news for the triple Olympic champion who is accused of destroying a sample with a hammer when collectors visited his home in September 2018. (Photo by Ed JONES / AFP)

The 29-year-old — the first Chinese swimmer to win Olympic gold — will now have a chance to state his case again at a second hearing by the Court of Arbitration for Sport (CAS), based in the Swiss city of Lausanne, before the Tokyo games next year.

He is now free to compete until his case is heard again, meaning he could aim to defend his 200m title in the delayed Olympic games.

The swimmer is accused of destroying a blood vial with a hammer when collectors visited his home in September 2018 during an out-of-competition doping test.

The Swiss Federal Supreme Court said in a statement on Thursday that it had “approved the request by the Chinese swimmer Sun Yang for revision of the arbitral award of the Court of Arbitration for Sport (CAS) in Lausanne dated 28 February 2020… on the grounds of bias of one of the arbitrators of the CAS”.

“The award of the CAS is set aside. The CAS will have to render a new award in the case of Sun Yang in a different composition of the panel,” the federal court said.

The ban had sent shockwaves through China’s sporting world, given the 1500m freestyle world record-holder’s stature in his homeland and the severity of the punishment was greeted with disbelief by his fans.

Sun, who has 11 world championships under his belt and won two golds at the 2012 London Olympics and one in Rio de Janeiro in 2016, had said in February he would fight the ban till the end and defended his action saying the doping testers who went to his home were not qualified.

“I believe in my innocence! Believe in the truth and defeat the lie!”

Sun also served a three-month doping suspension in 2014 for taking the stimulant trimetazidine, which he said he took to treat a heart condition.

The ban was not announced until after it ended and he never missed a major event.

Australian swimmer Mack Horton and Scottish swimmer Duncan Scott had refused to share a podium with Sun at the World Championships in South Korea in 2019, calling him a drug cheat.

Sun’s lawyer Zhang Qihai said he would pursue a case against a sample collector who he said used “false proof.”

The World Anti-Doping Agency said the move “upholds a challenge against the chair of the CAS Panel and as such has no bearing on the substance of the case”.