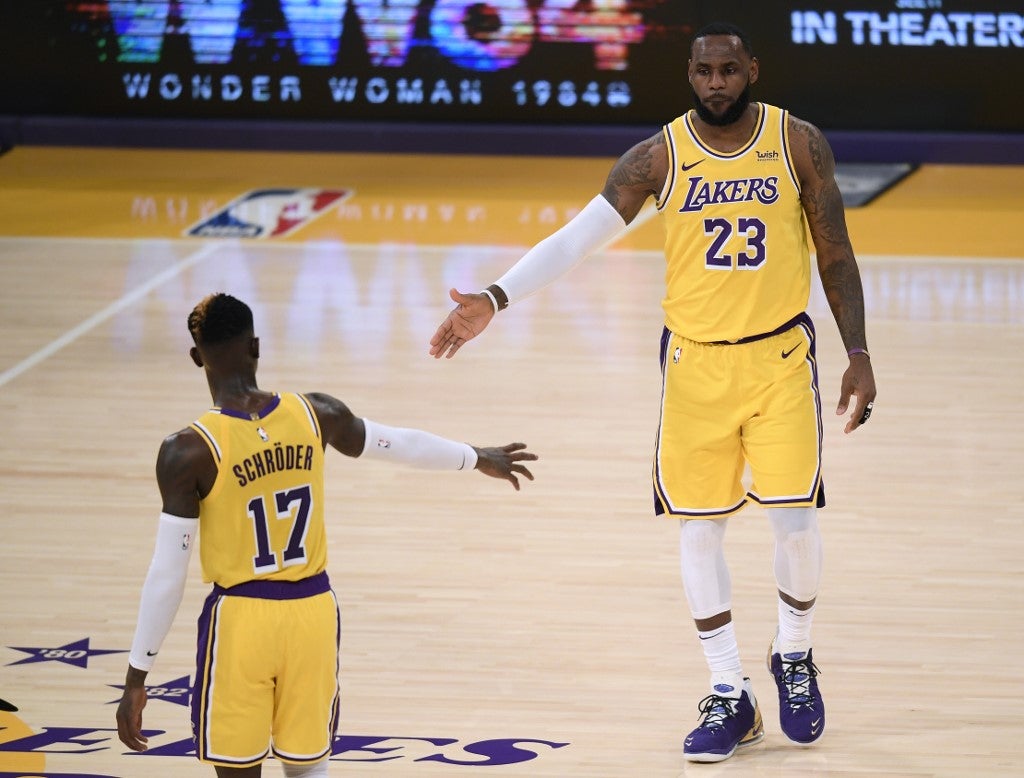 LeBron James #23 of the Los Angeles Lakers celebrates a play with Dennis Schroder #17 during a 116-109 LA Clippers win in the season opening game at Staples Center on December 22, 2020 in Los Angeles, California. NOTE TO USER: User expressly acknowledges and agrees that, by downloading and or using this photograph, User is consenting to the terms and conditions of the Getty Images License Agreement. Harry How/Getty Images/AFP

LeBron James and the Los Angeles Lakers anticipate a stiff test on Christmas Day when they host Luka Doncic and the Dallas Mavericks.

The matchup against the Mavericks will allow James and the Lakers an opportunity to wipe out the sour taste of Tuesday’s season opener when they dropped a 116-109 decision to the Los Angeles Clippers on a night they celebrated their NBA title with a ring ceremony. James led the Lakers with 22 points before sitting out much of the fourth quarter after tweaking an ankle.

However, he said the injury won’t sideline him against the Mavericks.

“I’ll be ready to go tomorrow on Christmas Day,” James said. “I’ve never missed a Christmas Day game, so I don’t plan on missing one tomorrow.”

Anthony Davis added 18 points and seven rebounds for the Lakers, who trailed by as many as 22 early on against the Clippers before rallying. However, they faded down the stretch.

“Well obviously, we didn’t play to what we wanted to do in the first quarter, and they came out like gangbusters and hit us in the mouth,” James said. “We were able to withstand that, get back into the game and make a game out of it.

“They did a good job of closing the third quarter out and kind of spreading that lead and we weren’t able to get back into the game after that but it’s game one. It’s the first test for us.”

Doncic and the Mavericks also failed their season-opening test Wednesday in a 106-102 loss at the Phoenix Suns. Doncic had 32 points on 11-of-26 shooting, missing all six of his 3-point attempts, with eight rebounds and five assists.

“He’s still getting his game legs under him,” Dallas coach Rick Carlisle said, according to the club’s website. “That will get there. But he understands the game as well as any 21-year-old I’ve ever been around. He’ll make the adjustments that are necessary.”

Josh Richardson, who the Mavericks acquired in an offseason trade for Seth Curry and a second-round pick, contributed 12 points and seven boards against the Suns. Tim Hardaway Jr. and Jalen Brunson also scored 12.

Carlisle said the Mavericks will need a better effort to beat the Lakers.

“We got to look at this and really study ourselves and see the things we need to clean up,” Carlisle said, according to the team’s website. “And then we’re going to have to do a study on the Lakers, figure out what the best matchups and coverages are going to be for us defensively. Look, that’s the world champs. We’re obviously going to have to play a high-level game.”

Dallas will be without center-forward Kristaps Porzingis, who is recovering from offseason knee surgery and isn’t expected back until January.