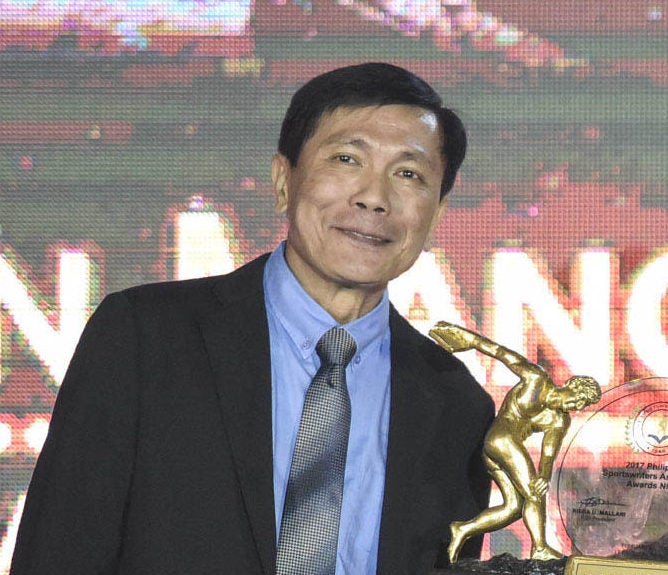 The third-floor landing of the iconic spiral staircase of the Philippine Daily Inquirer building is a multipurpose lobby that serves as a reception area, a party place and sometimes as a fine-dining or cocktails venue for visiting dignitaries, show biz stars and even boxing champions. Back in 2003, it also served as a smoking area where editors, reporters, photographers and other occupants of the newsroom shared office gossip and vented their work-related frustration.

This was where Teddyvic Melendres was quietly pacing one day as he lighted up one stick after another. He was an editor of the Inquirer Libre, the country’s first free newspaper which he helped organize upon his return from his stint in Hong Kong.

Beyond the glass panel that separated the lobby from the newsroom was the sports section where two veteran sports editors were going over a list of candidates for the vacant position of sports editor. The two veterans had been tasked to lead that search and to man the sports desk in the interim. The search had been futile for two months, but as they looked up from the list, they saw a sprightly figure beyond the glass panel, furiously pacing and puffing away like there was no tomorrow. There’s our man, the two concluded.

Seriously? Teddyvic as sports editor? That was the initial reaction of Inquirer president Sandy Prieto-Romualdez. “Teddy who?” asked editor in chief Letty Jimenez-Magsanoc. How Teddyvic Melendres became the longest-serving sports editor of the country’s No. 1 newspaper is a story I’ll never get tired of telling and retelling.

After stints as sportswriter for Champ Magazine, the Daily Express, both defunct, and the People’s Journal, Teddyvic went to work in Hong Kong in mid 1990s as subeditor of one of its major dailies, the Hong Kong Standard. It was where he honed his copyreading skills; it was also where the Inquirer bosses discovered him. Highly recommended by other Hong Kong-based Filipino journalists for his work ethic, his experience and his mastery of his copyreading craft, the Inquirer offered him a job.

Away from his family for years and his Hong Kong contract expiring, Teddyvic came home in 2001 and got on board to help put together Inquirer Libre.

Rappler’s Chito de la Vega, a former Inquirer sportswriter and one of the Libre’s original editors, remembers Teddyvic’s first day in the Inquirer. “It was Ted’s birthday,” he recalls. How can one forget a guy who treats his officemates to dinner on his first day at work? The seeming incongruity, Chito noted, was heightened by the piped-in music of Gilbert O’Sullivan (Alone Again, Naturally) inside a Vietnamese noodle restaurant on Jupiter Street in Makati.

Also incongruous, it seemed to the women bosses of the Inquirer, was the idea of Melendres as sports editor. He seemed so quiet. What did he know about sports? Their hesitation, however, soon vanished when briefed of Ted’s sportswriting background.

“I didn’t know he was a sportswriter, but I know how he works hard. Let’s get him for sports,” I recall Sandy as saying. And the rest, as I always say, is history.

Ted went on to beef up the Inquirer sports section, hiring new talents that included current sports editor Francis Ochoa, and jazzing up the sports pages into a dynamic action-packed section. He presided over the Inquirer’s memorable sports coverages in the 21st century, including three events which he covered himself—the Olympic Games in Beijing (2008), London (2012) and Rio de Janeiro (2016). He covered the world’s fastest swimmer (Michael Phelps) and the fastest runner (Usain Bolt) and chronicled the triumph of Hidilyn Diaz, the weightlifter who broke the country’s 20-year medal drought by bagging the silver in Rio and becoming the first Filipino woman to win an Olympic medal.

As an editor, Ted was unassuming and low-key, preferring to be behind the scene while generous with bylines for his staff. For a journalist, he was shy. But he was not bashful when it came to pointing out to careless reporters their lapses in grammar and usage. He was also as hard-nosed as anyone in the newsroom, be it in the sports section or in the newsdesk. He was a respected leader of his troops.

Once, when a caption misidentified a warplane in a picture in the news pages, he was adamant with his correction. He should know—his father Vicente was an officer of the Philippine Air Force and he grew up next to the Fernando Air Base in Lipa City in Batangas. This Batangueño knew his military—he could even identify the type of military aircraft only by the sound of its takeoff.

Living near the base also had other perks for Ted. The base had an 18-hole golf course, where he learned to play the game early in his life, though his clubs were not as mighty as his pen. This made him a butt of jokes of other sportswriters and editors who were more proficient with the game despite having picked it up at a later age. Though a high-handicapper with an atrocious swing, he had the temperament of an ideal golfer—patient, persevering and gracious. He was a regular in media golf events, including the annual PAL Interclub media tournament, which he won in 2014 in Bacolod, the high point of his golfing career.

As a sports editor, Ted was well respected by the sports journalism industry. He was elected president of the Philippine Sportswriters Association, the country’s oldest media organization and he served for two years until 2011.

Toward the latter half of the past decade, the Inquirer faced a serious crisis. The country’s No. 1 newspaper was about to lose its senior editors to retirement. Nowhere near retirement age, Teddyvic was plucked out of the sports section in 2017 and was moved up to the news desk to fill the gap during the transition to younger set of editors and to lend depth and experience to the new generation. Reluctantly at first, Teddyvic accepted his role and, by early 2018, Teddyvic was already part of the rotation of editors closing the news and front pages.

It also marked the start of his physical deterioration. Initially diagnosed with a heart condition that forced him to give up golf, if not his smoking, Teddyvic was later found to be afflicted with amyotrophic lateral sclerosis (ALS), a degenerative disease that is, ironically, named after a sports hero—American baseball great Lou Gehrig. It’s the same ailment that inspired the Ice Bucket Challenge a few years ago to raise awareness of the debilitating ailment. With no known cause or cure, the disorder slowly took its toll on Ted’s body and eventually forced him into retirement.

On July 10, last year, Ted worked for the last time. I showed up at the Inquirer newsroom for the first time in 19 months to crash his send-off party. I had wanted him to take over my position as news editor, but I was happy enough to see that he had taken my old work station at the center of the newsroom. Four months later, our small fraternity of golfers and colleagues visited him at his residence in Sta. Rosa, Laguna for his 59th birthday. He welcomed us, and later bade us goodbye, with his trademark smile. That smile was the last image we saw of him.

Early on Friday, Christmas Day, he went to sleep for the last time. By nightfall, as quietly as he entered our lives, Ted slipped away. At 5:35 p.m., he breathed his last. He was 60.

Ted is survived by his wife, Maria Nelanie, sons Ted Andrei, Ted Leonid and Ted Sergei and sisters Julie, Myrna, Emmie and Glacie. Today, his body will be brought to Lipa, where his journey started, and will be buried on Wednesday. —CONTRIBUTED