James finished with 26 points to extend his already record streak of double-digit games in the regular season.

He sealed the milestone midway through the second quarter with a turnaround jump hook that gave the Lakers a 46-37 lead.

“I’ve been blessed to play the game that I love for 18 years and hopefully I can continue to play at a high level,” he said.

James’ double-digit scoring streak began on January 6, 2007, when he was playing for the Cleveland Cavaliers.

“It’s a tribute to his tenacity level … his commitment to excellence,” Spurs coach Gregg Popovich said before the game. “He deserves a lot of credit for being the consummate professional. His mental state along with his physical state really makes him really special.”

Shortly after James reached the milestone, Popovich was ejected from the contest for arguing with officials.

Assistant Becky Hammon took over on the Spurs bench, becoming the first woman to direct a team in an NBA game.

Wesley Matthews had his best game since joining the champions, scoring 18 points off the bench as he made all six of his three-point attempts.

In early action, the Miami Heat rebounded from an embarrassing 47-point loss to Milwaukee with a 119-108 NBA victory over the Bucks. MIAMI, FLORIDA – DECEMBER 30: Bam Adebayo #13 of the Miami Heat dunks against the Milwaukee Bucks during the third quarter at American Airlines Arena on December 30, 2020 in Miami, Florida.   (Michael Reaves/Getty Images/AFP)

The Heat didn’t have to wait long for revenge as they hosted the Bucks for the second straight night.

Goran Dragic came off the bench to lead Miami with 26 points, Bam Adebayo added 22 points, eight rebounds and 10 assists and Tyler Herro scored 21 points with a career-best 15 rebounds as the Heat rallied to stave off another home defeat.

The Bucks had dominated on Tuesday with an NBA-record 29 three-pointers in their 144-97 triumph.

The Bucks, fueled by a triple-double of 26 points 13 rebounds and 10 assists from two-time NBA Most Valuable Player Giannis Antetokounmpo, looked like making it two wins in a row when they led by 14 in the third quarter.

Donte DiVincenzo scored 15 points and Jrue Holiday added 13 for the Bucks, but the Heat rallied despite missing Jimmy Butler for the second straight game.

“You want to constantly develop some grit and toughness during the course of a long season, and our guys responded in an appropriate fashion,” said Heat coach Erik Spoelstra, who acknowledged before the game that there was “a lot of anger and frustration” after the blowout loss on Tuesday.

“As well there should have been,” he said.

In Brooklyn, Kyrie Irving scored 17 of his 25 points in the fourth quarter and Kevin Durant added 33 points, 11 rebounds and eight assists as the Nets dealt the Atlanta Hawks their first defeat of the young season, 145-141. NEW YORK, NEW YORK – DECEMBER 30: Kyrie Irving #11 of the Brooklyn Nets attempts a layup as Trae Young #11 of the Atlanta Hawks defends during the second half at Barclays Center on December 30, 2020 in the Brooklyn borough of New York City. The Nets won 145-141.  (Sarah Stier/Getty Images/AFP)

The Celtics led by 12 points after the opening quarter and took full control with a 17-0 scoring run in the second period. 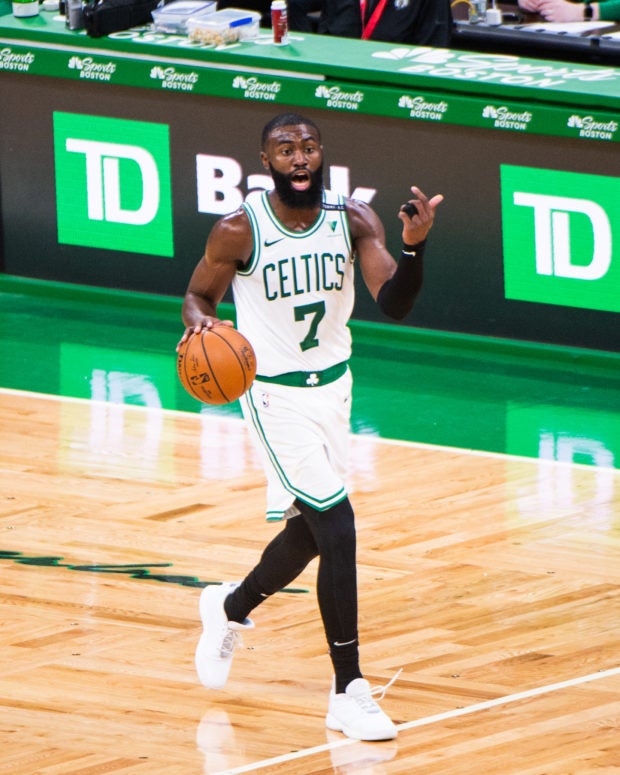 BOSTON, MA – DECEMBER 30: Jaylen Brown #7 of the Boston Celtics dribbles the ball in the first half against the Memphis Grizzlies at TD Garden on December 30, 2020 in Boston, Massachusetts.  (Kathryn Riley/Getty Images/AFP)

Brown’s put-back basket with 4:39 left in the first half gave Boston a 57-30 lead and they cruised from there, Brown notching his career-high in scoring despite sitting out all of the fourth quarter.