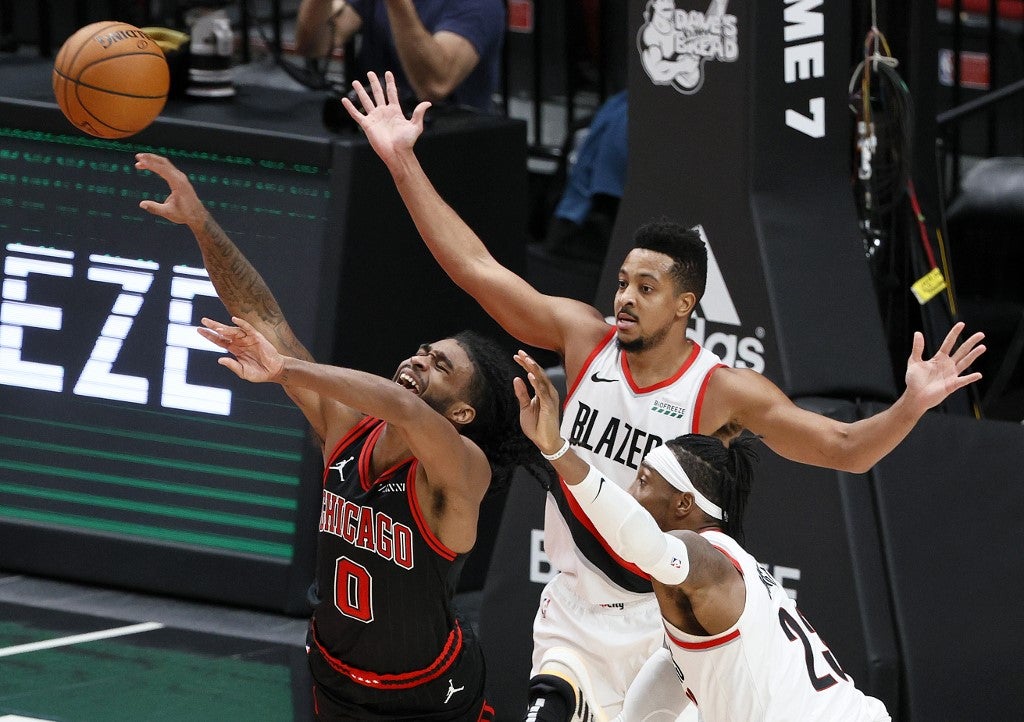 Coby White of the Chicago Bulls attempts to pass while pressured by Robert Covington  and CJ McCollum  of the Portland Trail Blazers in the fourth quarter at Moda Center on January 05, 2021 in Portland, Oregon.  Steph Chambers/Getty Images/AFP

Wendell Carter Jr. broke a late tie with two free throws, Otto Porter Jr. nailed a midrange jumper and White connected from just inside the arc in a six-point Bulls flurry that produced a 106-100 lead with 2:08 to play, and the visitors held on from there to record their first win over the Trail Blazers since Nov. 15, 2016.

Damian Lillard’s two free throws with 30.8 seconds to play kept the Trail Blazers in the game at 106-105, before Pacific Northwest product Zach LaVine capped a 18-point performance with a back-breaking 3-pointer with 10.8 seconds to go.

In their first home game after a 2-2 trip, the Trail Blazers had one more chance to tie, but Carmelo Anthony misfired on a 3-pointer with 2.7 seconds left.

Playing without Lauri Markkanen, Tomas Satoransky, Ryan Arcidiacono and Chandler Hutchison, all out for COVID reasons, the Bulls fell behind by 20 points in the first half and didn’t overtake the Trail Blazers until Garrett Temple nailed a 3-pointer for a 96-94 lead with 6:36 to play.

There were four more lead changes after that, with Carter’s foul shots at the 3:34 mark giving Chicago the lead for good.

Temple and Patrick Williams finished with 14 points apiece, Carter added 13 and Thaddeus Young had 10 for the Bulls, who won for the fourth time in their past five outings in the opener of a four-game Western swing.

Chicago’s big early hole was mostly the result of a 14-point Trail Blazers flurry over the final 2:58 of the first quarter that turned a four-point game into a 39-21 Portland advantage. Trent and Anthony contributed 3-pointers to the run.

The margin reached 20 on another Trent 3-pointer early in the second period before the Bulls began chipping away. They got within seven later in the second quarter, then as close as 85-81 with 25.9 seconds left in the third period after a 3-pointer by Temple.