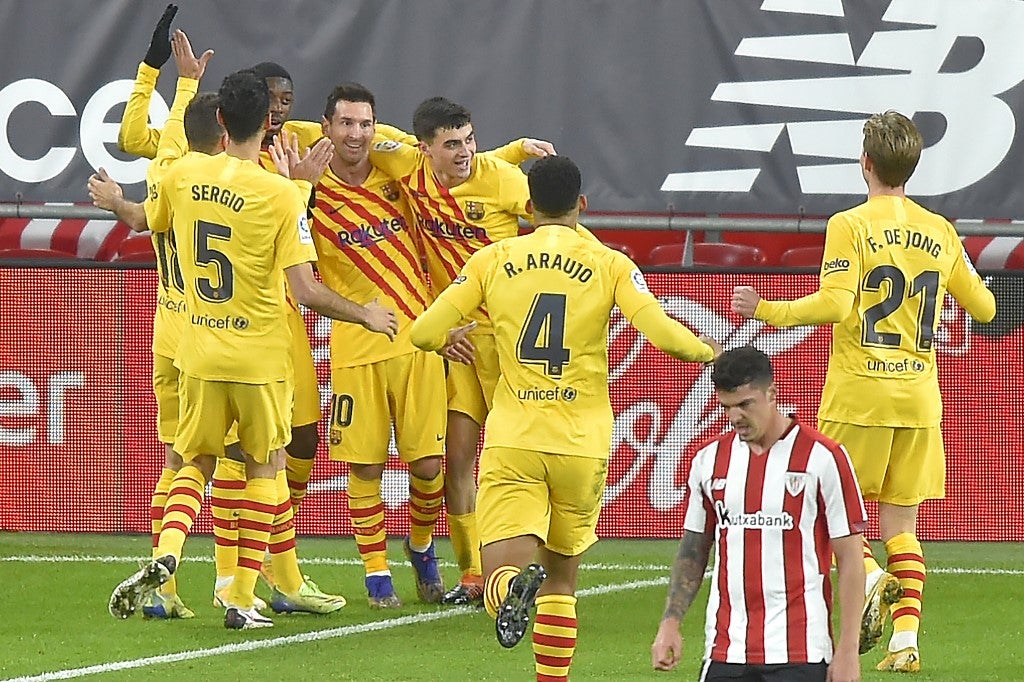 Barcelona’s Argentinian forward Lionel Messi (C) celebrates with teammates after scoring a goal during the Spanish League football match between Atheltic Bilbao and Barcelona at the San Mames Stadium in Bilbao on January 6, 2021. (Photo by ANDER GILLENEA / AFP)

BILBAO—Lionel Messi was at the top of his game as Barcelona earned a 3-2 win at Athletic Bilbao on Wednesday to move up to third in La Liga.

Athletic got off to a dream start in their first match under new coach Marcelino when forward Inaki Williams latched on to a low through ball and raced towards goal, beating one defender before firing low into the net in the third minute.

Barca quickly responded, however, with a sensational team goal, Messi delivering a superb pass to pick out Frenkie de Jong by the byline and the Dutchman volleyed the ball back across the area for 18-year-old Pedri to head home.

Messi and Pedri combined beautifully to put Barca ahead, the youngster receiving a pass from the Argentine before returning it with a delightful backheel and Messi rolled the ball into the bottom corner in the 38th minute.

Messi struck again in the 62nd minute to finish off another brilliant team move and missed a couple of chances to complete his hat-trick, although Iker Muniain made for a tense finale by scoring for Athletic in the 90th.

The win took Barca above Real Sociedad and into third in the standings on 31 points, seven behind leaders Atletico Madrid who have two games in hand on the Catalans.