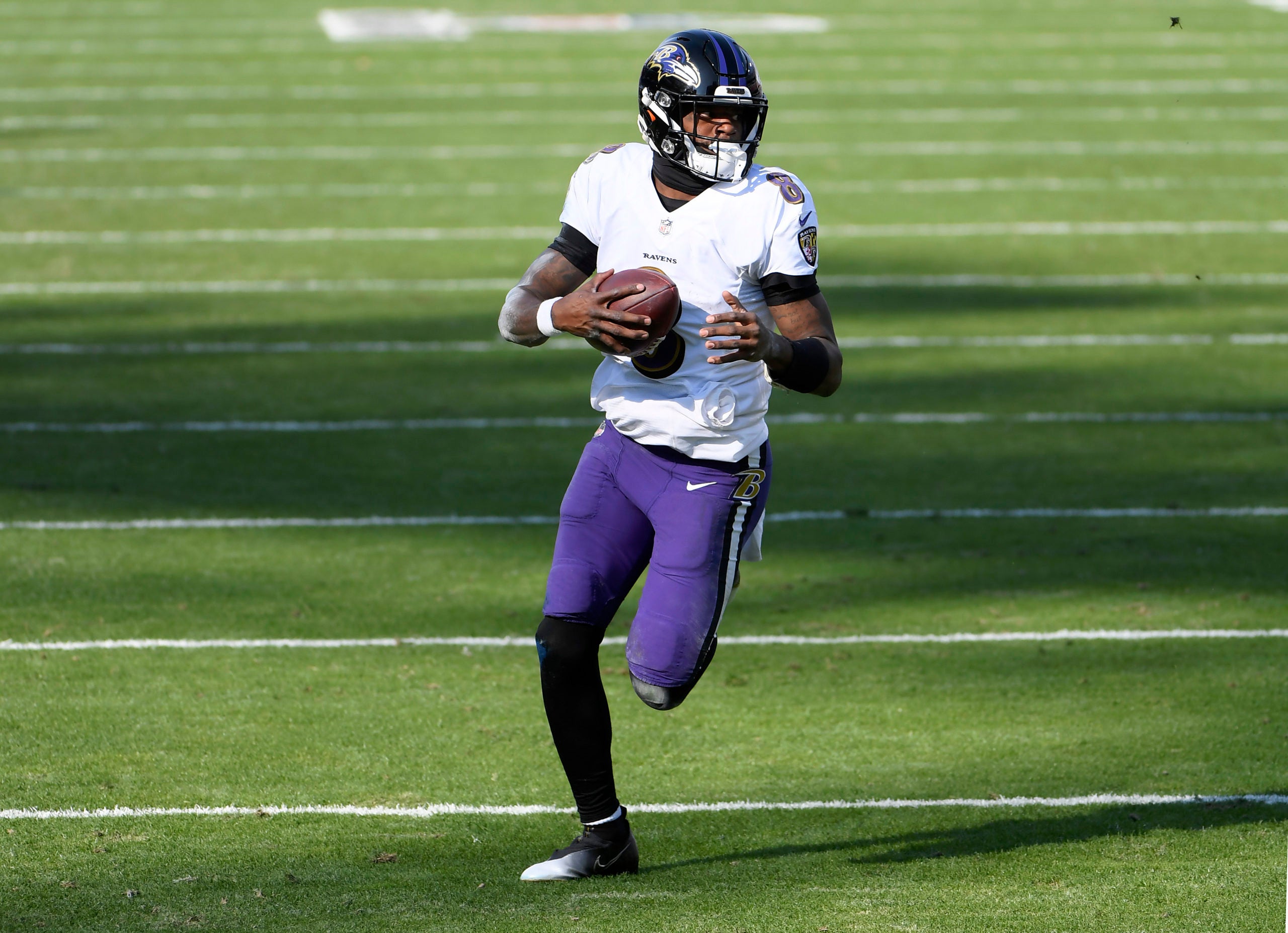 Baltimore Ravens quarterback Lamar Jackson (8) runs with the ball against the Tennessee Titans during the first half in a AFC Wild Card playoff game at Nissan Stadium. Mandatory Credit: Steve Roberts-USA TODAY Sports

Quarterback Lamar Jackson etched his name in the NFL record book while leading the Baltimore Ravens to a 20-13 win over the host Tennessee Titans in an AFC wild-card game on Sunday in Nashville, Tenn.

“It feels great,” Jackson told ESPN about his first playoff win in three attempts. “I’m happy we got it done.”

Jackson’s 48-yard touchdown run was the second-longest for a score by a quarterback in NFL postseason history. It trails only Colin Kaepernick’s 56-yard sprint in the San Francisco 49ers’ game against the Green Bay Packers in the NFC divisional round in 2013.

Jackson now holds two of the top three rushing performances by a quarterback in NFL playoff history. His 136 rushing yards on Sunday are third-most by a quarterback in a playoff game, behind Kaepernick’s 181 against the Packers in 2013 and Jackson’s 143 he posted in last year’s loss to the Titans in the divisional round. Kaepernick rushed for 130 yards for the 49ers against the Seattle Seahawks in the 2014 NFC Championship game.

However, Jackson and Kaepernick are the only quarterbacks to eclipse the 100-yard rushing mark and score at least a touchdown. Michael Vick, who amassed 119 yards rushing against the then-St. Louis Rams in the 2005 divisional round, and Donovan McNabb, who rushed for 107 yards in 2003 against the Packers in the divisional round, each rushed for at least 100 yards but didn’t run into the end zone.

Jackson completed 17 of 24 passes for 179 yards with an interception against the Titans.

“We finished. We finished,” Jackson told ESPN after the game. “We finally finished.”

Last week, Jackson became the first quarterback in NFL history to rush for at least 1,000 yards in multiple seasons while leading the Ravens to their third straight AFC playoff berth with a 38-3 win over the host Cincinnati Bengals. The victory enabled Jackson to become the fastest quarterback in league history to win 30 games, doing so in his 37th start.

Jackson rushed for 1,005 yards and seven touchdowns during the regular season.

Jackson rushed for an NFL quarterback-record 1,206 last year in his first full year as a starter, en route to becoming the youngest quarterback to be named NFL MVP.