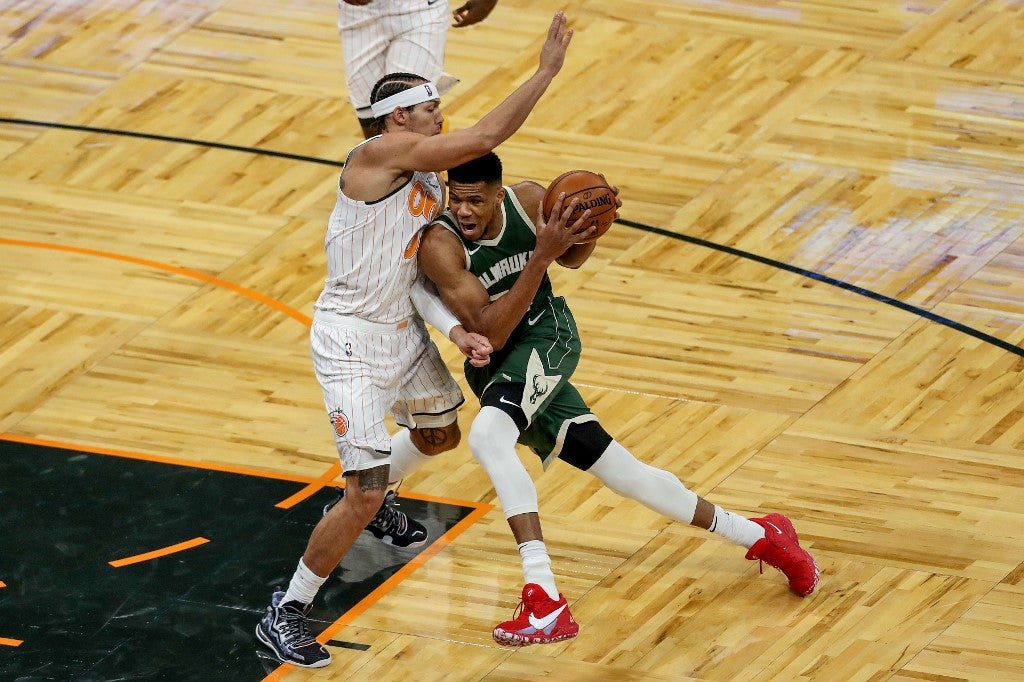 Giannis Antetokounmpo #34 of the Milwaukee Bucks drives to the net as Aaron Gordon #00 of the Orlando Magic defends at Amway Center on January 11, 2021 in Orlando, Florida. Alex Menendez/Getty Images/AFP

Giannis Antetokounmpo scored 13 of his 22 points in the second half to lift the visiting Milwaukee Bucks to a 121-99 victory over the Orlando Magic on Monday.

Antetokounmpo show no ill effects of the back spasms that prevented him from playing in Milwaukee’s 100-90 win over Cleveland on Saturday. The reigning, two-time NBA Most Valuable Player ignited scoring surges in the second half and danced around foul trouble for the Bucks, who outscored the Magic by a 35-17 margin in the fourth quarter.

Khris Middleton collected 20 points and 10 rebounds and Bobby Portis finished with 20 points off the bench to send Milwaukee to its fifth win in six games. Middleton made 9 of 17 shots and Portis went 9 of 13 for the Bucks, who shot 50.5 percent (46 of 91) from the floor.

Orlando’s Nikola Vucevic recorded 28 points and 13 rebounds for his third straight double-double and eighth of the season.

Aaron Gordon had 21 points and eight assists for the Magic, who have dropped three in a row and five of seven since starting the season with a franchise-best 4-0 record.

The teams were meeting for the first time since Milwaukee defeated Orlando in five games during their Eastern Conference opening-round series.

Antetokounmpo opened the scoring in the third quarter and later added a finger-roll layup and a 3-pointer on back-to-back possessions to push the Bucks’ lead to 73-62.

Cole Anthony answered by scoring by scoring seven of his team’s next 10 points and Gordon sank a 3-pointer to trim Milwaukee’s lead to 80-78.

Undaunted, Antetokounmpo began the fourth with a reverse layup before he joined Portis in draining a 3-pointer to push the Bucks’ advantage to 94-86. Brook Lopez converted a three-point play and Pat Connaughton, Middleton and Bryn Forbes each sank a 3-pointer as the lead ballooned to 110-88 with 5:54 to play.

The Bucks’ bench scored the final seven points of the first quarter and Jrue Holiday strung together seven straight points to ignite a late surge to help Milwaukee secure a 63-54 lead at halftime.