Kyrie Irving #11 of the Brooklyn Nets loses control of the ball as he is fouled by Reggie Jackson #1 of the LA Clippers during the second half at Barclays Center on February 02, 2021 in the Brooklyn borough of New York City. Sarah Stier/Getty Images/AFP

Kyrie Irving rattled in 39 points and James Harden bagged the 50th regular season triple double of his career as the Brooklyn Nets outgunned the Los Angeles Clippers 124-120 on Tuesday.

The potential NBA finals sneak preview at the Barclays Center saw the Nets’ big three of Irving, Harden and Kevin Durant combine for a total of 90 points to halt the Clippers’ three-game unbeaten streak.

Retweet highlights from @KyrieIrving's 39-point night to vote him for #NBAAllStar pic.twitter.com/LfdwUiWL9o

Kawhi Leonard led the Clippers scoring with 33 points while Paul George added 26 and French international Nicolas Batum chipping in with 21.

Irving said the Nets had been determined to lay down a marker against the Clippers, who led the Western Conference with the league’s best record heading into the game.

“We knew they were going to come out aggressive and they’ve got two wonderful players (Leonard and George) and a great collection of guys,” Irving said. 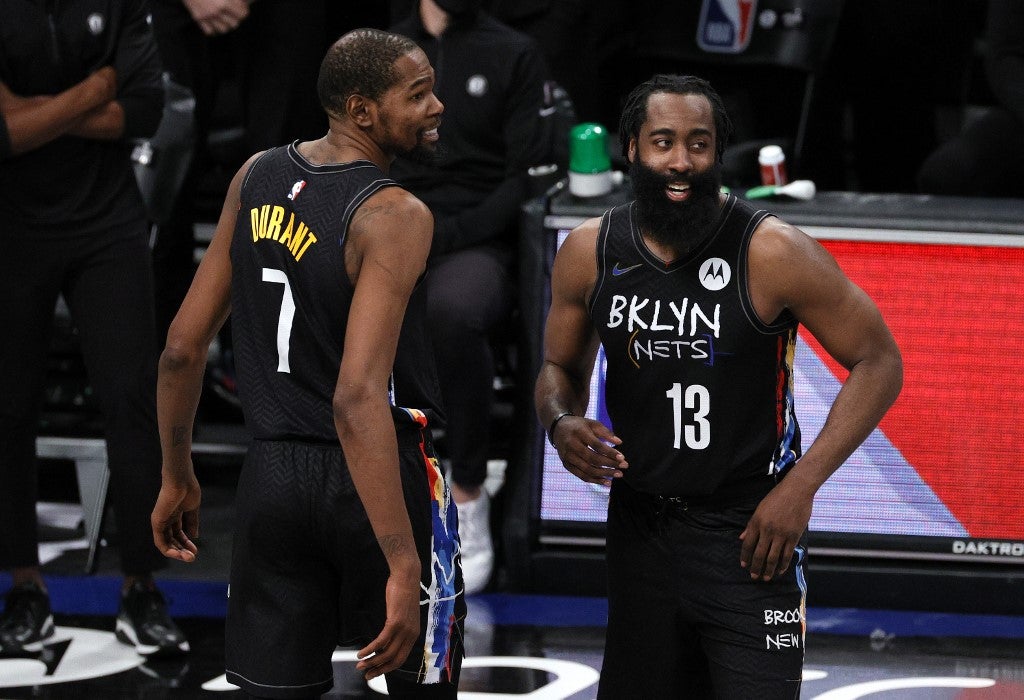 Kevin Durant #7 and James Harden #13 of the Brooklyn Nets react during the second half against the LA Clippers at Barclays Center on February 02, 2021 in the Brooklyn borough of New York City. Sarah Stier/Getty Images/AFP

“We know they’re in contention for meeting us down the line so we wanted to come out and make an impression. I felt like we did that. It was a total team effort and that’s what it’s going to take every single night.”

That's 2nd all-time for anyone on a new team in NBA history.#NBAALLSTAR WORTHY pic.twitter.com/ua0w4Yovp5

The Nets, who had blown a 10-point fourth-quarter lead in a late collapse to the Washington Wizards on Sunday, were given a scare late in the game when a 118-108 advantage shrank to a single point with five seconds remaining.

But a length-of-the court pass from Harden to Jeff Green set up a lay-up that made it 122-119, and the Nets eventually made the game safe with two closing free throws from Irving with 1.9 seconds on the clock.

“We’ve got to get our defense in order, last few games we’ve been giving up a lot of points,” Irving said after his season-high points tally.

“So we’ve got to knuckle down on the defensive end and continue to will ourselves to win.”

Harden finished with 23 points, 14 assists and 11 rebounds to bring up his half-century of triple-doubles. Durant had 28 points with nine rebounds during his 38 minutes on court.