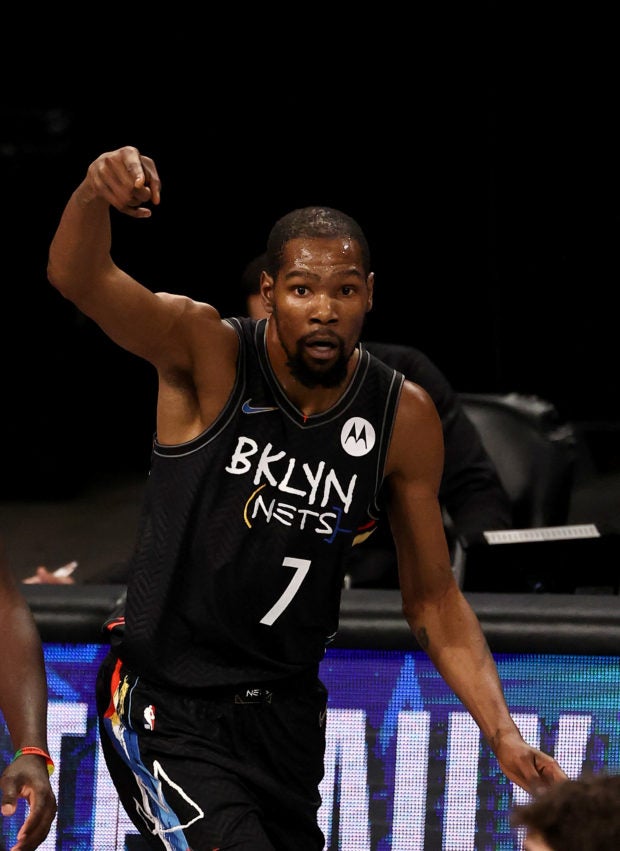 Kevin Durant #7 of the Brooklyn Nets celebrates his three point shot in the second quarter against the Toronto Raptors at Barclays Center on February 05, 2021 in New York City.  (Elsa/Getty Images/AFP)

LOs ANGELES – Kevin Durant, who was forced to come off the bench for the first time in his NBA career on Friday, was pulled from the Brooklyn Nets contest in the third quarter all because of Covid-19 contact tracing.

The strange turn of events started with Durant being ruled out of the starting lineup for the Nets 123-117 loss to the Toronto Raptors because someone he came in contact with earlier Friday had an inconclusive test for Covid-19.

Durant then checked into the game halfway through the first quarter and remained until being removed with nine minutes left in the third quarter of a tight contest by a Nets official. A visibly frustrated Durant threw his water bottle as he headed down the tunnel to the Brooklyn dressing room.

“Out of an abundance of caution, Durant was removed from the game and contact tracing is underway to determine if he was in fact a close contact of the positive individual,” a league spokesman said in a statement.

While the game was still going on Durant took to his cell phone in the bowels of Barclays Center arena and tweeted “Free me”.

The league said Durant had tested negative three times in the last 24 hours, including twice on Friday. But because Durant had been in contact with someone who originally had an inconclusive test result he was held out of the start of the game.

Durant then entered the game and played 19 minutes before the league learned the other individual had tested positive for the virus.

“Someone he interacted with this afternoon subsequently had an inconclusive test result return shortly before the game,” the spokesman said. “Under the league’s health and safety protocols, we do not require a player to be quarantined until a close contact has confirmed a positive test.

“During the game a positive test result was returned for the person.”

The drama took place while officials were reviewing a play that could have seen Durant slapped with his fifth foul in just 19 minutes of playing time. But Durant won the video review and the foul call was overturned.

Durant was sitting on the bench waiting for the officials to review the play when he was pulled from the game for good.

Nets coach Steve Nash said losing Durant was just another twist in a bizarre back and forth season.

“It is tough to lose Durant twice in one night,” said the Canadian. “But we got to be adaptable. It is the kind of season it is going to be.”

Durant finished with eight points and is not expected to travel with the team for their next game in Philadelphia on Saturday.