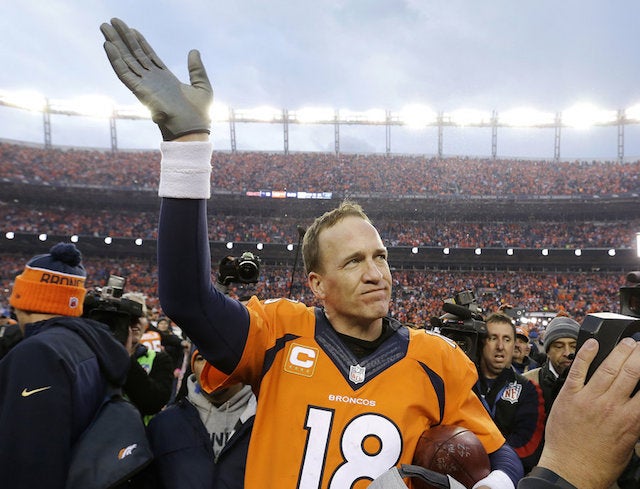 FILE – In this Jan. 24, 2016, file photo, Denver Broncos quarterback Peyton Manning waves to spectators following the AFC Championship game between the Denver Broncos and the New England Patriots, in Denver. A person with knowledge of the decision tells The Associated Press on Sunday, March 6, that Manning has informed the Denver Broncos he’s going to retire. AP

The trio were among eight 2021 inductees named on Saturday in the television broadcast celebrating the NFL’s 2020 award winners.

The show was part of the festivities surrounding Sunday’s Super Bowl, which pits Tom Brady and the Tampa Bay Buccaneers against Patrick Mahomes and his reigning Super Bowl champion Kansas City Chiefs in Tampa, Florida.

Manning was the first, and as of Saturday night, the only starting quarterback to lead two different teams to Super Bowl titles.

Brady, who won six with the New England Patriots, will be trying to match that feat on Sunday.

Manning, 44, guided the Indianapolis Colts to the 2007 Super Bowl crown and led the Denver Broncos to the 2016 Super Bowl title in the final game of his 18-year NFL career.

Manning threw for 71,940 career yards and 539 touchdowns, rewriting the league record books with such efforts as 55 touchdown passes in a season and 5,477 passing yards in a season.

Woodson helped Green Bay win the 2011 Super Bowl but spent most of his 18-year career with the Oakland Raiders. He made 65 career interceptions and matched an NFL record with 13 defensive touchdowns.

Former Dallas Cowboys wide receiver Drew Pearson was elected as a senior inductee, former Steelers personnel executive Bill Nunn will be posthumously enshrined as a contributor and former Raiders and Seahawks coach Tom Flores will be enshrined in a ceremony in August in Canton, Ohio.

For Pearson, 70, it was a long wait for the Hall of Fame call.

He played 11 seasons with the Cowboys and won one Super Bowl with the team, finishing his career with 489 receptions for 7,822 yards and 48 touchdowns.