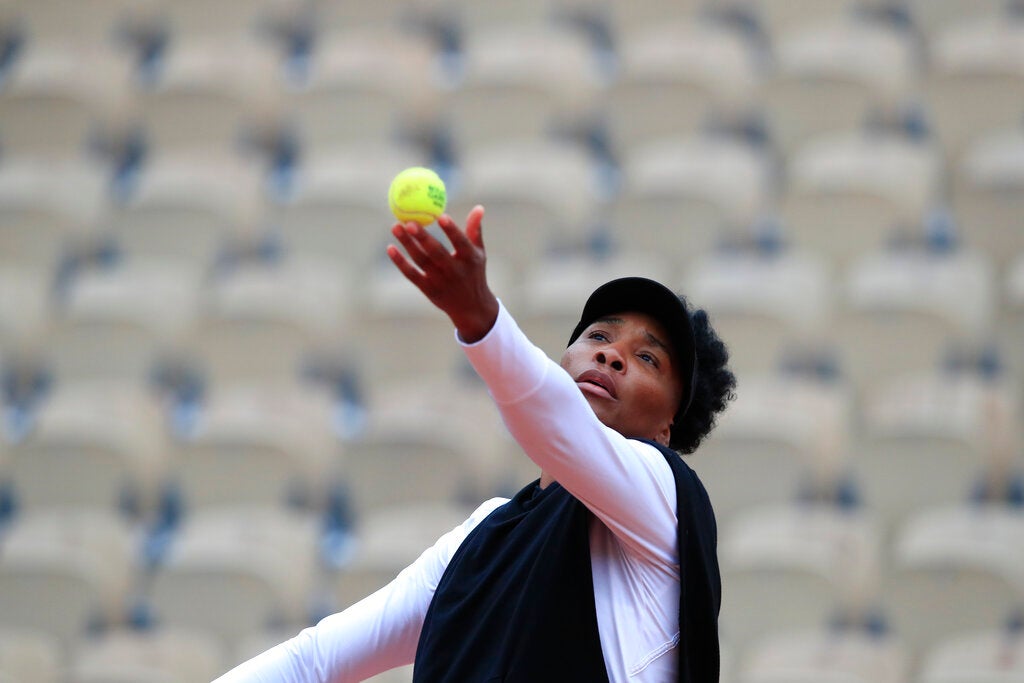 FILE – Empty seats are seen in the background as Venus Williams of the U.S. serves against Slovakia’s Anna Karolina Schmiedlova in the first round match of the French Open tennis tournament at the Roland Garros stadium in Paris, France, Sunday, Sept. 27, 2020. (AP Photo/Michel Euler)

Naomi Osaka said Venus Williams had an “aura” and Serena hailed her ageless sister as “such an inspiration” after the 40-year-old powered into the Australian Open second round Monday.

Williams, who played her first Australian Open in 1998, battled past fellow veteran Kirsten Flipkens 7-5, 6-2 on Margaret Court Arena in her 88th Grand Slam to ensure she lived to fight another day.

World number three Osaka, who also comfortably won, said the seven-time Grand Slam winner had long been a hero and she was amazed at her longevity.

“Ironically I actually interact with Venus more (than Serena),” she said after sweeping past Russia’s Anastasia Pavlyuchenkova 6-1, 6-2.

“For me, I feel like I do talk about Serena a lot, but Venus is sort of the reason why Serena is where she is.”

“Of course, I always love to pay homage to her,” she added. I feel like whenever I see her, it’s really amazing just to watch how much she loves tennis.

“I see her smiling so much nowadays, so it’s really nice to see. She just has this aura of loving the sport and this infectious energy. I hope that I can learn a lot from her.”

Asked why she still had so much passion for playing tennis, Venus replied: “I like my job. This is Job A.

“I think that no matter what happens to you in life, you always hold your head up high, you give a hundred million percent,” she added.

“That’s what I do every single day. That’s something that I can be proud of.”

Sister Serena, who crushed Germany’s Laura Siegemund 6-1, 6-1 in the first round at Melbourne Park as she aims for a record-equalling 24th Grand Slam title, has spent the past few weeks with Venus as her hitting partner.

“She’s such an inspiration because she never gets frustrated about her situation, health-wise. She’s always looking on the bright side. Then she works so hard. Yeah, she’s been great,” she said.

Williams was diagnosed with Sjogren’s disease in 2011, a condition that leaves her weakened. She took up a vegan diet to stay competitive and combat the illness.

“It’s also very inspiring because she still pushes me on a level that no one’s able to push me, so it was incredibly helpful.”