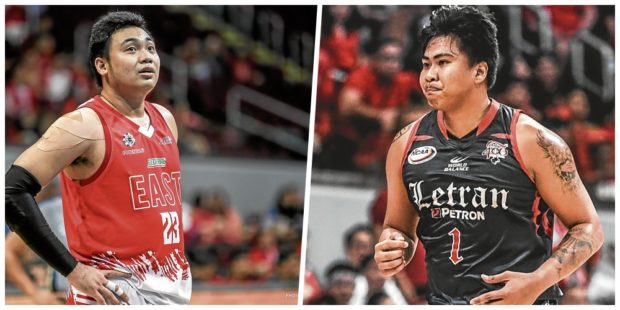 Knowing they’re about to enter the grown men’s league, both Alvin Pasaol and Larry Muyang are working extra hard to improve the defensive facets of their game.

“I believe that’s what’s really needed when you move to the pros. We all know everybody there can score,” Pasaol said on a recent episode of The Prospects Pod.

“I play as center. So I’m really hoping to double down on my defense,” added Muyang.

The pair, which both had noteworthy careers at the collegiate level, are projected to be first-round picks in the PBA Rookie Draft on March 14.

A 6-foot-4 swingman, Pasaol could instantly provide scoring to any club that drafts him. He once set the University Athletic Association of the Philippines’ single-game scoring record with 49 points before moving to the 3×3 circuit where he blossomed into the country’s second-best player.

Meanwhile, Muyang should easily draw any team’s interest. The 6-foot-5 bruiser was once the National Collegiate Association’s Rookie of the Year. He then became Letran’s anchor, especially during the Knight’s championship run in 2019.

Both players are likely to be selected in the first round of the draft as their heft and size are rarities among rookies.

They could even be picked early should the number of Filipino-foreign hopefuls are reduced after March 5, the league’s deadline for documentary requirements.

But such a possibility does not excite Muyang and Pasaol that much. They are, after all, firm believers that nothing will be handed to them on a silver platter once they make the jump to the PBA.

If anything, what thrills them the most is the idea of simply going up against the PBA’s finest.

“June Mar (Fajardo) and Japeth (Aguilar). They’re big people. I also want to experience going up against huge players,” Muyang said. “I know they’ll make quick work of me, but I’ll try to put up a good fight.”

“These PBA stars are who the people look up to. Just playing against them is already an honor,” added Pasaol.

Hopefuls have been invited by teams for private workouts to make up for the absence of the Draft Combine. INQ