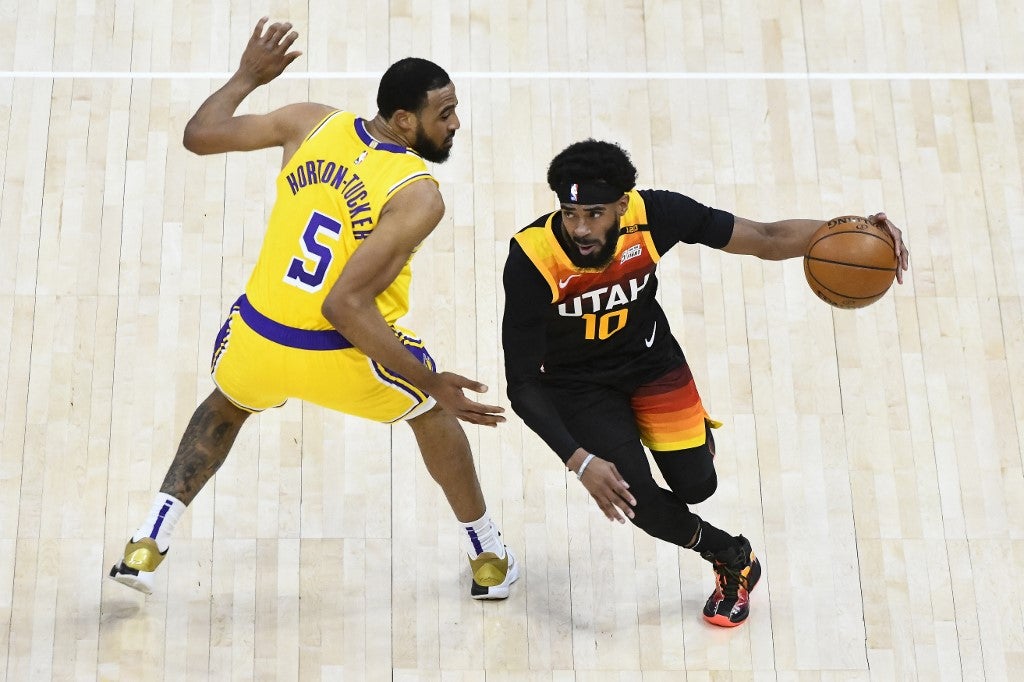 Mike Conley #10 of the Utah Jazz drives past Talen Horton-Tucker #5 of the Los Angeles Lakers during a game at Vivint Smart Home Arena on February 24, 2021 in Salt Lake City, Utah. Alex Goodlett/Getty Images/AFP

Donovan Mitchell and Mike Conley each flirted with triple-doubles and Jordan Clarkson scored 18 points in his customary role off the bench as the red-hot Utah Jazz smashed the Los Angeles Lakers 114-89 Wednesday night in Salt Lake City.

Rudy Gobert, also named to his second All-Star team, added 18 points with nine rebounds as the Jazz to their 22nd win in 24 games. It also the 20th time in the spurt that they have won by double digits.

Bojan Bogdanovic added 15 points — all on 3-pointers for Utah, which has the best record in franchise history to begin a season (26-6) and the NBA’s best mark so far.

LeBron James scored 19 points but didn’t have much help in the Lakers’ most lopsided loss of the season. Los Angeles, playing without Anthony Davis and Dennis Schroder, lost their fourth straight and fell for the fifth time in six games.

The game was competitive in the first quarter, but the Jazz blew it open in the second quarter by outscoring the Lakers 39-24. Utah put it away with a 27-17 third-quarter advantage, holding Los Angeles to its lowest point total in a quarter this season.

The Lakers are hoping to get Schroder back for Friday’s home game against Portland. He has been sidelined for four games due to NBA health and safety protocols.

Only two other players scored in double figures for the Lakers: Montrezl Harrell (16 points) and Markieff Morris (12).

Utah made 22 3-pointers after draining a franchise-record 28 in beating Charlotte on Monday.