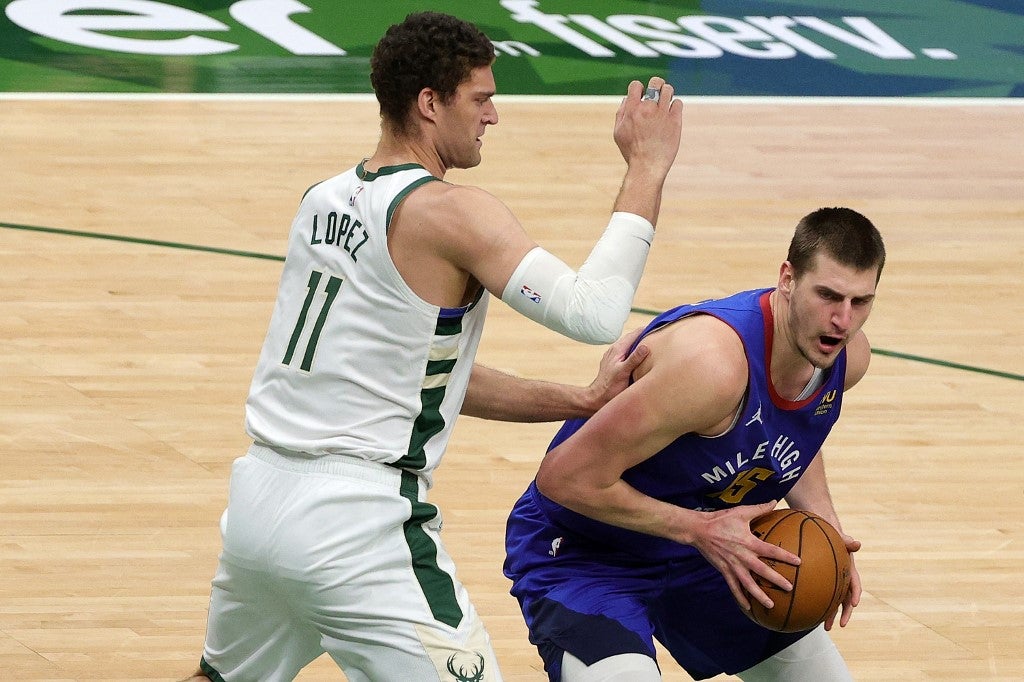 Nikola Jokic #15 of the Denver Nuggets is defended by Brook Lopez #11 of the Milwaukee Bucks during the first half of a game at Fiserv Forum on March 02, 2021 in Milwaukee, Wisconsin. Stacy Revere/Getty Images/AFP (Photo by Stacy Revere / GETTY IMAGES NORTH AMERICA / Getty Images via AFP)

Nikola Jokic recorded his 50th career triple-double with 37 points, 11 assists and 10 rebounds to help the Denver Nuggets cool off the Milwaukee Bucks 128-97 on Tuesday night.

For Jokic, it was his ninth triple-double of the season and it came one night after he finished with 39 points, 14 rebounds and nine assists in a win against the Bulls. Denver secured its third win in a row to open a five-game road trip.

Records his 50th triple-double on the second night of a back-to-back.

The Nuggets improved to 41-9 when Jokic finishes with a triple-double and were very effective on offense, shooting 55.8 percent (53-for-95) as they snapped the Bucks’ five-game winning streak despite Giannis Antetokounmpo’s 27 points, eight rebounds and three assists.

Antetokounmpo also had his streak of four consecutive games scoring 35 or more points halted by a strong effort from the Nuggets’ frontcourt.

Jokic had 13 points and nine assists in the first half and teammate Jamal Murray scored 18 of his 24 points before halftime. Denver led by as many as 21 points in the second quarter but settled for a 64-50 edge at the break.

The Nuggets scored 99 points through three quarters, shooting 55.4 percent (41 of 74) over that span.

The Nuggets’ zone defense contributed to Milwaukee shooting only 27.5 percent from 3-point range (11-for-40) for the game. Denver also dominated in the paint, outscoring Milwaukee 56-32, while also posting a 20-7 edge in second-chance points.

Will Barton and Michael Porter Jr. contributed to that effort at both ends. Barton finished with 14 points, eight rebounds and five assists while Porter Jr. totaled 11 points and seven rebounds.

Khris Middleton finished with 20 points and six assists for the Bucks, and Brook Lopez added 12 points and five rebounds.

Milwaukee guard Jrue Holiday, who played his second game since returning from a 10-game absence due to health and safety protocols, was still not in his typical form. Holiday finished with four points on 2-of-6 shooting and had three assists in 18 minutes off the bench.