No Luka Doncic, but Mavs survive to beat Thunder 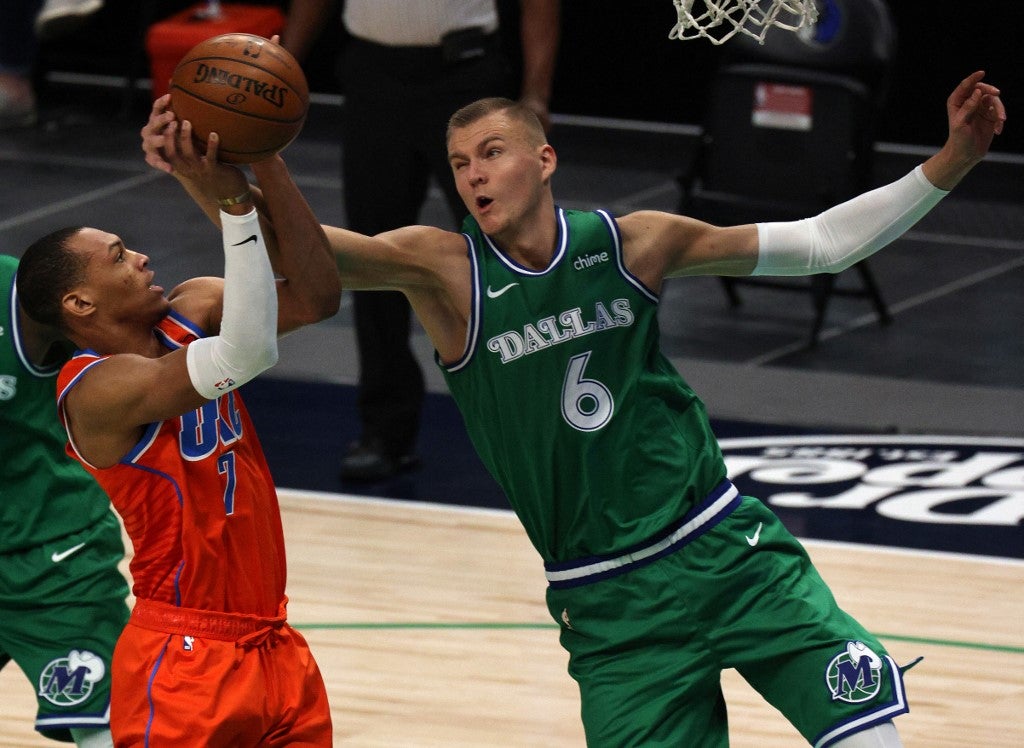 FILE — Darius Bazley #7 of the Oklahoma City Thunder takes a shot against Kristaps Porzingis #6 of the Dallas Mavericks in the first quarter at American Airlines Center on March 03, 2021 in Dallas, Texas. Ronald Martinez/Getty Images/AFP

Kristaps Porzingis and Tim Hardaway Jr. scored 19 points each to lead the host Dallas Mavericks to an 87-78 win over the Oklahoma City Thunder on Wednesday.

It was the lowest-scoring game of the season for both teams.

The Mavericks head to the All-Star break with straight wins in consecutive games and nine in their last 11 games.

The Thunder, who still have a game remaining before the break, Thursday at San Antonio, have lost two consecutive games and nine of their last 13.

Dallas won Wednesday without star guard Luka Doncic, who missed the game with lower back tightness. Dallas coach Rick Carlisle said before the game that Doncic has been dealing with the soreness for more than two weeks.

The Mavericks were cold as ice from behind the 3-point line for the first 2 1/2 quarters, missing their first eight from behind the arc and going 1 of 22 there before finally getting going midway through the third.

Then Dallas got hot from beyond the arc, hitting four during an 18-2 run to take control.

Without Doncic, Porzingis came up big, going 7 of 15 from the floor, hitting three 3-pointers and recording 13 rebounds.

Josh Richardson added 16 points for Dallas while Jalen Brunson, starting for Doncic, had 11.

Oklahoma City hung with the Mavericks early, thanks in part to four 3-pointers in the first quarter and Dallas’ struggles from beyond the arc.

The Thunder shot a season-low 33.3 percent from the floor and were just 9 of 39 from beyond the arc.

Shai Gilgeous-Alexander led Oklahoma City with 15 points, going just 5 of 15 from beyond the arc. Darius Bazley had 11 points and 10 rebounds.

Luguentz Dort and Bazley were a combined 4 of 20 from the floor.

The Thunder had just 13 assists, a season low, and snapped a string of 14 consecutive games with 20 or more assists.