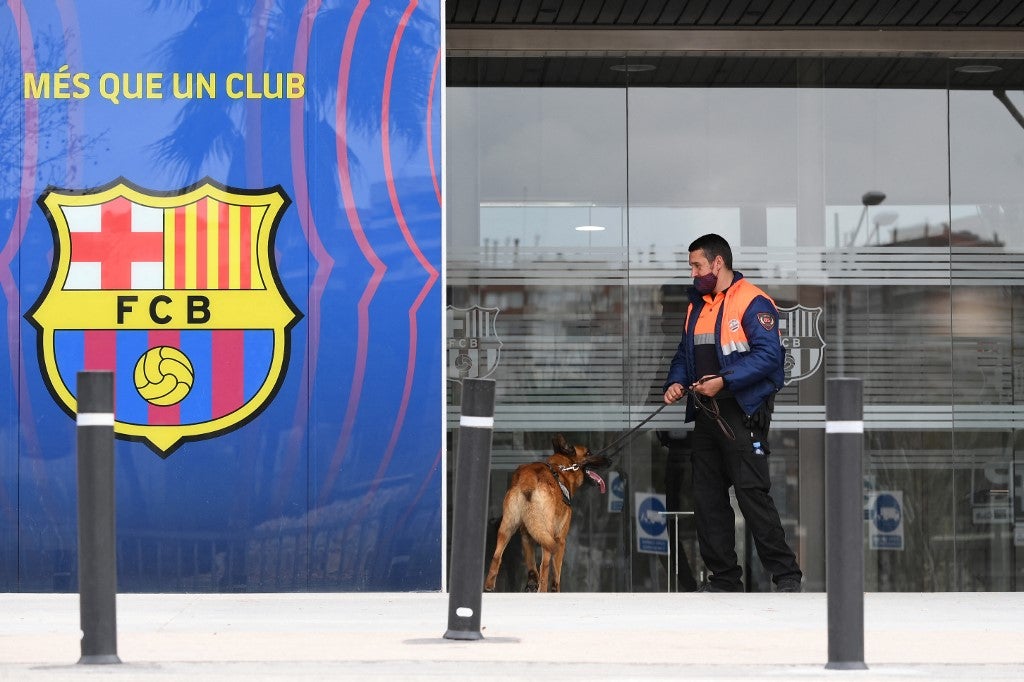 A security guard enters the offices of Barcelona Football Club with a dog on March 01, 2021 in Barcelona during a police operation inside the building. – Police raided the offices of FC Barcelona on March 01, 2021, carrying out several arrests just six days ahead of the club’s presidential elections, a Catalan regional police spokesman told AFP. Spain’s Cadena Ser radio said one of those arrested was former club president Josep Maria Bartomeu, who resigned in October, along with CEO Oscar Grau and the club’s head of legal services. (Photo by LLUIS GENE / AFP)

Polling opened on Sunday morning for a presidential election at crisis-hit Barcelona, where the winner will face the challenge of rebuilding the club’s finances and squad.

Voting started at 09:00 local time (0800 GMT) in an election reshaped by the coronavirus pandemic.

The three candidates are former president Joan Laporta, the favorite according to the Catalan press, Toni Freixa and Victor Font.

They are running to replace Josep Maria Bartomeu, who resigned in October and was briefly taken in for questioning following police raids on the club on Monday into the ‘Barcagate’ scandal which revolves around allegations that Barcelona carried out a defamation campaign against current and former players critical of club leadership.

“These are the most important elections in the history of Barca,” Laporta told the club website after voting.

Barcelona is in crisis on and off the field.

Star player Lionel Messi is out of contract in the summer. In the Champions League, Barcelona travels to Paris on Wednesday trailing Paris Saint-Germain 4-1 after a humiliating first-leg home loss.

Form in La Liga has improved and on Saturday Barcelona climbed to second, two points behind leaders Atletico Madrid, who have two games in hand.

In previous elections, members have cast their votes in person at the club’s Nou Camp headquarters, but because of Covid-19 members have also been allowed to apply for postal votes.

Polling stations have also been set up in Girona, Tarragona, Tortosa and Lleida in Catalonia and in Andorra but the club said that 78,987 members had indicated they would vote, as they always have, at the Camp Nou.

Even though it began to rain in Barcelona shortly after the polls opened, the club reported on their website at 09.45 that “the large influx of members to the stadium continues.” The club posted a photo of queueing supporters wearing masks and rubbing gel on their hands.

“Members should have no doubt about coming to vote,” said Carles Tusquets, head of the interim management committee that has run the club since Bartomeu resigned on October 27.

The polling will continue until 21.00 local time and the result is expected before midnight.