'What a journey it's been': Pacquiao posts old boxing license | Inquirer Sports

‘What a journey it’s been’: Pacquiao posts old boxing license 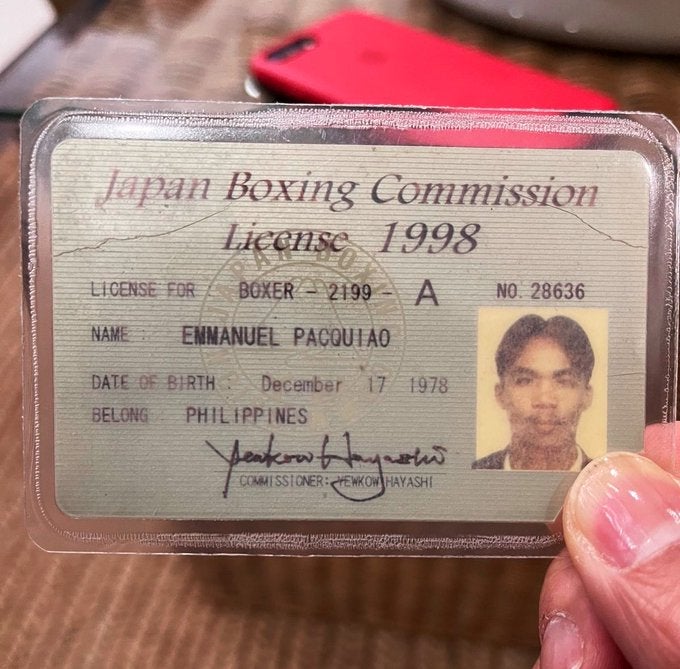 MANILA, Philippines — Manny Pacquiao went all the way back in his latest post on social media Tuesday.

Nostalgia hit Pacquiao, who shared a piece of his boxing career—his Japanese boxing license from over two decades ago.

“My boxing license from 1998. What a journey it’s been. Never thought I’d be able to accomplish everything God has allowed me to accomplish in and out of the ring. I thank God every day for giving me the strength to make it this far,” he wrote.

The boxing license was for his fight against Shin Terao in Tokyo, a bout that didn’t last long as Pacquiao stopped the hometown bet in the first round.

My boxing license from 1998. What a journey it’s been. Never thought I’d be able accomplish everything God has allowed me to accomplish in and out of the ring. I thank God every day for giving me the strength to make it this far. pic.twitter.com/3qaKMiV4W0

Seven months later, Pacquiao then traveled to Thailand where he knocked out Chatchai Sasakul in the eighth round for the WBC flyweight belt which was his first world title.

The bout against Terao was Pacquiao’s only fight in Japan to date as he went on to take his act to the United States, making a rousing US debut in 2001 with a stunning upset of South African champion Lehlo Ledwaba for the IBF super bantamweight crown.

The rest is history with Pacquiao conquering one weight class after another to become the sport’s only eight-division champion.