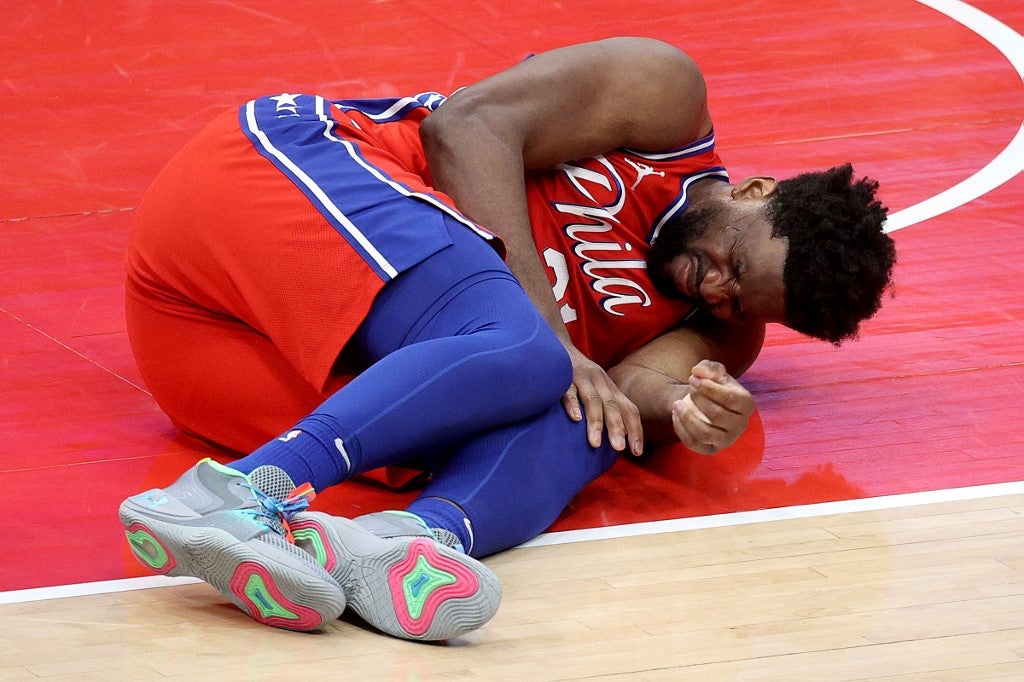 Joel Embiid #21 of the Philadelphia 76ers reacts after getting injured in the second half against the Washington Wizards at Capital One Arena on March 12, 2021 in Washington, DC. Carr/Getty Images/AFP (Photo by Rob Carr / GETTY IMAGES NORTH AMERICA / Getty Images via AFP)

Joel Embiid had 23 points and seven rebounds before leaving with a hyperextended left knee in the third quarter and the visiting Philadelphia 76ers breezed past the Washington Wizards 127-101 on Friday.

After throwing down a dunk, Embiid landed awkwardly on his left knee and remained on the floor for several minutes. A number of players surrounded Embiid with team trainer Kevin Johnson tending to him.

The Athletic reported that Embiid eventually limped to the locker room under his own power. He did not return to the game.

Shake Milton and Furkan Korkmaz contributed 18 points apiece off the bench while Tobias Harris added 14 points and eight rebounds. Seth Curry also had 14 points and Danny Green had 12 for the Sixers, who recorded their third consecutive road victory.

The Sixers won at Washington in the regular season for the first time since November 2013.

Russell Westbrook led the Wizards with 25 points, eight assists and five rebounds while Bradley Beal added 19 points despite being questionable before the game with left knee soreness. Robin Lopez had 10.

The Sixers jumped out to an early 19-point lead, but Washington quickly rallied within 48-40 when Garrison Mathews hit a 3-pointer midway through the second quarter.

Philadelphia led 63-53 at halftime thanks in large part to Embiid’s 19 points.

Westbrook and Beal had 13 apiece to keep the Wizards relatively close within 10.

The Sixers dominated the third and led 94-76 at the end of the quarter.

Milton opened the fourth with a 3-pointer, Korkmaz added a jumper and the advantage ballooned to 23 for the Sixers.

With Beal relatively ineffective with his sore knee, the Wizards struggled to locate their offensive rhythm. Westbrook converted a three-point play with 9:01 left, but they still trailed 103-83.

The Sixers controlled the tempo the rest of the way in the blowout victory.