Marathon of events for sprinter Knott in chasing Tokyo berth 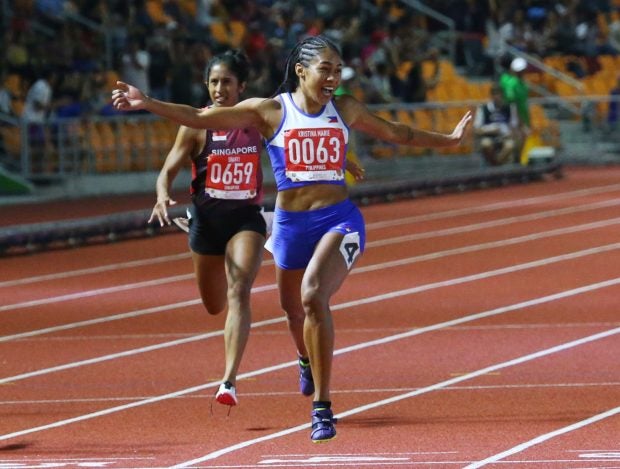 Sprinter Kristina Knott (KK) is readying for a final push in a bid to grab that cherished ticket to the Tokyo Olympics.

Starting next week, the Southeast Asian (SEA) Games women’s 200m record-holder will begin chasing her Olympic dream in the first of five races where she aims to meet the Olympic standard before hoping to get an invite to the elite Diamond League later on.

First on the United States-based Knott’s itinerary will be the Texas Relays in Austin on March 27, where she will run in the 100m before heading to Florida for a couple of races in the Pure Athletics in Clairemont on April 3 and the Miramar Invitational on April 10.

At Pure Athletics, she has been entered in the 200m while her coach Rohsaan Griffin will decide if Knott should run in the 100m, too.

A high-level race for 100m and 200m in Gainesville, University of Florida has been added to the schedule on April 17 before Knott packs her things for the 10th Savona International Meeting in Savona, Italy on May 13, where she can choose between the 100 and 200 depending which one she needs.

“I’ve been preparing for these for a long time. I’m healthy and in great condition for the coming races,’’ said the 25-year-old Knott, who broke the 33-year Philippine national record for women’s 100m set by Lydia de Vega-Mercado at the 1987 SEA Games.

According to an advisory from the Philippine Athletics Track and Field Association, should Knott qualify in the Clairemont meet for the 200m, she might still need to race again in the same event in Savona for a chance to be invited to the Diamond League in Rome on June 4.Strength and conditioning coach Carlo Buzzichelli has been overseeing Knott’s power amplification training in Orlando, Florida, while Griffin, her athletics skills/technique coach, will take over in the Miramar Invitational just in time before Team KK travels to Italy. INQ