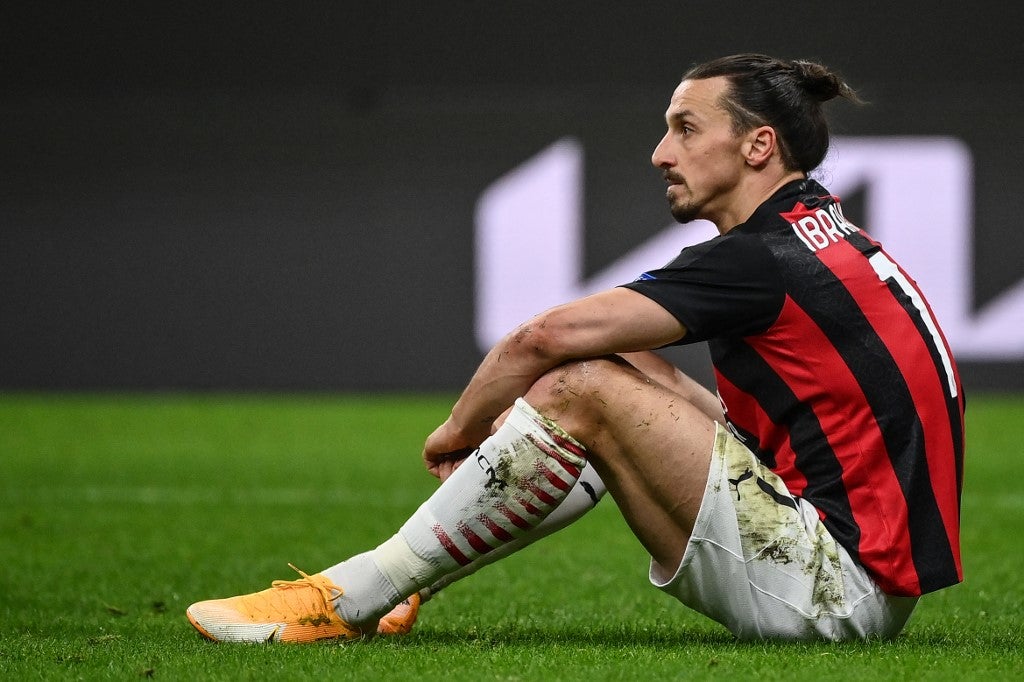 AC Milan’s Swedish forward Zlatan Ibrahimovic reacts at the end of the UEFA Europa League round of 16 second leg football match between AC Milan and Manchester United at San Siro stadium in Milan on March 18, 2021. (Photo by Marco BERTORELLO / AFP)

Zlatan Ibrahimovic’s AC Milan return to their decade-long Serie A title quest on Sunday desperate to close the gap on leaders Inter after their Europa League exit to Manchester United.

“I want to play to win something,” said Ibrahimovic, who returned after an injury layoff in Thursday’s 1-0 defeat in the last-16 second leg against his former club.

“There are still a few games to win and at the moment we are second, we have to continue the race to win the championship.

“Then if we reach the Champions League, it’s nice, but the goal is to win a trophy.

“We have a winning mentality and no one accepts losing, and that’s something I brought.

“To continue, to come back stronger and learn from mistakes. This is part of success, we have to grow up and think about Sunday.”

Ibrahimovic returned to Milan in January 2020 and has been credited with helping turn the team into title contenders again as they target a 19th Serie A trophy and first since 2011, when he also played with the club.

The 39-year-old’s performances have also seen him recalled to the Sweden squad for upcoming World Cup qualifiers, reversing a five-year international retirement.

For Milan, as the other Italian teams, it was another bruising week of European football.

Atalanta and Lazio both exited the Champions League, after Juventus crashed out last week.

No Italian team have advanced to the quarterfinals of the elite European competition for the first time in five years.

Roma saved face in the Europa League with a 5-1 aggregate win over Shakhtar Donetsk in the Ukraine.

Meanwhile, Inter’s focus has been solely on the league since their Champions League group stage exit, and Antonio Conte’s side is on an eight-match winning streak.

However, their game against Sassuolo on Saturday has been postponed on the orders of health authorities after four Inter players contracted coronavirus this week including captain Samir Handanovic.

In their absence, second-placed Milan will be looking to get back to winning ways at 13th-placed Fiorentina and reduce their nine-point deficit before the international break.

Stefano Pioli’s side has lost ground to their city rivals in recent weeks with just two wins in their last six league games, and cannot afford another slip-up.

Juventus are a further point behind in third with a game in hand, and host lowly Benevento as they push for a 10th consecutive league title.

“It’s time to keep our heads down and stay united, showing that we believe until the end,” said Juventus captain Giorgio Chiellini.

Atalanta, in fourth, travels to mid-table Hellas Verona. The Bergamo side are just two points ahead of Champions League rivals Napoli and Roma, who go head-to-head in the Stadio Olimpico.