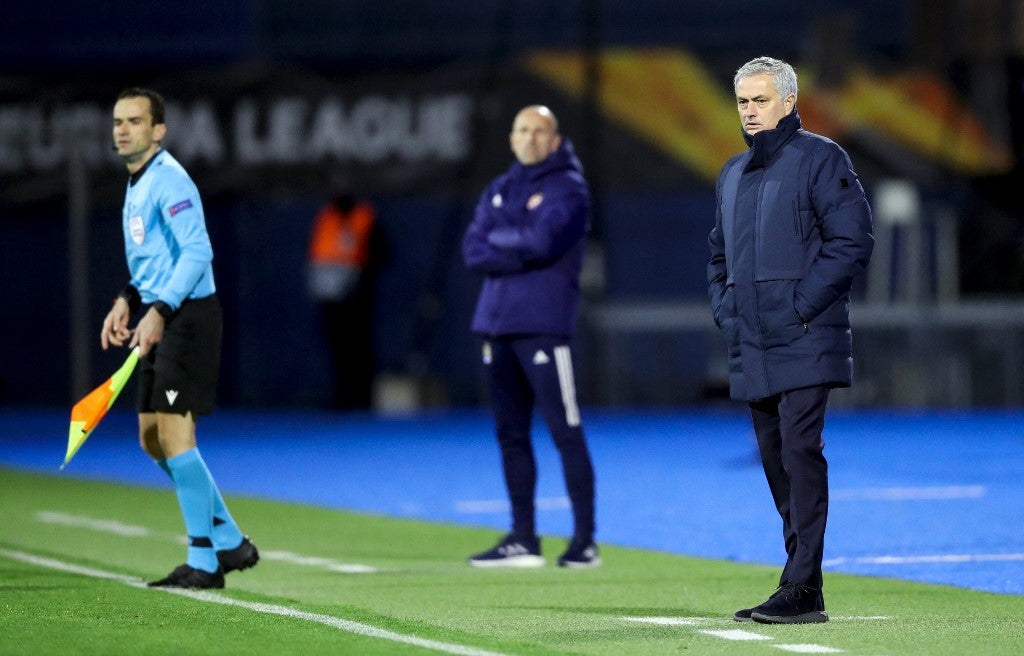 Tottenham’s Portuguese coach Jose Mourinho (R) looks on during the UEFA Europa League round of 16 second leg football match between Dinamo Zagreb and Tottenham Hotspur at the Maksimir Stadium in Zagreb, on March 18, 2021. (Photo by Damir SENCAR / AFP)

Spurs traveled to the Croatian capital holding a 2-0 first-leg lead and Mourinho showed no signs of complacency with his team selection, with Lloris and Harry Kane named in a strong line-up.

But two goals from Mislav Orsic forced the game into extra-time before the Croatian international completed a brilliant hat-trick to complete a miserable night for Mourinho’s men.

In a stinging post-match interview, Lloris, who is in his ninth season at Tottenham, criticized not just the performance but the underlying culture at the club.

"It's just a disgrace. I hope everyone in the changing room feels responsible."

“It is just a disgrace,” said the French World Cup winner. “I just hope everyone in the training room feels responsible for the situation because it’s a disgrace.

“Obviously we are a club full of ambition, but I just think the team at the moment is just a (reflection) of what’s going on in the club.

“We have lack of basics, lack of fundamentals, and all our performances are just in relation of that.”

Mourinho was just as scathing of his players for failing to match the desire of a Dinamo team that had been rocked earlier this week by the resignation of manager Zoran Mamic.

Mamic was sentenced to jail over a multi-million euro fraud involving player transfers, including Luka Modric’s move to Tottenham in 2012.

“To say I am sad is not enough. What I feel goes much further than sadness,” said Mourinho.

“To be a professional you must have attitude every day and in every minute of every game.

“Then more talent, less talent makes a difference between players but what is never negotiable is attitude and they beat us on attitude.”

Mourinho had previously bragged about his Europa League record, having won the competition on both his previous tries as manager of Porto and Manchester United.

The Europa League also offered a route back into the Champions League next season, with Tottenham sitting eighth in the Premier League and unlikely to bridge a six-point gap to the top four on current form.

As recently as December, Spurs topped the table, leading to talk of a first league title for 60 years.

However, the wheels have come off spectacularly in Mourinho’s first full season in charge.

If Tottenham misses out on the riches and prestige of Champions League football for a second consecutive season, it is not just the Portuguese manager’s future that will be the source of speculation.

Spurs have relied heavily on the goals of Kane and Son Heung-min for several seasons.

But with still no trophies to show for it, neither will be content to play Europa League football for another season in their prime.

Spurs chairman Daniel Levy made the bold call to sack Mauricio Pochettino and hire Mourinho 16 months ago due to his reputation as a serial trophy winner with Porto, Chelsea, Inter Milan, Real Madrid and United.

Mourinho has one last shot at redeeming this season and proving Levy right when Spurs aim to halt Manchester City’s quest for an unprecedented quadruple in the League Cup final next month.

But time is running out for the 58-year-old to dispel the notion that his best days are behind him.