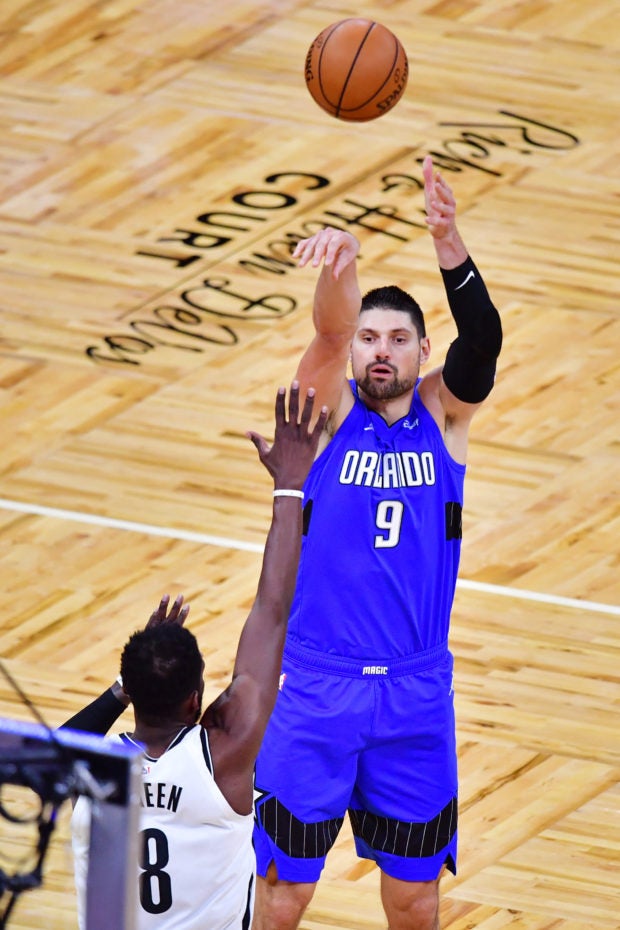 Nikola Vucevic of the Orlando Magic shoots a three-pointer against Jeff Green of the Brooklyn Nets in the first half at Amway Center on March 19, 2021 in Orlando, Florida. Vucevic, Evan Fournier and Aaron Gordon were traded by the Orlando Magic at Thursday’s NBA trade deadline according to multiple reports as the struggling club launched a rebuilding scheme.  (Photo by Julio Aguilar / GETTY IMAGES NORTH AMERICA / Getty Images via AFP)

NEW YORK  – Nikola Vucevic, Evan Fournier and Aaron Gordon were traded by the Orlando Magic at Thursday’s NBA trade deadline according to multiple reports as the struggling club launched a rebuilding scheme.

The Magic, whose record of 15-29 ranks fourth-worst in the league, sent Montenegrin 7-footer (2.13m) Vucevic to the ChicagoBulls along with Nigerian forward Al Farouq Aminu for Otto Porter, Wendell Carter Jr. and first-round NBA Draft picks in 2021 and 2023.

That was among multiple deals reported by ESPN and USA Today as the deadline came and went, while some discussed swaps didn’t happen, notably guard Kyle Lowry remaining with the Toronto Raptors and Lonzo Ball staying in New Orleans despite interest from several clubs.

Gordon and forward Gary Clark went to the Denver Nuggets in exchange for Gary Harris, R.J. Hampton and a first-round pick.

Rajon Rondo, an NBA champion guard with Boston in 2008 and the Los Angeles Lakers last year, was traded by the Atlanta Hawks to the Los Angeles Clippers for guard Lou Williams and two second-round draft picks, ESPN reported.

Toronto, set to lose Lowry in free agency after the season, sent Norman Powell to Portland for Gary Trent Jr. and Rodney Hood and also sent guard Terrence Davis to Sacramento for a second-round selection.

The Philadelphia 76ers obtained guard George Hill from the Oklahoma City Thunder and New York forward Ignas Brazdeikis in a three-team swap that landed Terrance Ferguson in New York and gave the Thunder Austin Rivers and Tony Bradley plus second-round picks in 2025 and 2026.

The Thunder, 19-25 this season, have a projected 34 selections over the next seven NBA Drafts, half of them first rounders.

The Houston Rockets, who have unloaded much of their top talent during the campaign, sent guard Victor Oladipo to the Miami Heat for guard Avery Bradley and center Kelly Olynyk.

The Heat are among a fistful of teams in a tight Eastern Conference race with Charlotte at 22-21 then Miami, New York and Atlanta at 22-22 and Boston at 21-23.

Some players could become available as free agents if clubs buy out their contracts and top among those playmakers could be Cleveland center Andre Drummond and San Antonio forward LaMarcus Aldridge, who could yet play key roles for contenders before the end of the season.