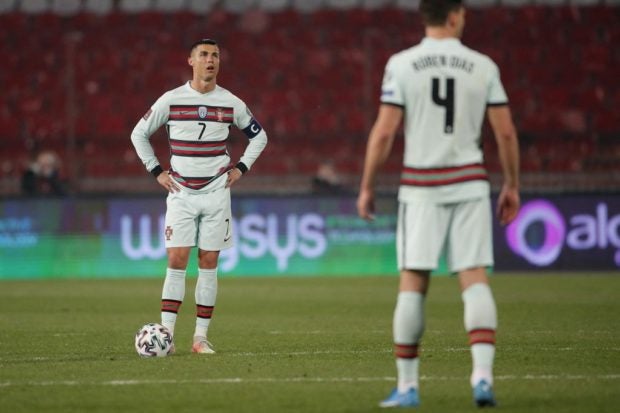 BELGRADE, Serbia — Portugal coach Fernando Santos said “it isn’t possible” that what he saw as a clear goal scored by Cristiano Ronaldo in Saturday’s World Cup qualifier against Serbia could be ruled out.

With the scores level at 2-2 in Belgrade, Ronaldo thought he had won the game in the 93rd minute when he slotted the ball home.

However, without VAR or goal line technology in use, officials decided that Serbia defender Stefan Mitrovic had cleared the ball before it crossed the line even though images appeared to show the goal should have stood.

“We scored a goal that was not given when the ball went in,” Santos told Portuguese broadcaster RTP.

“In a match of this level, that isn’t possible.”

The match had started brightly for the Portuguese with two first-half headers from Diogo Jota that gave the away side a commanding lead at the break.

However Aleksandar Mitrovic pulled one back for the hosts seconds after the restart and Filip Kostic levelled the scores on the hour mark when he collected Nemanja Radonjic’s through ball and slotted home a smart finish.

Nikola Milenkovic was sent off a minute into added time before the key moment of the match denied Ronaldo a last-gasp winner.

Portugal midfielder Danilo Pereira was equally dumbfounded at the decision to not award the goal.

“We tried to get a third goal and we managed to do it but the referee didn’t allow it although in my opinion it was clearly a goal,” he said.

“In any case, we can’t afford to be two goals ahead and then get pegged back.”