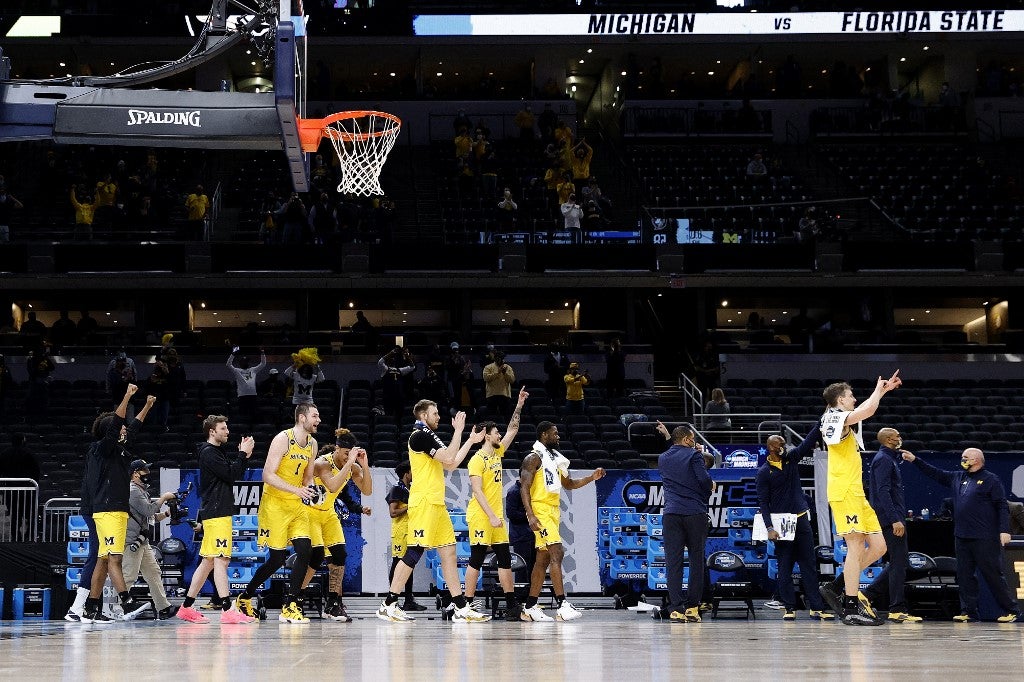 The Michigan Wolverines celebrate in the final moments of their Sweet Sixteen round win over the Florida State Seminoles in the 2021 NCAA Men’s Basketball Tournament at Bankers Life Fieldhouse on March 28, 2021 in Indianapolis, Indiana. Jamie Squire/Getty Images/AFP (Photo by JAMIE SQUIRE / GETTY IMAGES NORTH AMERICA / Getty Images via AFP)

Hunter Dickinson and Brandon Johns Jr. each scored a game-high 14 points for the Wolverines (23-4), who will play 11th-seed UCLA on Tuesday for the regional crown and a berth in the Final Four. The Bruins upset second-seed Alabama 88-78 in overtime later Sunday.

Franz Wagner added 13 points, 10 rebounds and five assists and Chaundee Brown chipped in 12 for Michigan, which converted 18 of 26 field-goal attempts in the second half. The Wolverines drew assists off all but three of those buckets and also enjoyed a 24-6 advantage in points off turnovers for the game.

Malik Osborne scored 12 points for the Seminoles (18-7), hitting 4 of 7 from 3-point range. M.J. Walker added 10 points, but he made only 5 of 14 field-goal attempts. Florida State canned only 40 percent of its shots from the floor and was outrebounded 37-31.

The final margin was actually flattering to the Seminoles. Michigan made just 15 of 23 free throws overall while struggling to shoot 33.3 percent from the field in the first half. Yet it still led 32-21 at intermission because Florida State experienced frightful difficulties offensively.

The Seminoles were 10 of 30 from the field and 0-for-7 at the 3-point line in the opening session, after finishing among the top 20 teams in Division I in 3-point shooting percentage. They also couldn’t take care of the ball, coughing up 10 turnovers.

When Florida State finally found a rhythm offensively in the second half, it couldn’t keep the Wolverines from clicking.

Anthony Polite’s 3-pointer pulled the Seminoles within 41-36 with 14:51 left, but Michigan calmly ripped off a 15-5 response and never looked back.

The margin grew as high as 23 in the final 90 seconds before Florida State made the final score look a bit more respectable by scoring the last five points.

The result eliminated the Atlantic Coast Conference from the tournament, while keeping the Big Ten’s only representative alive.