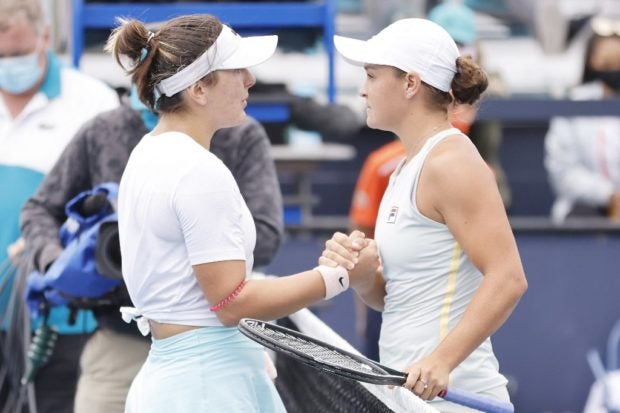 Australia’s Barty completed a 6-3, 4-0 victory after Andreescu was forced to retire in tears with an injury to her right ankle in the second set at the Hard Rock Stadium.

Barty had dominated the Canadian world number nine throughout the contest behind a powerful service game and accurate forehand.

The end came soon after the third game of the second set, when Andreescu collapsed to the court after rolling her right ankle during her service game.

Barty broke for a 3-0 lead as Andreescu, clearly struggling to move properly battled on. Despite being heavily strapped on her ankle, Andreescu retired soon afterwards, unable to continue.

It was a bitterly disappointing end for Andreescu, the 2019 US Open champion who missed the first few months of the 2020 season with a knee injury before last year’s pandemic shutdown.

“Definitely not the way I wanted to end the tournament, but I’m super-grateful nonetheless,” Andreescu, 20, said in comments on court after her defeat.

“I got to the final in one of my first tournaments in a while and I couldn’t be more happy.”

Andreescu revealed that she had initially wanted to play through the pain until being told to retire by her trainer.

“I really didn’t want to stop but my fitness trainer, he basically saved me from myself,” Andreescu said.

“I have been through that, just continuously pushing myself to the point where I’d make it worse. I trusted him. I knew it was the best decision.”

Barty, meanwhile, was left to reflect on a clinical victory in what was her first overseas appearance since the WTA Tour resumed after the shutdown.

“It’s been the perfect start for us,” said Barty, who arrived in Florida last month after a gruelling 50-hour journey from Australia.

“I did say to my coach when we got here ‘It can only get better from here.’ The fact that we’ve had a really successful couple of weeks, I felt like with each match I got better and better. And to have a title at the end of it is a bonus.

“Hopefully, it’s going to be a long and successful season. It’s a brilliant start,” added Barty, who now heads to next week’s Charleston event as she prepares for the clay court season.

The 24-year-old from Queensland controlled the game from the outset, moving Andreescu around the court relentlessly with accurate first serves and heavy groundstrokes.

After opening with a convincing hold of serve, Barty broke Andreescu in the second game, taking a 2-0 lead with a bludgeoning forehand that gave the Canadian no chance.

Another hold of serve put Barty 3-0 up, and although Andreescu took advantage of an erratic service game from the Australian to break back and close the deficit to 3-2, it was only a temporary reprieve.

Barty broke back immediately to go 4-2 ahead and then held easily for a 5-2 lead. Andreescu held for 5-3 but was unable to find a way through Barty’s serve as the world number one took the first set in the next game.

Andreescu was soon under pressure in the second set, suffering an early break to go 2-0 down.

She then appeared to roll an ankle while serving in the third game and crumpled to the court. She managed to continue but Barty broke again for 3-0 lead and the end followed soon afterwards when the youngster retired.

US defense chief arrives in PH, to meet with Duterte