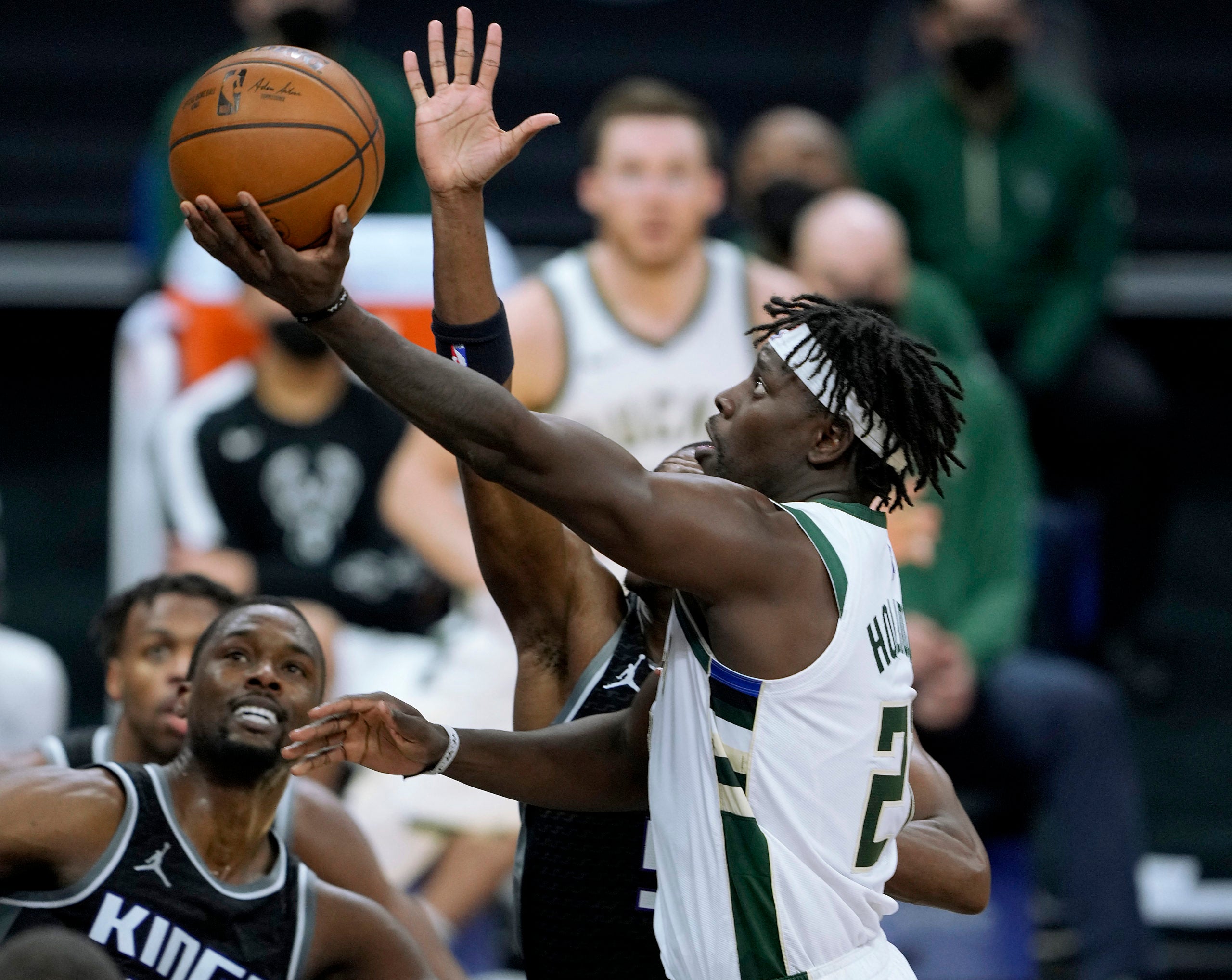 SACRAMENTO, CALIFORNIA – APRIL 03: Jrue Holiday #21 of the Milwaukee Bucks shoots against De’Aaron Fox #5 of the Sacramento Kings during the second half of an NBA basketball game at Golden 1 Center on April 03, 2021 in Sacramento, California. NOTE TO USER: User expressly acknowledges and agrees that, by downloading and or using this photograph, User is consenting to the terms and conditions of the Getty Images License Agreement. Thearon W. Henderson/Getty Images/AFP (Photo by Thearon W. Henderson / GETTY IMAGES NORTH AMERICA / Getty Images via AFP)

Jrue Holiday turned a short jumper into a three-point play with 1:32 to go, then added a driving hoop 33 seconds later Saturday night, allowing the visiting Milwaukee Bucks to stall a Sacramento Kings rally and pull out a 129-128 victory without Most Valuable Player candidate Giannis Antetokounmpo.

Holiday’s personal five-point flurry capped a season-best, 33-point night for the Bucks, who led 118-105 after a tip-in by Brook Lopez with 6:48 remaining.

But despite playing on the second night of a back-to-back, the Kings made an energetic late push, scoring the next 14 points to take a 119-118 lead on a Terence Davis 3-pointer with 2:06 to play.

That’s when Holiday saved the game for the Bucks, who improved to 3-1 without Antetokounmpo this season. He was given the night off to rest a sore left knee.

Davis, who shared Kings scoring honors with De’Aaron Fox with 27 points, had a pair of 3-pointers in Sacramento’s frantic late run. Fox added a three-point play, while Buddy Hield did the rest of the scoring on a dunk and a 3-pointer.

Donte DiVincenzo hit two late free throws and Pat Connaughton converted three of four to help secure the Bucks’ third straight win. They are now 3-1 on a six-game venture that continues Tuesday at Golden State and Thursday at Dallas.

A buzzer-beating 3-pointer by the Kings’ Davis accounted for the final one-point margin.

Holiday also found time for a game-high-tying 11 assists for the Bucks, who swept the two-game season series from the Kings.

Lopez added 26 points, Bobby Portis 18 and Khris Middleton 16 for the Bucks, who out-shot the Kings 53.8 percent to 49.5 percent. DiVincenzo complemented a game-high 14 rebounds with 12 points.

Davis shot 7-for-10 on 3-pointers for the Kings, who lost their third straight and second in two nights. They were drubbed 115-94 at home by the Los Angeles Lakers on Friday.

Delon Wright made it six Kings in double figures in scoring with 10 points off the bench.