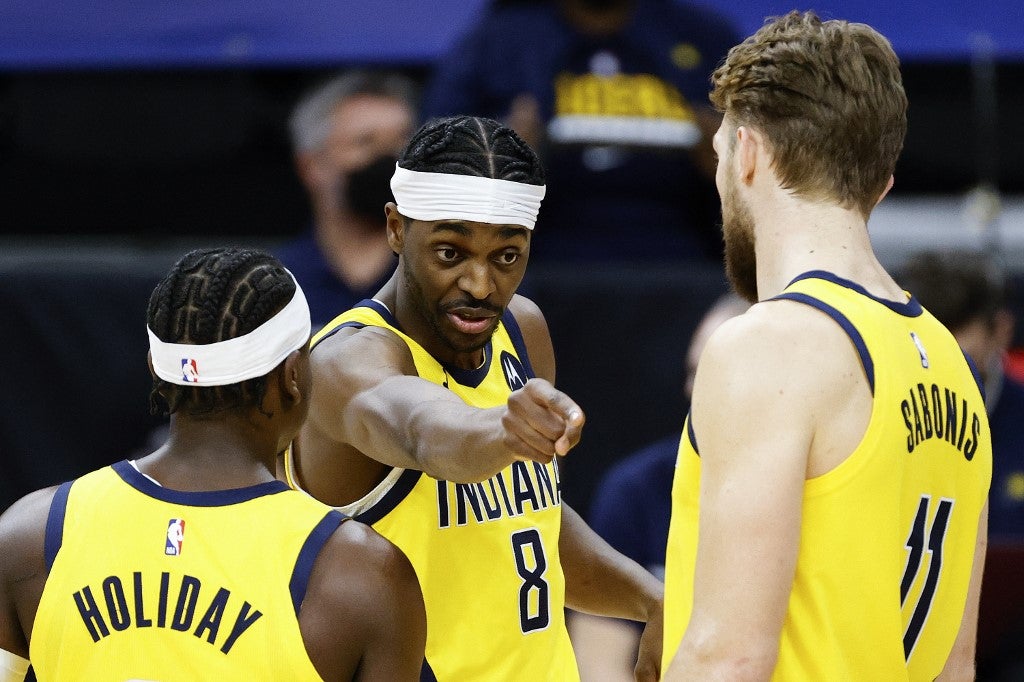 FILE — Justin Holiday #8 of the Indiana Pacers gives directions to Aaron Holiday #3 and Domantas Sabonis #11 during the fourth quarter against the Philadelphia 76ers at Wells Fargo Center on March 01, 2021 in Philadelphia, Pennsylvania. Tim Nwachukwu/Getty Images/AFP

Aaron Holiday scored 22 points off the bench and his brother Justin Holiday added 21 to fuel the Indiana Pacers to a 141-137 victory over the Minnesota Timberwolves on Wednesday in Indianapolis.

Caris LeVert finished with 18 points, JaKarr Sampson added 16 and Goga Bitadze chipped in with 14 to help Indiana record its fifth straight win against Minnesota. The Pacers posted a 134-128 overtime victory versus the Timberwolves on Feb. 17.

Karl-Anthony Towns recorded 32 points and 12 rebounds and rookie Anthony Edwards added 27 points for Minnesota, which failed in its bid to win back-to-back games for the first time since emerging victorious in its first two contests of the season.

Ricky Rubio and D’Angelo Russell each had 17 points and Naz Reid added 16 for the Timberwolves.

Russell converted a three-point play to trim Indiana’s lead to 135-132 with 50.2 seconds to play before McConnell countered by draining a 3-pointer just as the 24-second shot clock expired.

Rubio made two of three free-throw attempts to bring Minnesota within four with 15.5 seconds to play, but LeVert added a free throw at the other end. Russell sank another 3-pointer to bring the Timberwolves within two with 10.4 seconds remaining, but Aaron Holiday made both of free throws to effectively seal the win.

Indiana broke open a close game by erupting for 42 points in the second quarter to take a 77-56 lead at halftime. The Pacers’ point totals represented season highs for both a quarter and a first half, thanks in large part to shooting 60.4 percent from the floor while working the interior for 40 points in the paint.

Aaron Holiday drained a pair of 3-pointers while scoring 14 of the Pacers’ first 20 points in the second quarter. Bitadze connected from beyond the arc to cap a personal seven-point surge and LeVert made a driving layup at the buzzer to complete Indiana’s high-scoring quarter.