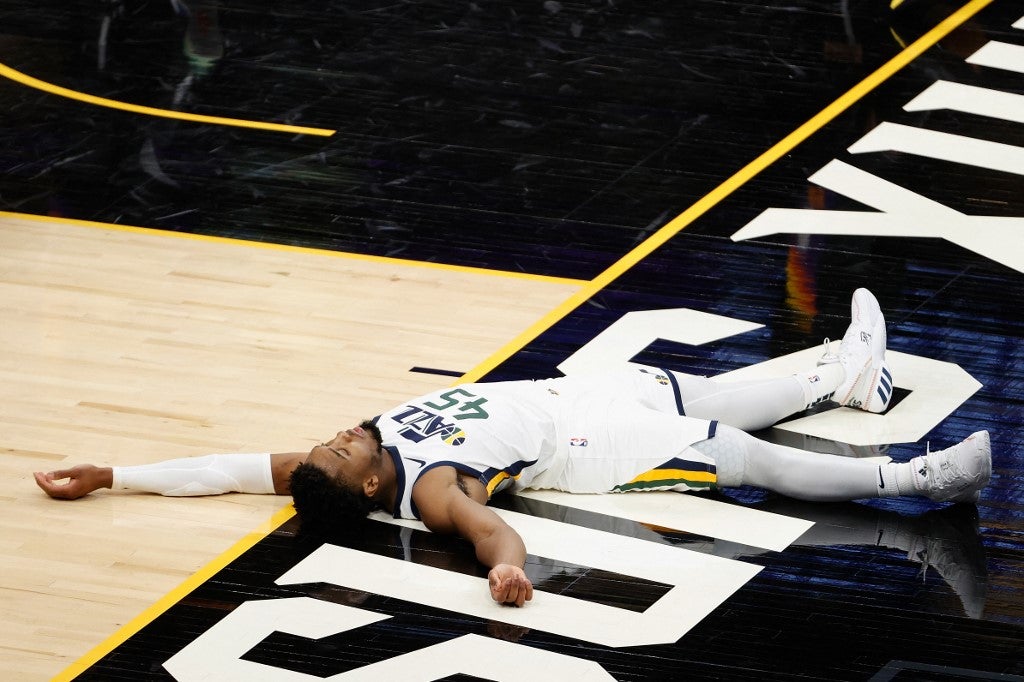 FILE — Donovan Mitchell #45 of the Utah Jazz lays on the court after scoring and drawing a foul against the Phoenix Suns during the second half of the NBA game at Phoenix Suns Arena on April 07, 2021 in Phoenix, Arizona.  Christian Petersen/Getty Images/AFP

Donovan Mitchell scored 37 points and Rudy Gobert compiled an 18-point, 20-rebound double-double to lift the Utah Jazz to a big 122-103 win over the Portland Trail Blazers on Thursday night in Salt Lake City.

The victory snapped a two-game losing streak — the Jazz stumbled on the road at Dallas and Phoenix — and secured the 23rd consecutive victory at Vivint Arena for NBA-leading Utah.

Four other Jazz players scored in double figures — Joe Ingles (13), Mike Conley and Bojan Bogdanovic (11), and Georges Niang (10) — as Utah bounced back 24 hours after a tough overtime loss to the Suns.

Damian Lillard topped Portland with 23 points and CJ McCollum scored 19, but the Blazers fell for the third time in four games after a disastrous seven-minute spurt midway through the second half.

The third quarter started well for the Blazers. Lillard hit a 3 to open the second-half scoring, and Norman Powell added an old-fashioned three-point play a moment later to put Portland up 62-56.

It was tied, 68-68, midway through the third before the Jazz offense went berserk. Mitchell hit a jumper to give the Jazz a lead, and Utah scored 25 points in the final six and a half minutes of the quarter while holding the Blazers to just four points until Carmelo Anthony hit a late 3.

That 40-19 advantage in the third quarter put Utah in excellent position to simply cruise to the final buzzer for another home win.

The fact that Conley played was a boon for the Jazz. He hadn’t been suiting up on the second end of back-to-back sets for months, but Utah was desperate for a win against a potential Western Conference playoff foe and the Jazz were without Sixth Man of the Year candidate Jordan Clarkson (ankle sprain) so he played.

Utah, which has more 3-pointers than any other team this season, did struggle for the third straight game from outside, though. The Jazz only connected on 12 of 42 3-pointers but still managed to shoot 45.3 percent overall.

The Jazz used a 58-41 rebounding edge to their favor as they played aggressively on the glass.

Portland struggled against Utah’s defense, shooting just 39.6 percent. Both Lillard and McCollum were 8-for-21 from the field and combined on 6-of-22 shooting from 3-point range.