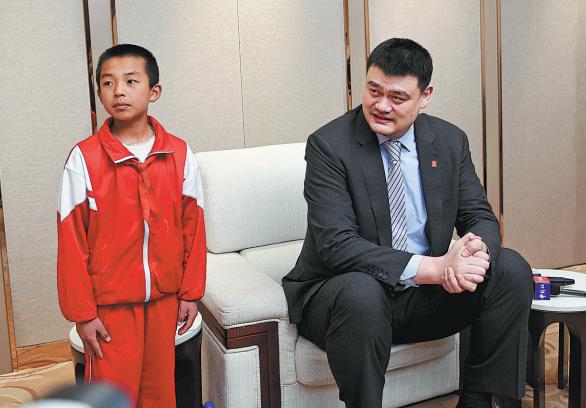 Twelve-year-old Wang Lei, whose hoops skills have propelled him to fame online, stands beside his idol Yao Ming during a basketball forum in Yinchuan, Ningxia Hui autonomous region on Friday. CHINA DAILY

BEIJING — Wang Lei’s skills on the court have won him millions of fans online－but none among them so cherished by the 12-year-old as his idol, Yao Ming.

Despite seemingly being the busiest man in Chinese basketball, Yao still made time to meet the young internet sensation while attending a basketball forum in Yinchuan, Ningxia Hui autonomous region on Friday.

“I feel very happy, excited, joyful. My dream has been realized!” said Wang after meeting the former Houston Rockets star, now the president of the Chinese Basketball Association (CBA).

Posters of Yao adorn Wang’s bedroom wall, motivating him to follow in the legend’s giant footsteps by one day becoming a professional basketball player.

Yao had learned of Wang’s talents from the news after a video of the boy bamboozling adults with his skills in their rural village went viral.

“It’s interesting. I had a teammate also named Wang Lei when I was in the national team, and we participated in the 2008 Beijing Olympic Games together,” Yao said.

Wang lives in Wangmin, a mountain village of Xiji county in Ningxia. His hometown is located in Xihaigu, labeled the “most unfit place for human settlement” by the United Nations in the 1970s.

Despite being without basic basketball facilities in the past, the people of Xiji are huge hoops fans, and inter-village tournaments sometimes attract audiences in excess of 10,000.

Like Yao’s father, Wang’s dad is heavily involved with the local team, and has been a constant source of encouragement for the kid since he fell in love with the sport aged 6.

In the courtyard of Wang’s home, makeshift basketball stands and boards were a constant companion throughout his childhood.

Standing about 1.5 meters tall now, Wang is still shorter than a sitting Yao, but adults in the village team still struggle to fend off his incisive attacks on the court.

In recognition of his talents, Wang unexpectedly received a basketball with Yao’s signature.

“To have a goal is of great significance. I hope you can figure out your goal when you study or play basketball,” Yao told Wang. “You need to make it clear what you want to be.”

In response to Yao’s encouraging words, Wang said: “I will study hard and enter an excellent high school, then a good college, and become a professional basketball player after graduation.”

As a grade-A student in Yuanhe Middle School, Wang plays basketball for over two hours on weekdays and over 10 hours on weekends. He has worn out over a dozen of basketballs and more than 20 pairs of shoes.

Compared with his father, Wang is lucky. “I used to be covered by dust when dribbling the ball and running, but now the cement floor is all around, and I won’t be choked any longer,” said the youngster.

Thanks to China’s poverty alleviation campaign, Xiji officially exited poverty in November last year. All its 295 villages have benefited from the Farmers’ Fitness Project and were installed with standard basketball stands as well outdoor courts, with a per capita sports area of 2.2 square meters.

The old backboard in Wang’s courtyard has been removed, and now he has a choice of courts to practice his skills.

Last year Wang led his class to a championship triumph, and now Yuanhe Middle School has over 10 sports clubs and three PE teachers.

Despite all the recent attention he has enjoyed, Wang is far from complacent. “My skills are still very poor,” he sighed. “I have to practice harder, and Yao has given me more strength.”

“We should work harder to find more talents like him and deliver a positive lifestyle with practical measures,” he said.

Ningxia Basketball Federation is planning to cooperate with the CBA to train more professional coaches for Xiji and stage more hoops activities in schools, according to Chen Gang, the association’s secretary-general.

“In this way, we can produce more basketball boys and girls like Wang and satisfy people’s sporting needs,” Chen said. Xinhua