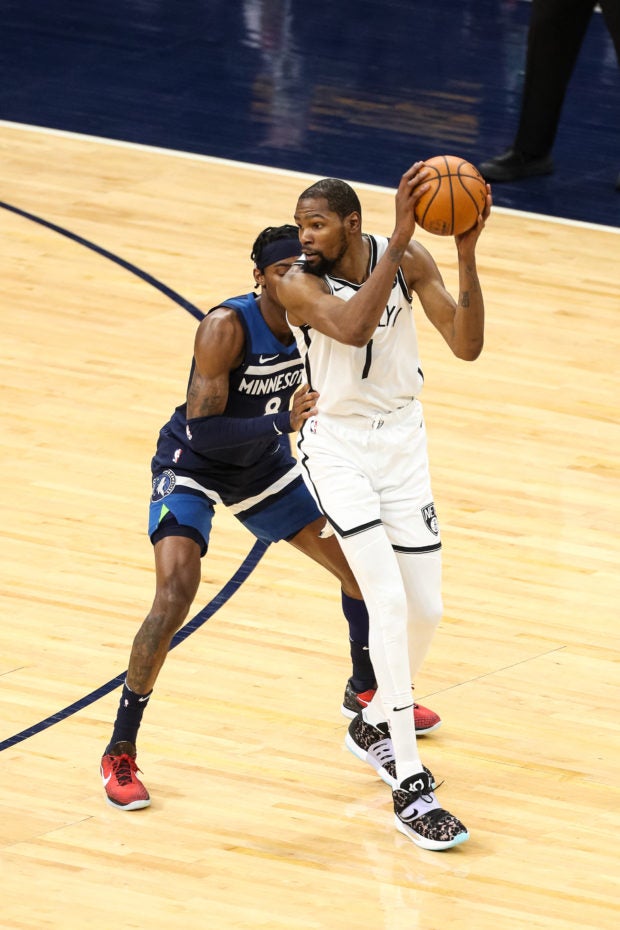 Kevin Durant of the Brooklyn Nets looks to pass against Jarred Vanderbilt #8 of the Minnesota Timberwolves in the third quarter of the game at Target Center on April 13, 2021 in Minneapolis, Minnesota. The Nets defeated the Timberwolves 127-97.   (Photo by David Berding / GETTY IMAGES NORTH AMERICA / Getty Images via AFP)

MINNEAPOLIS  – Kevin Durant scored 31 points as the Brooklyn Nets bounced back from a thumping defeat to the Los Angeles Lakers with a one-sided romp against the Minnesota Timberwolves on Tuesday.

Durant led the scorers in a 127-97 victory for the Nets, who are neck-and-neck with the Philadelphia 76ers at the top of the Eastern Conference with both teams owning identical 37-17 records.

Tuesday’s game at the Target Center in Minneapolis had been delayed by 24 hours as the city reeled from the aftermath of the deadly police shooting of Daunte Wright, a 20-year-old Black man, during a traffic stop on Sunday.

Durant, making only his third appearance since returning from a near two-month injury layoff, wasted no time in asserting himself, scoring eight points in the first five minutes on court.

The Timberwolves, who have the worst record in the NBA with only 14 victories this season and 41 losses, were never in contention and trailed by a massive 45 points at one stage in the fourth quarter.

Durant got help from guard Joe Harris, who finished with 23 points and Landry Shamet, who added 19 off the bench. DeAndre Jordan also cracked double figures with a 13-point contribution.

Durant said the Nets had blocked out the backdrop of racial tension in Minneapolis which forced the postponement of the game on Monday.

“I think guys are obviously aware of what’s going on in our country, we have conversations about this all the time,” Durant said. “But once we step on the floor we understand what our job is.”

The former NBA Most Valuable Player meanwhile said the Nets were simply happy to have avoided a wasted trip to Minnesota.

“I’m glad the NBA made the game happen and that we didn’t come out here for nothing and we finished it off,” said Durant.

“I felt good out there. I feel like my wind and legs are getting under me with each and every minute I’m playing.”

The Nets face a crunch clash with the Sixers on Wednesday but a decision on whether or for how long Durant would play will only be taken after an assessment by team staff, Nets coach Steve Nash said.

“We’ll assess Kevin tonight and tomorrow morning,” said Nash, who was pleased by his team’s clinical victory despite a raft of absentees including Kyrie Irving, James Harden and LaMarcus Aldridge.

“Guys have stepped up,” Nash said. “We’ve got a lot of wins this season where we’ve been undermanned. I’m proud of the effort and tonight was another one where we took care of the task in front of us.”

Nash, a two-time former NBA MVP, meanwhile ruled out making himself available for the injury-hit Nets.

“I’d be great for four or five minutes and then the wheels would fly off,” the 47-year-old joked. “Think I’ll save the world that horror show.”