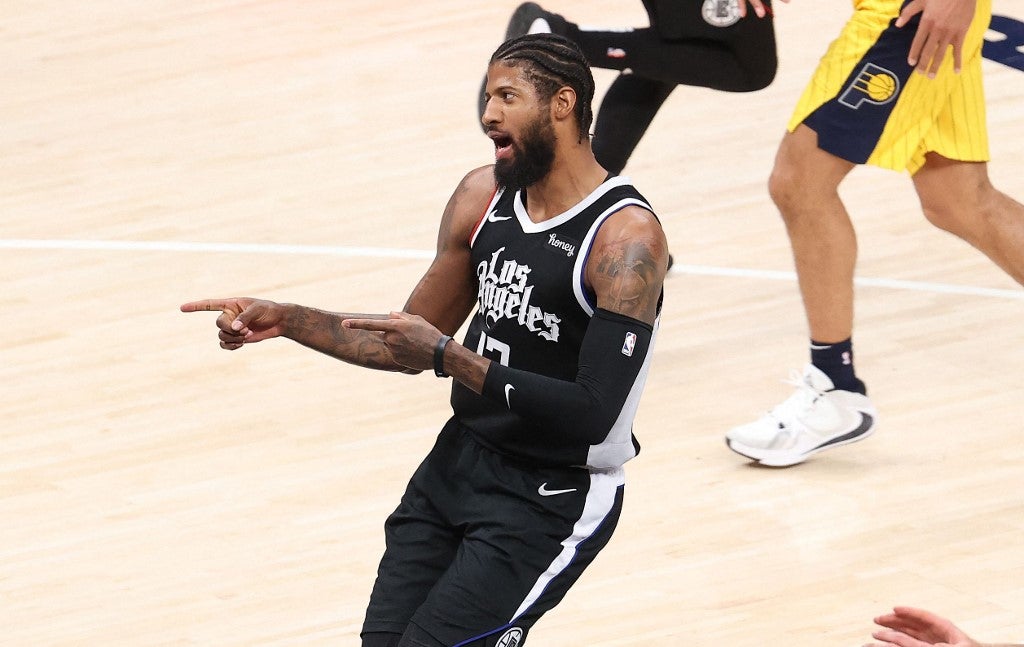 Paul George #13 of the Los Angeles Clippers celebrates after a basket against the Indiana Pacers at Bankers Life Fieldhouse on April 13, 2021 in Indianapolis, Indiana. Andy Lyons/Getty Images/AFP

Paul George scored 36 points, grabbed seven rebounds and dished eight assists to lead the Los Angeles Clippers to a 126-115 win over one of his former teams, the Indiana Pacers, Tuesday in Indianapolis.

Despite the absence of leading scorer Kawhi Leonard due to a right foot injury, Los Angeles held the lead for much of the night.

George, who played for the Pacers from 2011 through 2017, recorded 32-plus points for the fourth consecutive game, while the Clippers reeled off their sixth straight win. George also helped ignite a critical 8-0 run to open the fourth quarter.

He scored four points and found Terance Mann for a dunk in the quick flurry, which opened up an 11-point Clippers lead that the Pacers struggled to trim. Indiana pulled within nine points on a few occasions, but Los Angeles continually answered.

Marcus Morris Sr. followed up his season-best 33 points in Sunday’s win over the Pistons with 22 points on 9 of 12 shooting from the floor, including a perfect 3 of 3 from 3-point range. As a team, Los Angeles shot 13 of 28 beyond the arc, led by George’s 4 of 7.

Nicolas Batum added 14 points and registered a game-best 22 plus-minus rating. Ivica Zubac scored 14 points on 7 of 8 shooting from the field, Mann finished with 12 points off the bench, and Luke Kennard shot 2 of 3 from 3-point range en route to 10 points.

Tuesday’s win kicked off a three-game, Eastern Conference road swing for the Clippers on a positive note. Indiana, meanwhile, had its three-game winning streak snapped ahead of the first game in a three-game road swing that begins Wednesday in Houston.

Malcolm Brogdon led the Pacers with 29 points. Caris LeVert scored 26 points coming off his high since joining Indiana of 34 points, and Domantas Sabonis notched his eighth consecutive double-double with 20 points and 13 rebounds.

T.J. McConnell rounded out Indiana’s double-figure scoring with 13 points off the bench, but the Pacers got little else from the reserves. The Los Angeles bench outscored Indiana’s, 38-25. The Pacers also shot a dismal 9 of 40 from 3-point range.