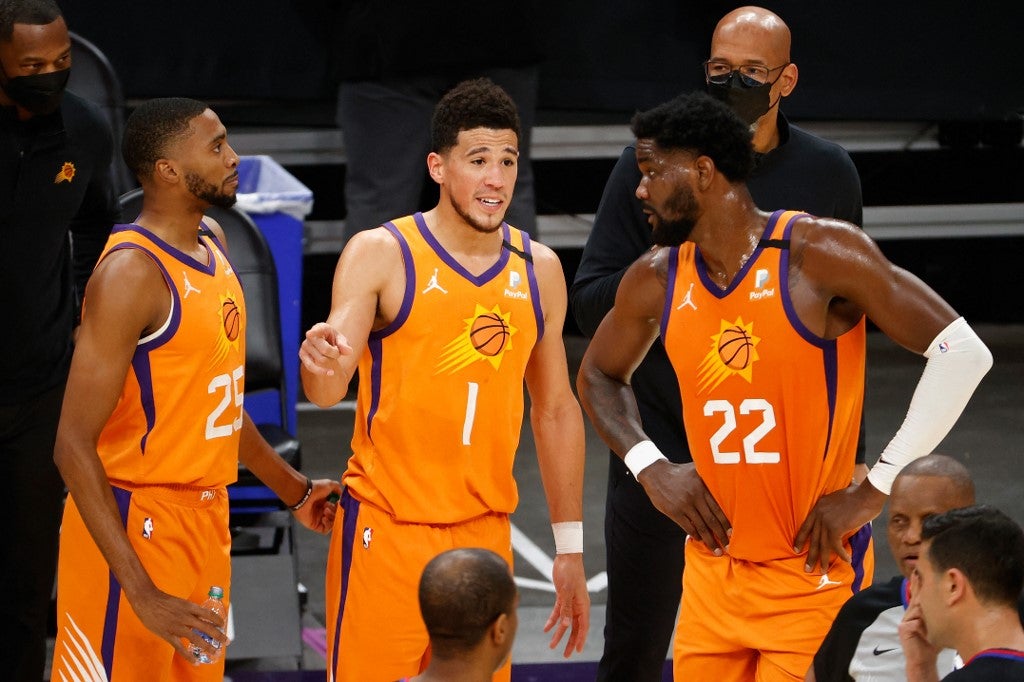 FILE – Devin Booker #1 of the Phoenix Suns talks with Mikal Bridges #25 and Deandre Ayton #22 during the first half of the NBA game against the Oklahoma City Thunder at Phoenix Suns Arena on April 02, 2021 in Phoenix, Arizona. NOTE TO USER: User expressly acknowledges and agrees that, by downloading and or using this photograph, User is consenting to the terms and conditions of the Getty Images License Agreement. Christian Petersen/Getty Images/AFP (Photo by Christian Petersen / GETTY IMAGES NORTH AMERICA / Getty Images via AFP)

Deandre Ayton finished with 19 points and 13 rebounds to propel the host Phoenix Suns to a 106-86 victory over the Miami Heat on Tuesday night.

Ayton, who shot 8-for-10 from the field, was one of six Suns who scored in double figures. Four of those were reserves as Phoenix’s bench outscored Miami’s second unit 65-24.

Phoenix prevailed despite a poor shooting night from Devin Booker, who finished with 12 points but shot 4-for-16 from the field. Chris Paul shot just 2-of-7 from the field but totaled nine assists. Paul’s three steals gave him 2,311 for his career, surpassing Maurice Cheeks for fifth all-time on the NBA’s career steals list.

Congrats to @CP3 of the @Suns for moving up to 5th on the all-time STEALS list! pic.twitter.com/jMIEbIW3D9

Jimmy Butler led Miami with 18 points and eight assists, but the Heat struggled from long distance against Phoenix’s defense. Miami shot 9-for-44 from 3-point range (20.5 percent).

Duncan Robinson was the lone bright spot in that department, finishing with 15 points and making 4-of-10 from beyond the arc.

Miami started the game outscoring Phoenix 22-11, led by nine early points from Robinson. The Heat led by eight after one.

The Suns answered by outscoring the Heat 57-38 over the second and third quarters.

Bam Adebayo totaled 11 points and 10 rebounds but took only six shots. Goran Dragic had 12 points while Tyler Herro and Trevor Ariza each had 10 points.

Butler fell to the court grabbing his right ankle with 11:40 left in the fourth quarter but returned with 7:52 remaining and played up until the 3:19 mark with Phoenix comfortably ahead, 99-83.