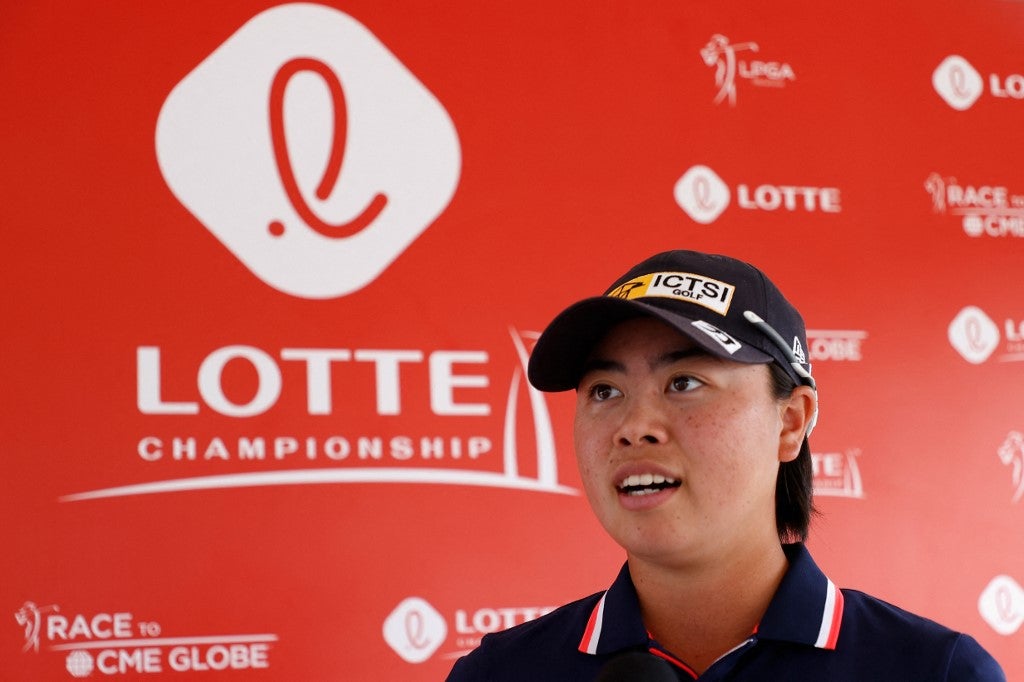 Yuka Saso of the Philippines talks with the media following the first round of the LPGA LOTTE Championship at Kapolei Golf Club on April 14, 2021 in Kapolei, Hawaii. Christian Petersen/Getty Images/AFP (Photo by Christian Petersen / GETTY IMAGES NORTH AMERICA / Getty Images via AFP)

Filipino golfer Yuka Saso gained a share of the lead in the opening round of the LPGA Lotte Championship on Wednesday.

Saso, who made history for the Philippines with double Asian Games golf gold in 2018, and American Brittany Altomare finished atop a tight leaderboard that also includes Canadian Brooke Henderson in search of her third straight title.

The 19-year-old was first in the clubhouse on eight-under par 64, racing home with four of her eight birdies at her last four holes.

Altomare followed with an even more impressive surge, stringing together seven straight birdies after the turn on the way to nine birdies and a bogey for an eight-under total.

Saso, a two-time winner on the Japan LPGA tour, said there was no real secret to her success at Kapolei Golf Club in Oahu, Hawaii.

“I made some good putts, had good up and downs, my driving was very consistent today,” said Saso, who is playing this week on a sponsor’s exemption.

Saso knows the going could be tougher when she tees off in the afternoon on Friday, when the wind is likely to be more of a factor.

“Back nine the wind did get stronger than this morning,” said Saso, who opened with a birdie on 10 and added birdies at 17 and 18 and the fourth before reeling off birdies at six, seven, eight and nine.

After 18 holes in Hawaii, @Brittalto and Yuka Saso share the lead at 8-under at the @LPGALOTTE ⛳️

“I think I just have to be careful with my drives, keep it in the fairway as much as possible, and trust the process.”

Nelly Korda teed off in the afternoon group and made a charge up the leaderboard to finish one back of the leaders at seven under 65. Henderson shot a four-under 68 to sit just four strokes back of Altomare and Saso.

Altomare, ranked 52nd in the world and in search of her first LPGA Tour win, opened with a birdie at the 10th and was one-under at the turn after a birdie at 14 and a bogey at 15.

She then birdied seven straight from the first through the seventh before finishing with back-to-back pars.

Like Nelly Korda, South Korean Ryu So-yeon and American Ally Ewing were on seven-under, each with seven birdies in bogey-free rounds. Korda finished with eight birdies and nine pars. Her only blemish was a bogey on the par-three fifth.

One shot back is Stacy Lewis, who shot a six-under 66.

Henderson and China’s Lily Muni He lead a pack of golfers all tied at four under.

Henderson has a chance to become the first LPGA player to earn a three-peat since South Korea’s Park In-bee at the KPMG Women’s PGA Championship from 2013 to 2015.