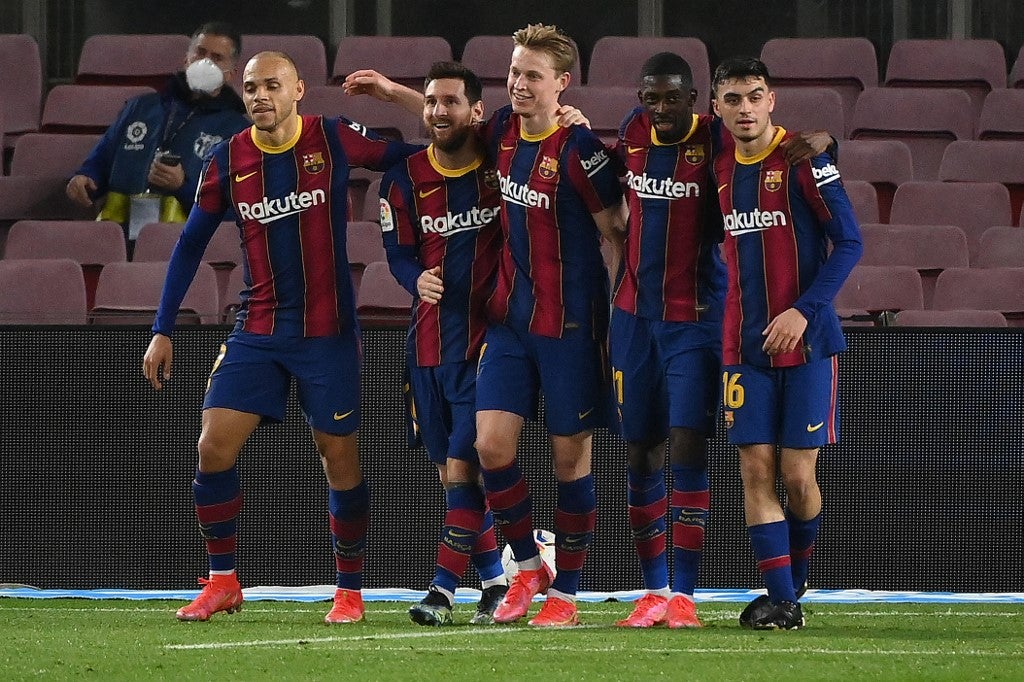 Barcelona’s Argentinian forward Lionel Messi (2ndL) celebrates with teammates after scoring a second goal during the Spanish league football match between FC Barcelona and Elche CF at the Camp Nou stadium in Barcelona on February 24, 2021. (Photo by LLUIS GENE / AFP)

A planned breakaway Super League announced by twelve of European football’s most powerful clubs and backed by US investment bank JP Morgan was roundly condemned by fans and federations across the continent on Monday, with UEFA meeting to hold crisis talks over the threat posed to its flagship competitions.

A joint statement said three more clubs would be invited to join the founding members before the start of the competition “as soon as possible”.

Organizers have also filed a motion “before the relevant courts” to “ensure the seamless establishment and operation” of the Super League, according to a letter seen by AFP and addressed to UEFA president Aleksander Ceferin as well as FIFA chief Gianni Infantino.

The clubs, most of them saddled with debt and large wage bills, and hit hard by the pandemic, stand to benefit financially. JP Morgan confirmed it is financing the breakaway league.

“I can confirm that we are financing the deal, but have no further comment at the moment,” a bank spokesman said in a statement to AFP.

The founding clubs will share 3.5 billion euros for infrastructure investment and to offset pandemic costs, and are expected to receive a further 10 billion euros in “solidarity payments” over the life of the initial commitment — much more than is available in the current Champions League.

The 15 eventual founders will be guaranteed to play each year in a competition intended to take place in midweek, allowing clubs in theory to continue participating in domestic leagues.

Another five places will be available “based on achievements in the prior season”.

The absence of French and German teams from the founding members is notable, despite Bayern Munich and Qatar-owned Paris Saint-Germain reaching last season’s Champions League final.

However, a source close to the 12 founding clubs told AFP that “at least two French clubs” are set to be involved every year, without revealing who they would be.

The Super League announcement appeared to be timed to pre-empt UEFA’s own scheduled unveiling of reforms to the Champions League on Monday, with an expansion to 36 teams from 32 and a minimum of 10 group games for each team.

European football’s governing body met for an executive committee meeting having already described the plans as “cynical” in a joint statement with the three countries’ football associations and domestic leagues.

“The clubs concerned will be banned from playing in any other competition at domestic, European or world level, and their players could be denied the opportunity to represent their national teams,” the statement said.

The reaction from fans and pundits was furious.

The Tottenham Hotspur Supporters Trust — whose club on Monday separately announced the sacking of coach Jose Mourinho — called it a “betrayal”.

“It’s the death of football… Football is based on the concept of competitive balance, sporting competition and qualifying on merit,” Tim Payton, head of the Arsenal Supporters Trust, told AFP.

“What is the point of going to watch Arsenal play Everton this Friday if we know they’ve already qualified for a so-called Super League next year?”

Under the plan, two groups of 10 will play each other home and away, with the top three qualifying for the quarter-finals. The fourth and fifth-placed teams would play off for the two remaining spots.

Then the competition would adopt the same two-leg knockout format used in the Champions League before a single-leg final in May.

World governing body FIFA’s response was less stringent than that of UEFA, as it expressed its “disapproval” and called on all parties “to engage in calm, constructive and balanced dialogue”.

British Prime Minister Boris Johnson said the clubs “must answer to their fans and the wider footballing community before taking any further steps”.

The European Club Association said it “strongly opposes” the Super League while the Premier League, the richest in Europe, issued a furious statement.

“Fans of any club in England and across Europe can currently dream that their team may climb to the top and play against the best,” it said.

“We believe that the concept of a European Super League would destroy this dream.”

‘Lots more to do’

However, Arsenal, who is ninth in the Premier League, hinted at the obstacles ahead, saying “there’s lots more to do to bring the competition to life”.

Juventus, whose share price leaped seven percent on the opening of the Milan stock exchange, also warned that it “cannot assure that the project will be eventually successfully launched”.

Juventus are facing a battle to finish in the Serie A top four this season, and seven-time European champions AC Milan have not played in the Champions League since 2014.

“Football is the only global sport in the world with more than four billion fans and our responsibility as big clubs is to respond to their desires,” he said.