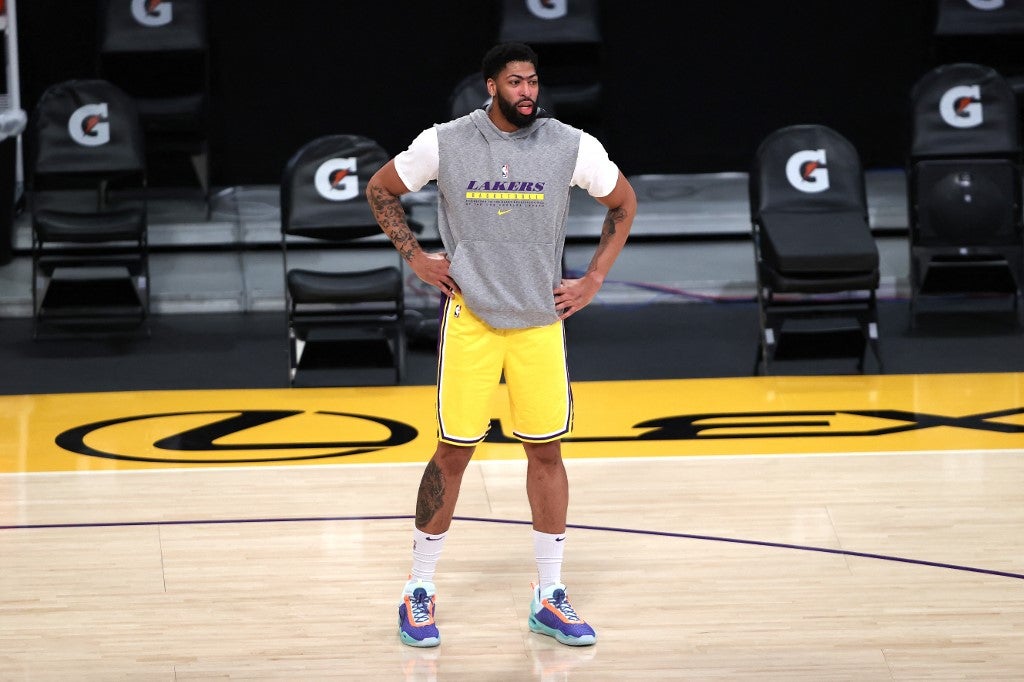 FILE — Anthony Davis #3 of the Los Angeles Lakers works out prior to a game against the Cleveland Cavaliers at Staples Center on March 26, 2021 in Los Angeles, California. Sean M. Haffey/Getty Images/AFP

The reigning NBA champion Los Angeles Lakers expect to have Anthony Davis back on Thursday night when they play the Mavericks in the first game of a two-game series in Dallas.

Davis’ return is the first major step for the Lakers (35-23) to get back to full strength in advance of the postseason. Los Angeles continues to await the return of four-time NBA Most Valuable Player LeBron James from an ankle injury.

The Lakers have gone 14-16 without Davis and 7-9 without him and James, dropping to fifth in the Western Conference standings. The Lakers have especially struggled lately, suffering wire-to-wire losses to the Boston Celtics and Utah Jazz on their recently completed three-game homestand.

Davis said Wednesday he feels “100 percent” healthy from the calf strain and tendinosis in his right leg, which has held him out of action since Feb. 14.

“I never tore an Achilles, but I kind of felt like sharp pain, like it was ripping, which I had never felt before,” Davis said. “So I knew it was something serious. It wasn’t as serious as it could have been, but it was still a pretty significant injury.”

James, however, might still be a couple of weeks away from returning, according to a report by ESPN.

Lakers coach Frank Vogel said James, who hasn’t played since March 20 and missed the Lakers’ past 16 games with a high ankle sprain, has advanced to doing some “light work.”

“The biggest thing is conditioning right now,” Vogel said Monday. “He’s healthy. But having not played and not really being able to ramp up his physical on-court activity over the last two months, it’s going to take some time before he gets his wind under him and obviously, that’s the biggest thing.”

Davis led the Lakers with 28 points in a 138-115 victory over the Mavericks on Christmas Day.

Dallas (31-26) holds the seventh seed in the Western Conference and snapped a four-game home losing streak Wednesday with a 127-117 win over the Detroit Pistons.

Luka Doncic had 27 points and seven assists in that first meeting for Dallas but was held to four rebounds. He was 9-of-19 shooting from the field on the night.

On Wednesday against Detroit, Doncic finished one assist shy of his 10th triple-double of the season, totaling 30 points, 10 rebounds and nine assists.

Dallas’ Kristaps Porzingis had 19 points and seven rebounds while Jalen Brunson scored 18 of his 20 points in the first half.

“We’ve got to continue to stay positive,” Brunson said. “We have a strong finish to uphold. There’s going to be a lot of trying times. We’ve got to keep it together.”

Despite being listed as dealing with an illness, Tim Hardaway Jr. scored 15 points in 26 minutes against the Pistons. Maxi Kleber left the game in the first half with a lower-back contusion.

For the Lakers, Marc Gasol has missed the past two games with a fractured left pinky finger but is listed as questionable for Thursday’s game, according to the NBA’s daily injury report. Markieff Morris (left-ankle sprain) and Dennis Schroder (right-foot infection) are listed as probable.