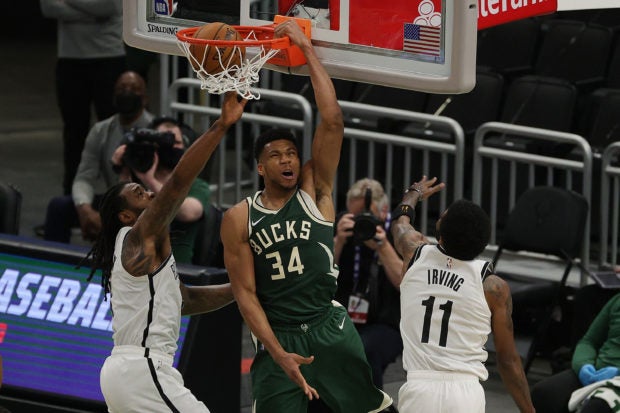 Giannis Antetokounmpo of the Milwaukee Bucks dunks in front of DeAndre Jordan #6 and Kyrie Irving #11 of the Brooklyn Nets during the first half of a game at Fiserv Forum on May 02, 2021 in Milwaukee, Wisconsin.  (Getty Images via AFP)

LOS ANGELES – Giannis Antetokounmpo scored a season-high 49 points in his return from an injury as the Milwaukee Bucks overcame Kevin Durant’s 42-point performance to beat the Brooklyn Nets 117-114 on Sunday.

Two-time reigning NBA Most Valuable Player Antetokounmpo, who had been dealing with a sprained right ankle, outdueled Durant in the Eastern Conference clash between the two highest-scoring teams in the league.

Antetokounmpo finished just three points short of his career high, which he set two years ago against Philadelphia.

Antetokounmpo praised his teammates for the win, saying they had to tighten up defensively against the high-scoring Nets.

“We just trust one another and kept playing hard and moving the ball,” said Antetokounmpo, who showed no signs of the ankle injury. “They have great players so we had to lock in, trust one another on defense and execute on offense.”

Antetokounmpo shot 21-of-36 from the floor and added eight rebounds while teammate Khris Middleton finished with a double-double of 26 points and 11 rebounds.

Durant scored 42 points and grabbed 10 rebounds for the Eastern Conference-leading Nets, who are trying to hang onto first place during the final stretch of the regular season.

Antetokounmpo said he didn’t want to get into a scoring duel with Durant and just tried to focus on the strengths in his game.

“KD is one of the greatest scorers ever to play the game,” Antetokounmpo said. “If you try to go back and forth with him, he’s going to score 70. I was able to slow down and get to my spots. I kept being aggressive.”

The two teams play again on Tuesday night in Milwaukee in a rivalry many see was a playoff preview.

Kyrie Irving scored 20 points and Landry Shamet tallied 17 for the Nets, who have won four of their past six games.