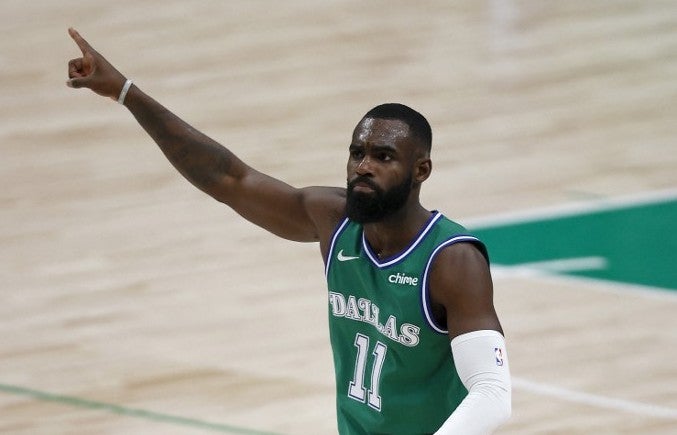 FILE –Tim Hardaway Jr. #11 of the Dallas Mavericks reacts after scoring against the Memphis Grizzlies in the second half at American Airlines Center on February 22, 2021 in Dallas, Texas.Tom Pennington/Getty Images/AFP

Tim Hardaway Jr. matched the franchise record with a career-high 10 3-pointers as part of a 36-point effort to help the Dallas Mavericks rally for a 127-113 victory over the host Miami Heat on Tuesday night.

Luka Doncic registered 23 points, 12 rebounds and eight assists as the Mavericks (37-28) won for the seventh time in the past nine games. Dallas shares the fifth-best record in the Western Conference with the slumping Los Angeles Lakers and owns the tiebreaker.

Jalen Brunson scored 19 points, Jason Richardson added 17 and Dorian Finney-Smith had 12 for the Mavericks, who trailed by 11 in the opening minutes before later exploding to outscore the Heat 68-38 over the middle two quarters.

Trevor Ariza scored 16 of his 18 points in the first quarter for the Heat, who had a three-game winning streak snapped. Kendrick Nunn and Gabe Vincent scored 14 points apiece and Bam Adebayo had 11 points, 11 assists and nine rebounds for Miami.

Dallas big man Kristaps Porzingis (knee) sat out for the sixth time in the past seven games.

Hardaway matched his career high of nine 3-pointers by knocking one down to make it 112-89 with 7:39 left.

Hardaway, who finished 10 of 18, missed three opportunities to set a new standard before exiting with 1:43 left.

Miami trailed 71-67 five-plus minutes into the third quarter before Hardaway went on a game-changing run.

Overall, Hardaway scored 18 points during a stanza that concluded with the Mavericks up 98-77.

The Dallas lead topped out at 26 points.

Dallas moved ahead for good with a quarter-ending 13-2 spurt to hold a 63-54 lead at the break.