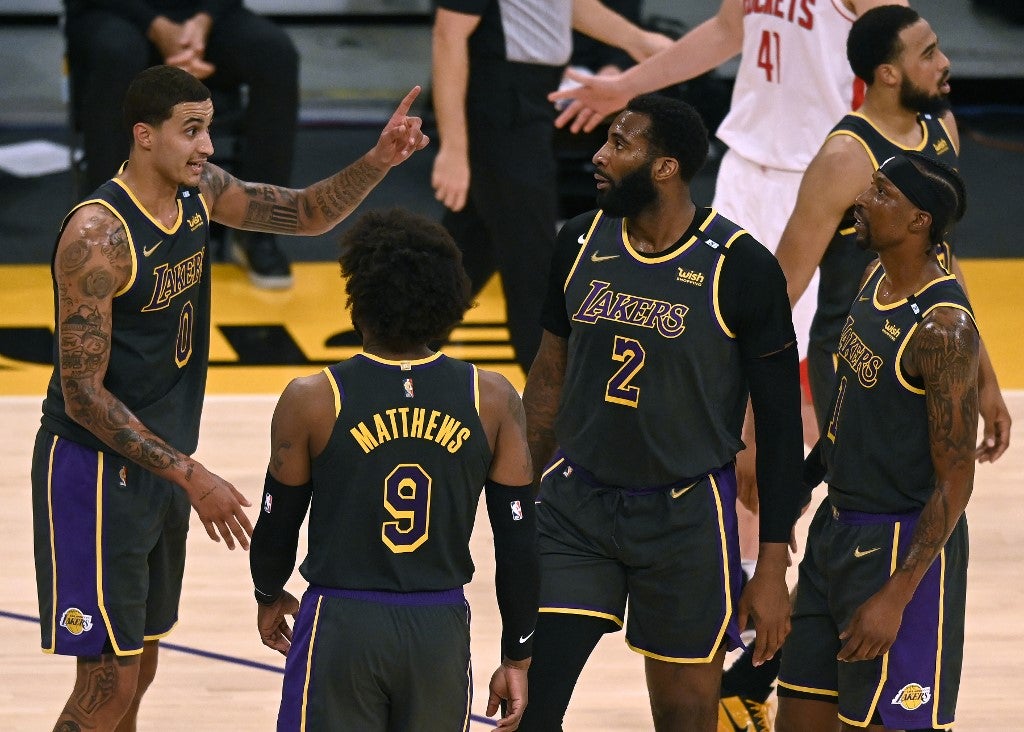 Kyle Kuzma #0 of the Los Angeles Lakers talks to Wesley Matthews #9 Andre Drummond #2 and Kentavious Caldwell-Pope #1 after a stop in play against the Houston Rockets during the second quarter at Staples Center on May 12, 2021 in Los Angeles, California. Harry How/Getty Images

Kyle Kuzma drove for the decisive layup with 6.9 seconds remaining to give the Los Angeles Lakers a 124-122 victory over the visiting Houston Rockets on Wednesday night.

The Lakers played without LeBron James (ankle) for the 26th time in the past 28 games. Anthony Davis (adductor) also sat out.

Houston’s chance to win was thwarted when Wesley Matthews forced Kelly Olynyk to fumble the ball. Horton-Tucker recovered it and was fouled, splitting two free throws with 0.9 seconds left, missing the second on purpose.

Armoni Brooks scored a career-best 24 points and Olynyk also had 24 for Houston (16-54), which has lost seven straight games and 44 of their past 49. Kenyon Martin Jr. added 20 points and 10 rebounds.

The Lakers lifted last season’s championship banner to the rafters prior to the contest.

Los Angeles is one game behind the Dallas Mavericks and Portland Trail Blazers as it bids to avoid the play-in round. The Lakers are currently in seventh place and would be part of that round if the standings hold.

Kyle Kuzma steps through and rolls in the @Lakers game-winner! #PhantomCam pic.twitter.com/WlZiLKefHI

Markieff Morris tallied 14 points and Kentavious Caldwell-Pope and Alfonzo McKinnie scored 10 points apiece for the Lakers, who knocked down 57.1 percent of their shots, and hit 7 of 20 from 3-point range.

Anthony Lamb completed an 11-2 surge with a 3-pointer as Houston took a 72-71 lead with 7:13 remaining in the third quarter.

Los Angeles scored seven straight points late in the period to lead by seven. D.J. Augustin ended that streak by being fouled while shooting a 3-pointer with 3.4 seconds left and he made all three attempts to bring Houston within 100-96.