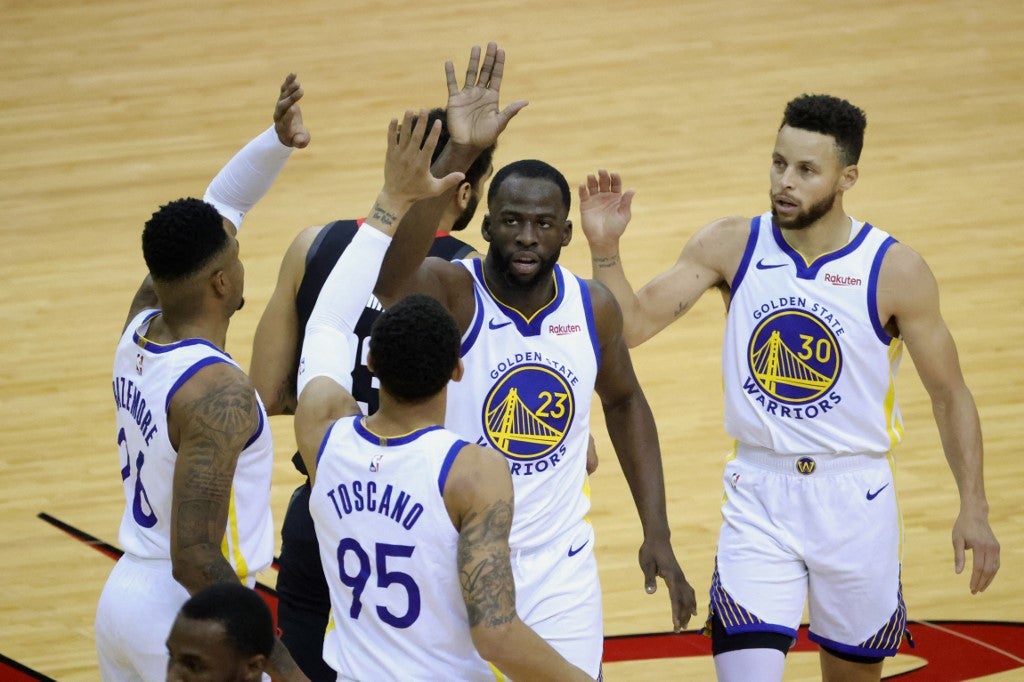 FILE – Draymond Green #23 of the Golden State Warriors high fives Kent Bazemore #26, Stephen Curry #30 and Juan Toscano-Anderson #95, during the first quarter of a game against the Houston Rockets at the Toyota Center on March 17, 2021 in Houston, Texas. Carmen Mandato/Getty Images/AFP

Stephen Curry scored a game-high 46 points en route to his second NBA scoring title and Jordan Poole stalled a Memphis rally with a late 3-pointer Sunday afternoon as the Golden State Warriors held off the visiting Grizzlies 113-101 in San Francisco to claim the No. 8 position in this week’s play-in tournament.

By virtue of their sixth straight win on a regular-season-ending homestand, the Warriors (39-33) put themselves in a position of having to be beaten twice in order to be denied a spot in the eight-team Western Conference playoff draw.

As the eighth seed, Golden State will tip off the play-in tournament on the road on Wednesday night against the Los Angeles Lakers.

GSW clinches #8 in the West and will take on #7 (LAL or POR) in the #StateFarmPlayIn Wednesday on ESPN! pic.twitter.com/xgw8bCVbEL

Hear from Steph after his 46-point performance!@warriors clinch #8 in the West and will play #7 (LAL or POR) in the #StateFarmPlayIn Wednesday on ESPN! pic.twitter.com/4cqKuRUfPP

The loss ended Memphis’ five-game winning streak and landed the Grizzlies (38-34) in the No. 9 spot in the play-in, where they will host 10th-seeded San Antonio on Wednesday.

With Curry scoring 17 of his 46 points, the Warriors appeared to take command of the game in the third quarter, building an 86-69 lead by period’s end.

But Dillon Brooks led a Memphis comeback. Before fouling out, Brooks contributed 13 points to a 22-5 flurry that produced a 91-all with still 6:32 to play.

The Grizzlies went up by two twice after that, the last time at 97-95 with 4:49 to go, before Poole nailed his momentum-changing 3-pointer 21 seconds later.

No longer hounded by Brooks, Curry then led a late Warriors runaway when he completed his big game with three consecutive 3-pointers, giving him nine for the game and a league-best 337 for the season.

Curry finished the season with a 32.0-point scoring average, claiming the league scoring title over Bradley Beal, who returned from a three-game absence to score 25 points earlier Sunday to finish at 31.3.

Poole added 15 points and Kevon Looney a team-high 11 rebounds for the Warriors, who outshot the Grizzlies 49.4 percent to 43.5 percent overall and outscored them 45-18 on 3-pointers.

All five Memphis starters scored in double figures, led by Jonas Valanciunas, who complemented 29 points with a game-high 16 rebounds.

Brooks finished with 18 points, while Ja Morant had 16 to go with nine assists, Jaren Jackson Jr. 14 and Kyle Anderson 10 for the Grizzlies, who also entered last year’s play-in tournament — a single game in the bubble last season — as the No. 9 seed, only to lose to Portland.