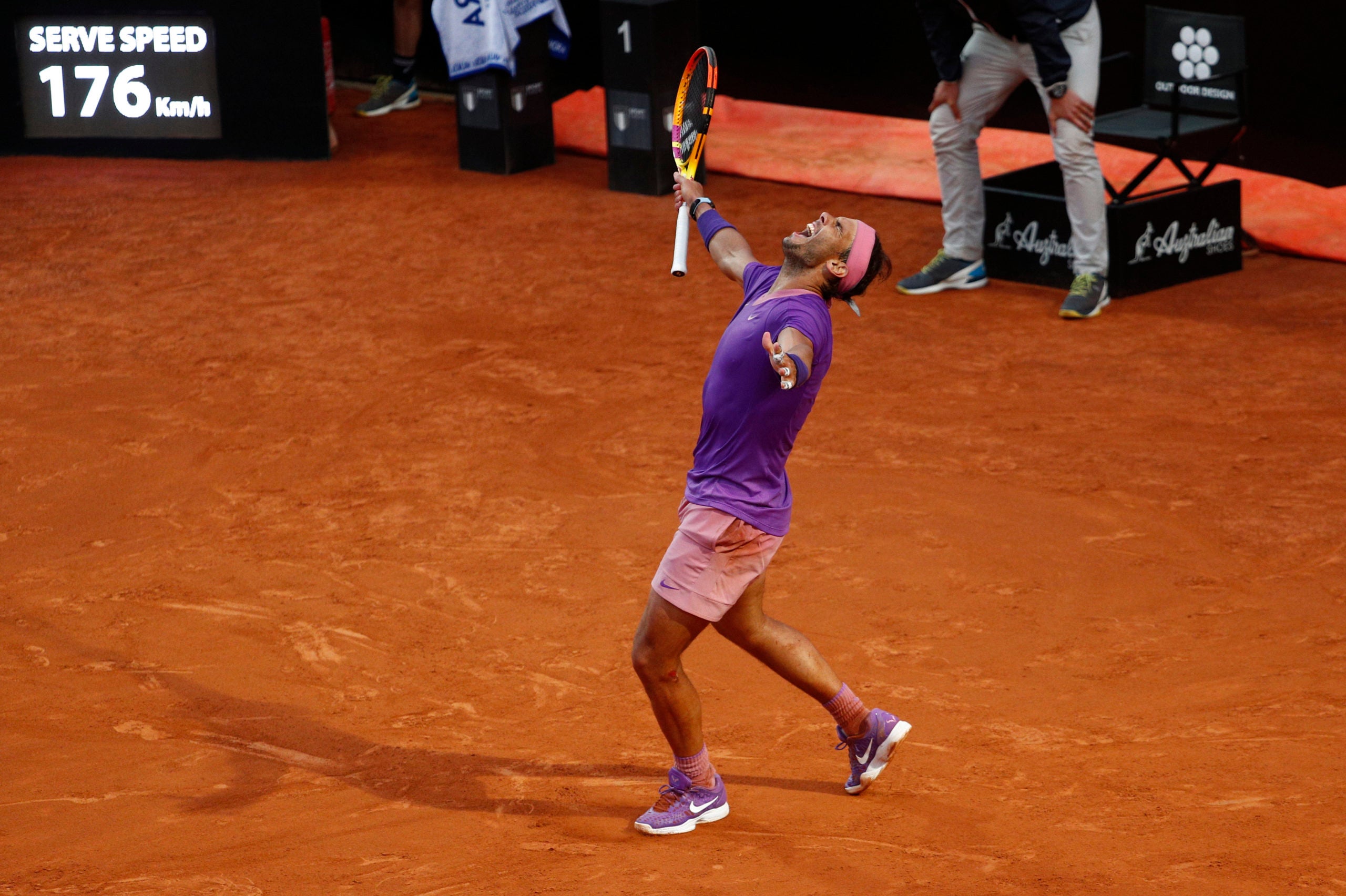 Rafael Nadal weathered a mid-match charge from rival Novak Djokovic on Sunday to win the Internazionali BNL d’Italia championship for the 10th time.

The second-seeded Spaniard’s 7-5, 1-6, 6-3 victory on the clay courts in Rome was his 36th ATP Masters 1000 crown, matching Djokovic’s record for the most since the series was established in 1990. Nadal also narrowed his deficit in his head-to-head series with Djokovic, who leads 29-28.

Another round of La Decima for Nadal, this time in Rome! 🏆

“I think I played a good tournament. I have been playing better and better, finding my rhythm on clay,” Nadal said after winning in two hours and 49 minutes. “I had a very positive week and I’m very happy.

“It’s amazing to have this trophy in my hands for the 10th time. It’s something impossible to imagine but it happened so I’m super happy and can’t thank my team enough.”

The Italian Open is Nadal’s fourth event with double-digit titles, along with the French Open (13), Barcelona (12) and Monte Carlo (11).

Djokovic, the top seed and World No. 1, entered the Italian Open final after playing nearly five hours of tennis on Saturday. The Serbian star outlasted Stefanos Tsitsipas of Greece in the quarterfinals and Italian Lorenzo Sonego in the semifinals — both three-set matches.

Djokovic, a five-time winner in Rome, has not defeated Nadal on clay since the quarterfinals here in 2016.

Nadal broke Djokovic’s serve to go ahead 6-5 in a competitive opening set, then put away his second set point with a powerful forehand.

Djokovic jumped ahead 5-1 in the second set and leveled the match on his third set point on a backhand error by Nadal.

Serving at 2-2 in the deciding set, Nadal fought off a couple of break points and fired a shot down the line to hold. He broke Djokovic at love in the following game and maintained the momentum through the finish. Djokovic sent a backhand long on Nadal’s second championship point to end it.

This was the sixth time Nadal and Djokovic clashed in the final in Rome, with Nadal improving his lead to 4-2.

Djokovic found the silver linings, even in defeat.

“I was happy to play him because of fine-tuning for Roland Garros. It doesn’t get bigger of a challenge on clay than playing Rafa in finals,” Djokovic said. “I could have easily gone out of this tournament in quarters. I’m very pleased with my fighting spirit. The level of tennis was higher and higher, actually.

“Yesterday I played great. Today I thought I also played a high level. Unfortunately the decisive moments in the first and third set, you know, just went his way. It was a bit unfortunate.

“But overall almost three hours of high-quality tennis. I’m disappointed not to win it, but at the same time I’m very pleased with the level of tennis I managed to find in the later stages of this tournament.”

Read Next
Nets clinch second seed in East with easy win over Cavs
EDITORS' PICK
House energy committee chair Arroyo bats for cheap electricity
Honolulu Café is the cure for your Egg Tarts and Roastings cravings
OVP: Pilot’s claim vs Robredo ‘never happened’, a ‘malicious fabrication’
Petition to reverse Comelec decision on Bongbong Marcos’ DQ case reaches SC
Luxe property: A way to build, preserve wealth
PH detects local transmission of Omicron subvariant BA.2.12.1
MOST READ
Congress canvassing of votes for president, VP to begin May 24
Heart Evangelista gets a ‘no’ from Chiz Escudero after asking, ‘Do I deserve a bag?’
Man posing as Marcos spox revealed to be an inmate in Bilibid — Guevarra
Closure order vs Megaworld Corp halted as firm vows cooperation with BIR – exec
Don't miss out on the latest news and information.