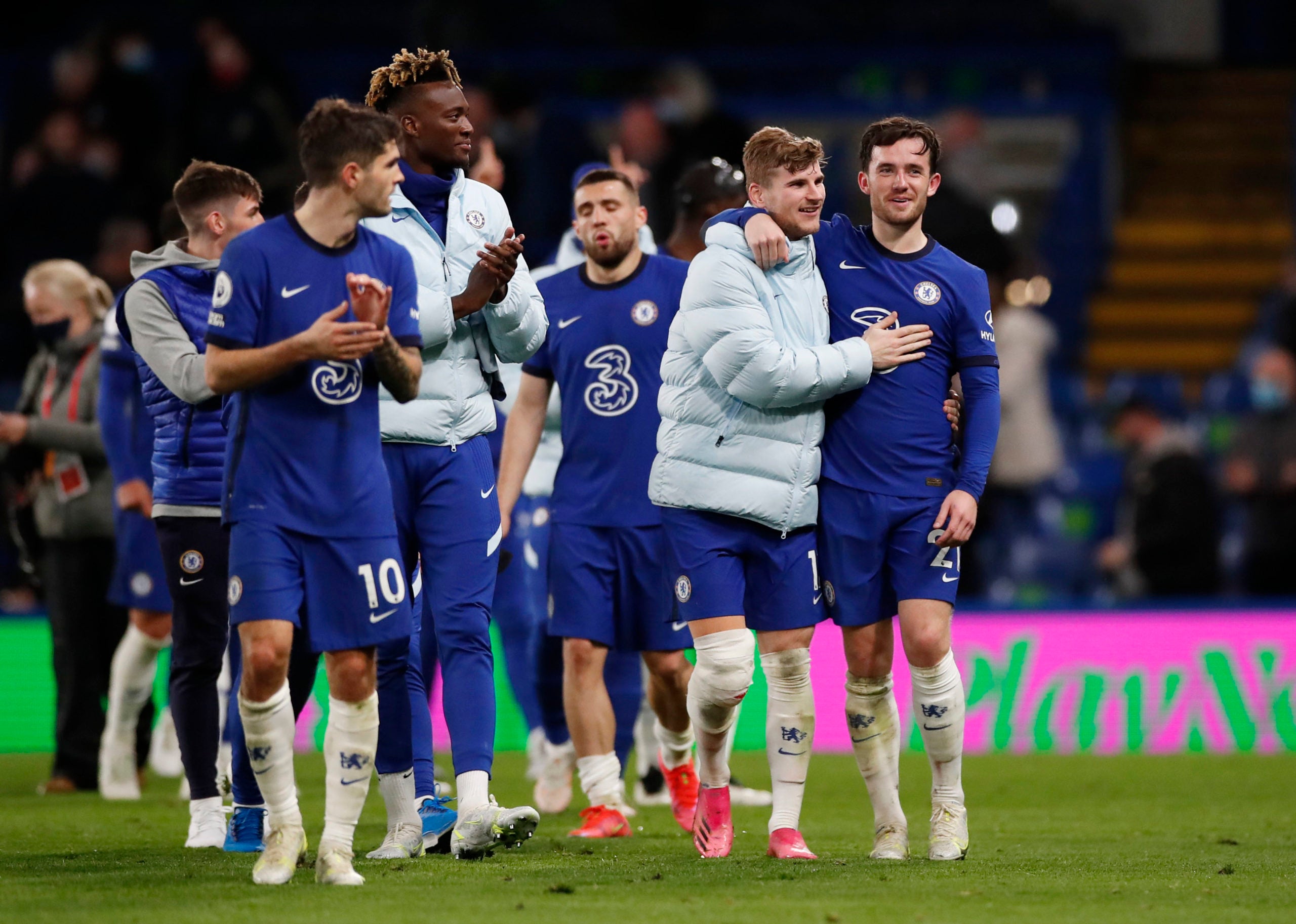 LONDON–Chelsea seized control of its destiny in the Premier League top-four battle as they avenged its FA Cup final defeat by Leicester City to beat them 2-1 at Stamford Bridge on Tuesday.

Roared on by 8,000 fans, Thomas Tuchel’s side dominated and was rewarded after the break with Antonio Rudiger bundling in their opener before Jorginho rolled home a penalty.

Timo Werner twice had goals ruled out before the break while Leicester, who looked flat after Saturday’s celebrations, offered little threat until Kelechi Iheanacho gave the visitors a lifeline with a cool finish in the 74th minute.

It was a nervy climax and Ayoze Perez wasted a glorious late chance to equalize but Chelsea clung on for a priceless win that moved them into third place on 67 points with one game remaining, meaning a win at Aston Villa on Sunday will guarantee them Champions League football next season.

For Leicester, there is now the looming possibility that they will let a Champions League berth slip through its fingers for the second season in succession.

A win would have ensured a top-four finish but they will drop to fifth if Liverpool wins at Burnley on Wednesday.

Leicester, who has 66 points, finishes with a home game against Tottenham Hotspur while Liverpool’s final game of the season is at home to Crystal Palace.

“Fantastic. It was an outstanding performance but the job is not done,” Tuchel said. “We have two more to go. The fans made a huge difference. The speed in our game, the hunger, the ambition. It was a very strong performance and I’m delighted the team can present itself like this in front of our fans.” Leicester has been in the top-four since January but could now miss the Champions League jackpot, as they did last season.

Chelsea flew out of the traps with Christian Pulisic just failing to turn in a cross and Reece James drilled a shot narrowly wide. Leicester keeper Kasper Schmeichel, magnificent at Wembley on Saturday, then made a sharp save from N’Golo Kante who, worryingly for Chelsea, went off injured before halftime.

Werner thought he had scored in the 21st minute when he was played in by Mason Mount but he had drifted just offside.

The German was celebrating prematurely again before the interval when Cesar Azpilicueta flicked on a corner and Werner turned the ball just over the line before it was cleared.

While the ball had definitely crossed, a VAR check showed that Werner’s arm had made the final contact.

Leicester’s luck ran out in the 47th minute when a Chelsea corner skimmed off the head of Jamie Vardy who was back defending and Rudiger forced the ball in.

When Iheanacho swept in after a mistake by Mateo Kovacic it looked as though Leicester could get out of jail and Perez should have earned them a late point when, with the goal gaping, he fired a gilt-edged chance over the bar.

Tempers flared in stoppage time with virtually every player on the pitch involved in a mass shoving contest near the touchline after Rudiger pushed Ricardo Pereira.

When the dust settled it was Chelsea who had one foot in the Champions League, whatever happens in this month’s final against Manchester City in Porto.