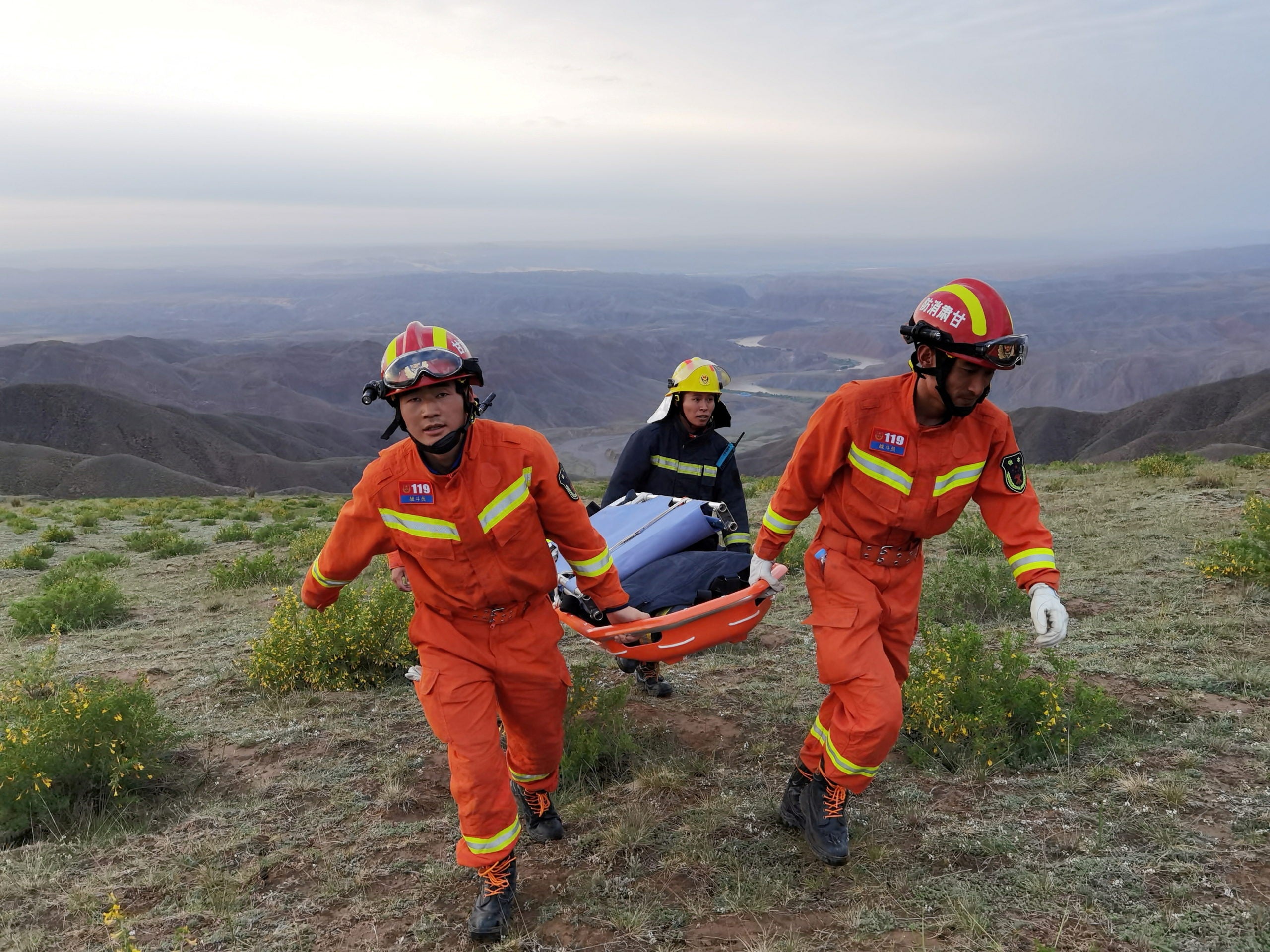 FILE PHOTO: Rescue workers carry a stretcher as they work at the site where extreme cold weather killed participants of an 100-km ultramarathon race in Baiyin, Gansu province, China May 22, 2021. cnsphoto via REUTERS

BEIJING – Long-distance runner Zhang Xiaotao was in the leading pack of the ultramarathon race in China in which 21 people died from hypothermia after being drenched by freezing rain and buffeted by gale-force winds on a mountain trail.

Of the half dozen frontrunners, Zhang was the only one to survive Saturday’s disaster in the highlands above the Yellow River in northwest China. Recovering from his ordeal, 29-year-old Zhang recounted how he was found unconscious by a herdsman who carried him to safety.

“I pressed SOS on my GPS tracker and then I passed out,” Zhang wrote in a post a day later on Weibo, a Twitter-like microblog popular in China.

“I was unconscious on the mountain for about 2-1/2 hours until a herder passed by and carried me to a cave.”

“He set up a fire and wrapped me in a quilt. And after another hour or so I woke up.”

“I’m most grateful to the big uncle who saved me, because without him, I’d still be lying there. I’ll never forget the new life that he has given me!”

Zhang said that despite his exhaustion he was unable to sleep on Saturday night as he awaited news of his fellow runners.

The last of the 21 victims was found dead on Sunday morning.

Mounting anger on social media was amplified by news that two elite marathon athletes were among the dead.

At a news conference on Sunday, officials in Baiyin, a depressed mining city in Gansu province, bowed and apologized, saying they were to be blamed.

Organizers of the Jingtai ultramarathon had halted the race at 2:00 p.m., two hours after runners sought help in mobile messaging groups, state-run Xinhua news agency reported, citing several participants who said they had received no notice of the suspension before they lost consciousness or suffered injury.

“The organizer should have had people stand by in the tough section of the trail, or deployed more rescuers. They should also have set mandatory rules on runners bringing outdoor jackets,” Zhang said.

Protective gear such as warm jackets was recommended, not mandatory, in a list provided by the organizers, the official Xinhua news agency reported on Monday.

Most runners had set off in that ill-fated race wearing t-shirts and shorts. Some survivors described how their silver thermal blankets were ripped to shreds by the strong winds.

China’s top sporting body convened an emergency meeting on Sunday night in response to the tragedy.

“The Baiyin ultramarathon is a public safety accident due to sudden changes in local weather. The lesson was a very painful one.”

A day before the race, Zhang wrote on his WeChat page: “One hopes that one reaches his destination each and every time.”