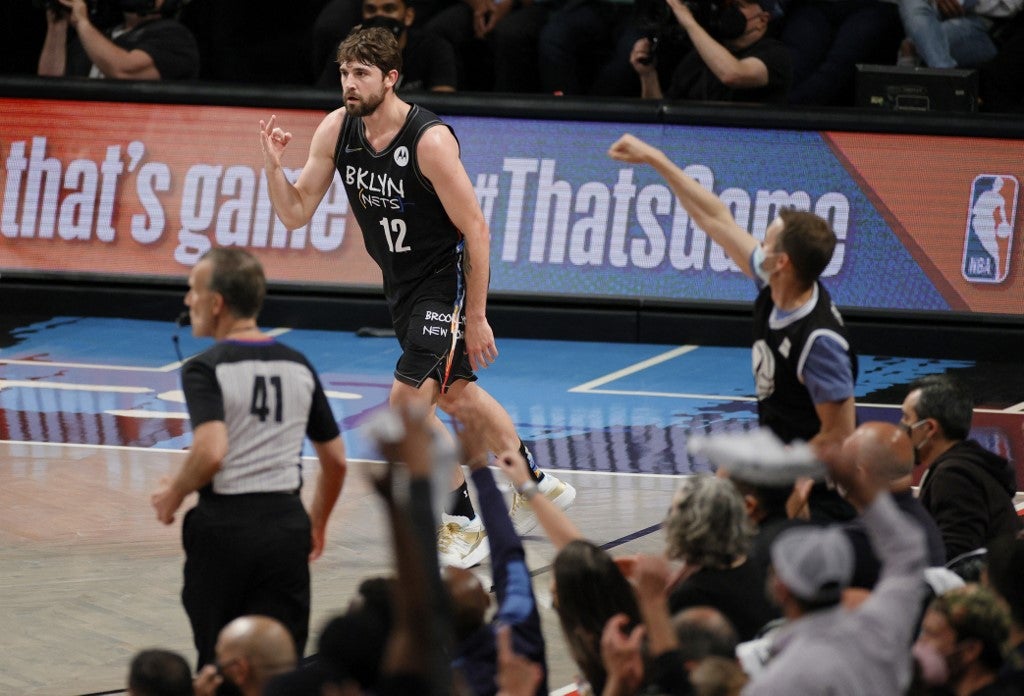 NEW YORK, NEW YORK – MAY 25: Joe Harris #12 of the Brooklyn Nets reacts after making a three-pointer during the first half of Game Two of their Eastern Conference first-round playoff series against the Boston Celtics at Barclays Center on May 25, 2021 in the Brooklyn borough of New York City. Sarah Stier/Getty Images/AFP

Kevin Durant scored 26 points, Joe Harris added 25 as the Brooklyn Nets seized control early and cruised to a 130-108 victory over the Boston Celtics in Game 2 of their Eastern Conference first-round series.

The second-seeded Nets lead the series 2-0 with Game 3 on Friday in Boston.

Durant added eight rebounds, five assists, four blocked shots and made 8 of 12 shots as the Nets shot 52.3 percent and hit 17 3-pointers. The sharp-shooting Nets missed only one free throw, going 21-for-22 in the victory.

Harris hit seven of 10 3-point tries to tie the franchise record for 3-pointers in a playoff game set by Deron Williams in 2015.

The Celtics received a quiet game from Jayson Tatum, who was held to nine points on 3-for-12 shooting. He is shooting 9 of 32 from the field in the series and exited after getting poked in the right eye during the third quarter.

After a sluggish start to their 104-93 win in Game 1 on Saturday, the Nets dominated from the outset and led by double digits for the final 37:10.

Brooklyn took control by ripping off 15 straight points in a span of 2:57 to take a 29-13 lead on a 20-footer by Jeff Green with 4:57 remaining. Green’s shot occurred after Harris hit three 3-pointers in a span of 59 seconds and the run helped the Nets get a 40-26 lead through the opening quarter.

Harden’s four-point play gave the Nets their first 20-point lead less than two minutes into the second. When Harris hit his sixth 3-pointer, Brooklyn held a 61-36 lead at the 4:59 mark and it took a 71-47 lead by halftime.

Harris made his seventh 3-pointer midway through the third and Brooklyn held a 109-82 lead into the final period.